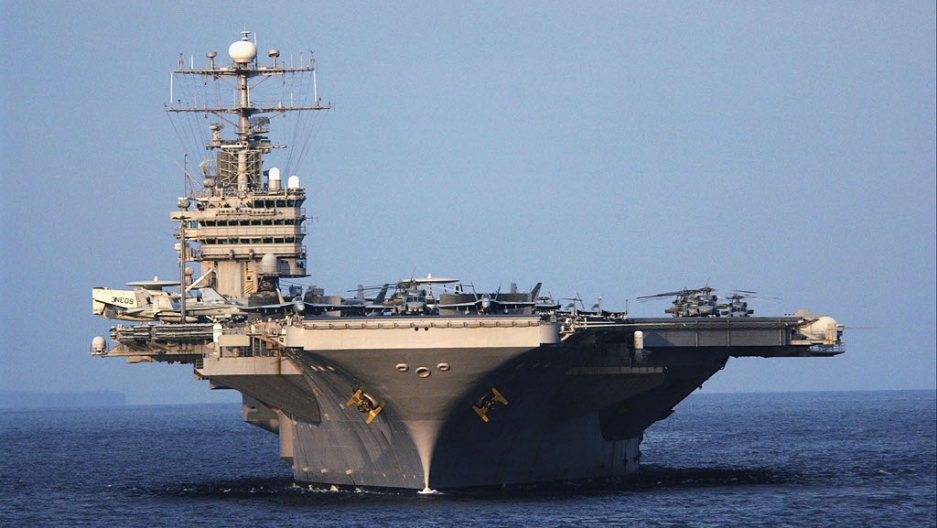 The aircraft carrier USS Abraham Lincoln and its battle group have been on patrol in the Strait of Hormuz. Iran has threatened to close the Strait in response to EU sanctions on the import of Iranian oil.
Credit: U.S. Navy
Share

The US Navy has deployed a fleet of small underwater drones to the Persian Gulf for a minesweeping mission in a show of strength after Iran threatened to disrupt a key shipping route there, reported the LA Times.

US officials told the LA Times the SeaFox fleet's arrival is meant to send a message to Tehran, where some officials have hinted at possibly blocking the key shipping channel between Iran and Oman in retaliation for a fresh round of Western-backed sanctions hitting the Islamic Republic over its controversial nuclear program.

The West fears Iran is aimed at developing nuclear weapons, a charge the Islamic Republic denies.

Tehran earlier warned to shut the waterway “in response to increasing sanctions and in the event Iran is attacked," said The Daily Beast.

US officials expressed concern about any possible disruption in the strait, a transit point for a fifth of the oil traded worldwide, according to the LA Times.

Retired commander Christopher Harmer, who used to head key Navy operations Bahrain, told the LA Times that the Islamic Republic has recently developed a series of tiny submarines that can place new mines in a bid to block the strategic strait -- an event experts say is unlikely.

The fleet of tiny, four-feet-long unmanned television-equipped SeaFox drones, obtained by rush-order from Germany at $100,000 each in May, are capable of detecting the underwater mines placed in the gulf by Iran during its war with Iraq in the 1980s, said the LA Times.

The US drones started showing up as part of a recent military buildup in the Gulf that also saw the arrival of Sea Dragon helicopters and minesweeping ships, said the Digital Journal.