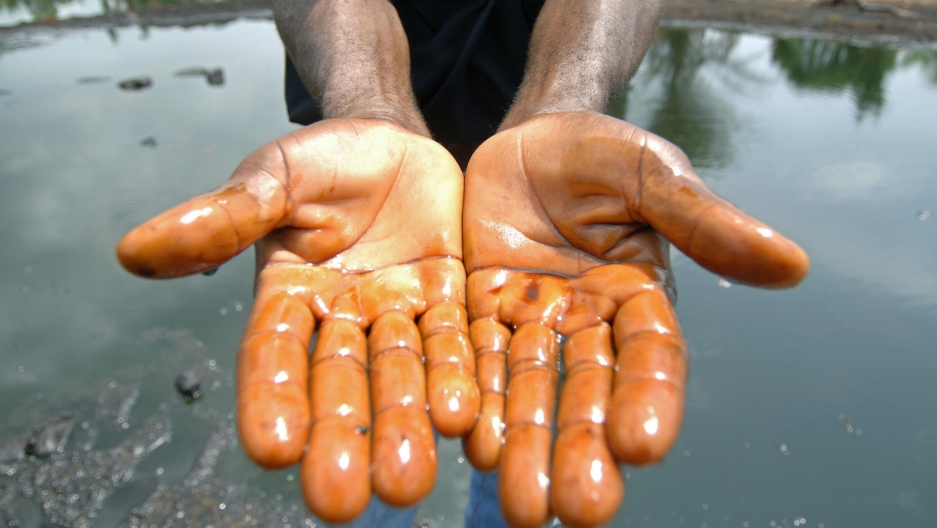 A man shows his crude-oil covered hands near an abandoned leaking well head in Kegbara Dere, Nigeria. The illegal oil business here is operating in defiance of the government.
Credit: Lionel Healing
Share

Along the shores of rivers and creeks, burnt-out artisanal refineries continue operating in defiance of the Nigerian government. Masked gunmen do not guard these refineries, as one might expect, only weary-looking villagers who say they just want to make a living.

The Niger Delta is home to some of Africa’s largest proven oil reserves, giving rise to an industry that is the fifth largest oil supplier to the United States and is dominated by international oil companies.

Local Nigerians, however, have long complained that the profits never reach them. Most live in abject poverty and have turned to stealing oil from corporate pipes to refine themselves and sell on the black market.

More from GlobalPost: Niger Delta: Rebels without a job

Barely hidden by palm trees, barrels of crude oil coated in soot can be seen from the rivers and creeks outside of Warri, a major Nigerian oil city. They are propped up over wooden fires as fuel dribbles out of spigots. It is refined in the same way Nigerians make their local palm wine. Wearing long rubber boots as they slosh through the oil-drenched mud, families monitor the barrels.

Women and children paddle canoes loaded with yellow, fuel-filled jerry cans toward the city where they hope to sell it. Teenage boys guide large corroding wooden boats into the creeks, which are presumably filled with stolen crude.

Godfry, a lanky man in black boots flanked by his wife and two of his children, said it should be legal for communities to live on their own resources, and that the oil should belong to the people.

“Do you think I’m happy to stay in this dirty place? I am not happy,” he said. “If the government can encourage us and say ‘go and do this’ we are ready.”

Oil spills and gas-flaring have devastated many of the Niger Delta’s other natural resources, making the illegal oil trade one of the last remaining ways to make money here. In the past, residents had relied on fishing or farming to survive.

These illegal refiners blame the oil companies for destroying the ecology and the government for not developing the economy. They say the fish have been killed by oil spills and the soil is too polluted to farm. And despite the vast stores of oil and natural gas, there are not enough legal jobs to go around.

Most of the Niger Delta’s 31 million people live on less than $1 a day.

Between 2003 and 2009, armed gangs trolled the waterways, fighting for a share of their own resources. After a 2009 peace deal, the militants turned in their weapons to pursue an education. But many say they still struggle to find jobs. An ever-present threat of a return to violence hangs over the region.

International oil companies operating in the Niger Delta, including Royal Dutch Shell and Chevron, claim to be losing more than a billion dollars a month in proceeds due to the informal oil industry.

They also claim that it is the illegal oil operations that are responsible for the oil spills.

“This is more than Nigeria losing money from lost production, costly repairs and clean-up and facility downtime,” said Shell’s managing director, Mutiu Sunmonu, in a press release. “It is a sad story of consistent pollution of farm lands and rivers by people who are not bothered by the effects of their actions on the environment.”

The illegal fuel business, however, has given some families here a chance to send their children to school in the city — something a sustenance farmer could probably never afford.

One refiner, who didn’t want to give his name for fear of being arrested, said the fuel he sells changes hands many times and everyone is in on the game, including security forces that require “fees” to look the other way.

When asked if his men are involved in the illegal oil trade, Lt. Col. Onyema Nwachukwu, the media coordinator for Nigeria’s security forces in the Niger Delta, was defiant.

“I’ve had cause to defend a number of such insinuations on the pages of newspapers,” he said. “They want to call the dog a bad name so they can kill the dog. Then when the dog is out of the way they can have a field day. After all, the watchdog is no longer there.”

Nwachukwu said security forces in the Niger Delta this year shifted their focus away from fighting militants, who are at least for now less of a threat, to containing the illegal oil trade. What was once “Operation Restore Hope” is now known as “Operation Pulo Shield.”

He said while 86 arrests have been made, and almost a thousand illegal refineries burned, security forces in Nigeria are “stretched thin.”

Government officials say the illicit oil trade threatens the economy, security and the environment. But they often don’t blame the people for stealing and selling the oil. Indutimi Komonibo, a special advisor on oil and gas to the governor of Bayelsa State, said everyone shares responsibility.

“The oil companies need to be blamed also, you know,” he said. “We are losing so much as a nation to oil theft and I think [it should be] all hands on deck for that to be curbed.”