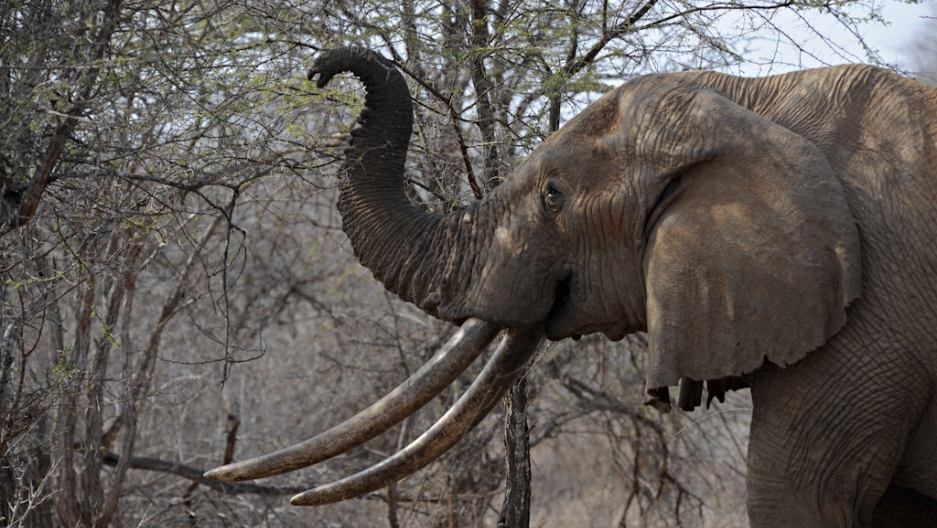 An elephant uses its trunk to reach the upper branches of a tree over the dry brush as it searches for food at the Tsavo West National Park in southern Kenya on August 21, 2009. Poaching for elephant and rhino tusks has been on the rise in Africa since the 2007 partial lifting of an international trade ban to allow a one-off sale to China and Japan by Botswana, Namibia, South Africa and Zimbabwe, the Kenya Wildlife Service said.
Credit: ROBERTO SCHMIDT
Share

JOHANNESBURG, South Africa — An animal rights group in South Africa has condemned plans by neighboring Namibia to donate a "Noah's Ark" of wild animals to Cuba.

Under the project, 146 wild animals, including elephants and endangered rhinos, cheetahs, lions and leopards, will be sent from Namibia's Waterberg Plateau Park, north of the capital Windhoek, to Cuba's 342-hectare National Zoological Park on the outskirts of Havana.

Namibia says the $1-million donation of animals will be in line with the UN's Convention on International Trade in Endangered Species (CITES).

But South Africa's National Society for the Prevention of Cruelty to Animals expressed "disgust," saying the animals will have to endure long, stressful flights from Namibia to Cuba.

The NSPCA also expressed concern about the facilities and standard of care for the animals in Cuba.

"It is saddening to note that these animals will be taken out of their natural habitats and sent to a strange land where they will be deprived of freedom and be totally dependent on humans for their daily needs," the group said in a statement.

The project dubbed "Noah's Ark II" was agreed to during a 2009 visit by Cuban President Raul Castro to Namibia, a southern African country with few people and vast expanses of desert.

Namibia's close ties with Cuba date back to the African nation's struggle for independence in the 1970s and 80s.

The animals will be flown out starting in early October.

The Cuban park's director, Miguel Luis Abud Soto, said the donation would improve the gene pool of its animals.

"Our government has set aside some millions for this project and the park underwent construction, remodeling and maintenance... they will be able to move around semi-freely," the Namibian newspaper quoted him as saying.

"We will try to give the animals good treatment. We will have to feed them well," Soto promised during the signing ceremony, the New Era reported.