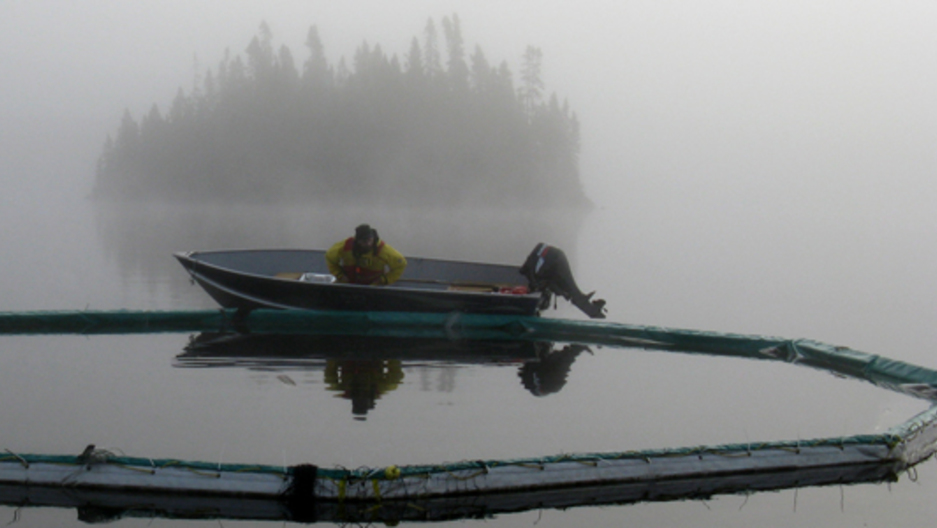 A biologist checks the fishing nets in Lake 240, as part of an experiment examining the effects of flame retardants, found in TVs and couches, on lakes. The study showed the chemicals break down into even more toxic substances. (Photo courtesy of Diane Or

Hundreds of scientists in white lab coats took to the streets this week in the Canadian capital of Ottawa.

The scientists and their supporters marched outside Parliament, chanting, “No science. No evidence. No truth. No democracy.”

It was a mock funeral at which protesters said they were mourning the “death of evidence.” They charged Prime Minister Stephen Harper with muzzling government scientists and slashing environmental research.

One of the triggers for Tuesday’s protest was a high-profile fight over an unlikely place — a little-known research facility deep in the Canadian forest. Riding along a twisting gravel road in western Ontario, just north of Minnesota, black spruce trees and scraggly jack pines hug the road.

Every couple of minutes, another lake peeks through the trees.

“Just up around the corner here is where the restricted area begins,” said John Shearer, driver and guide.

The “restricted area” is an outdoor laboratory where Shearer worked for almost 40 years. He retired recently as the senior biologist and operations manager at this government facility.

“There are probably close to 1,000 lakes within a 20 mile radius of where we’re standing now,” he said after stepping from the car.

Scientists know these lakes incredibly well. They’ve all been numbered. Shearer points to Lake 626, just beyond a culvert. Down the road and through the trees is Lake 442.

These lakes have been the sites of numerous experiments. In fact, some of the most influential environmental research in recent decades has been done in the Experimental Lakes Area.

Much of what we know about the effects of acid rain comes from experiments here. Scientists slowly poured acid into one of the lakes and watched what happened.

Another study showed that adding phosphorus to lakes triggers massive blooms of algae. That led to a ban on phosphates in detergents in the United States and Canada. Researchers always clean up the lakes once an experiment is finished.

This outdoor facility offers a rare opportunity to do large-scale experiments in nature.

“Scientists can change conditions in a whole lake system, as opposed to a test tube or a flask,” Shearer said.

But after more than four decades, this unique outdoor laboratory may soon shut down. The Canadian government announced recently that it would cease operating the facility as of next spring.

Shearer says when he heard the news, he was astonished.

“It’s hard to believe that any facility that has led the world in freshwater research could not be important to the federal government of Canada, [which] has so much freshwater within its boundaries," he said.

Shearer agreed to flout that ban because he’s retired; he has nothing to lose. But others say they have a lot to lose if the Experimental Lakes Area shuts down.

“There will be no jobs for me as a scientist,” said Diane Orihel, a University of Alberta graduate student who studies water pollution. “I’m going to leave the country.”

Orihel has founded a coalition of scientists and citizens who are lobbying to save the Experimental Lakes Area. She says her team has gathered 17,000 Canadian signatures.

Orihel believes the planned closing of the Experimental Lakes Area is part of a larger shift in her government’s attitude toward science.

“I think that the government is shutting down ELA because it does not want the information that ELA generates,” she said. “It gets in the way of economic development.”

As Orihel sees it, the conservative government of Prime Minister Stephen Harper is intent on rolling back environmental protection and research while it promotes the extraction of natural resources, particularly Canada’s oil sands.

For its part, the government says its decision to close the lakes area was simply a matter of finances. Canada is hundreds of billions of dollars in debt, and the facility was one of a number of programs sacrificed in a deficit-reducing measure. Operating the area costs about $2 million a year.

“This is not a decision that reflects on the quality of the science that has been done,” said Dave Gillis of Canada’s Department of Fisheries and Oceans, one of the agencies that operate the ELA.

In fact, he said, the lakes may yet remain open. The government is hoping another institution — perhaps a university — will take over operations.

“Our energies right now are focused on identifying an alternate operator for the ELA site,” he said, “so that that type of research can be conducted on into the future under new management.”

But critics find this plan vague and unrealistic. No institution has stepped forward, and the expected closure is now fewer than nine months away.

If the facility does get shuttered next spring, some experiments will have to stop before they’re even complete. Chris Metcalfe of Trent University in Peterborough, Ontario, is leading a team that is studying how lake ecosystems are affected by nanosilver. The substance is used as a disinfectant in a growing number of consumer products, including laundry detergents.

“The Experimental Lakes Area is the only place where you can do that kind of work,” Metcalfe said. “It’s invaluable.”

It’s not only the looming closure of the Experimental Lakes Area that has scientists frustrated.

The government has decided to stop funding Canada’s northernmost research lab, the Polar Environment Atmospheric Research Laboratory, which has been used to study ozone loss over the Arctic. As a result, the lab has had to halt year-round operations.

Last month, the Canadian Parliament passed a law that scaled back environmental assessments and the protection of endangered species.

All of this is what led to this week's protest in Ottawa, where hundreds of scientists gathered.

“I know that most of you would much rather be in your labs doing what you do best, but we’re at a critical point in Canadian history,” said Katie Gibbs, a Ph.D. student and one of the organizers of the protest. “If we don’t stand up for science, nobody will.”

The Harper government issued a written statement in response to the protest.

“While the government is returning to a balanced budget, science, technology and innovation remain a strong priority," it said.