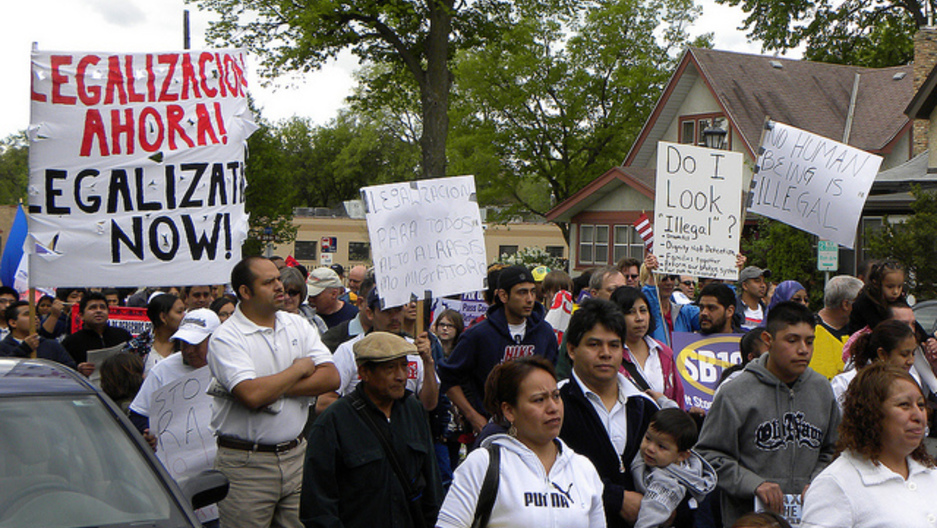 An estimated one million people are deported from the United States each year. (Photo by Fibonacci Blue via Flickr.)

Immigration has become one of the biggest issues this election season.

In recent weeks, the Supreme Court decided to uphold parts of the tough anti-immigration law in Arizona. That decision came just a few weeks after President Barack Obama announced that thousands of young illegal immigrants who were brough to the country as children could remain in the U.S.

Now, Daniel Kanstroom, law professor at Boston College, and author of “Aftermath,” a new book on deportation law and the new American diaspora, is questioning the effectiveness of deportation as an immigration policy.

“You often get the sense that there’s been little or no real enforcement taking place, that the situation is completely out of control. But the fact is that there’s another reality that’s been true for quite some time in this country, and that is that we’ve actually been engaged in a radical social experiment with massive deportation enforcement," Kanstroom said. “It’s a very peculiar thing, both historically and comparatively. And it’s especially strange for a nation of immigrants, which is what we still call ourselves.”

With his effort, Obama has given immigrants brought to the U.S. as children the right to stay in the country legally, indefinitely but not permanently, but he has also deported more immigrants than any other president.

Informal mechanisms, like expedited removal and reinstatement of removal, account for about one million deportations each year.

According to Kanstroom, part of the problem is until Obama's decision to suspend deportations of certain young immigrants, there was little room for discretion in deportation cases. That resulted in a system that is very harsh, very rigid and very disproportionate, he said.

“The fact is that, without Congressional movement on this, without a comprehensive immigration reform policy, it’s very difficult for the president to articulate a legitimate solution that can be done by the executive branch alone,” Kanstroom said.

Hundreds of thousands of people, who were long-term, legal permanent residents of the United States, have already been deported, Kanstroom said.  Many of them were deported because of legal interpretations that have now been deemed wrong by the Supreme Court.

Kanstroom believes the government was overzealous in a lot of these cases in the first years of the mass-deportation experiment.

Around the world, there are communities of Americans who were deported despite the fact they were raised in the United States and speak English as their primary language, Kanstroom said. They were separated from their U.S. citizen children, or their parents and loved ones, with no way to return.

Kanstroom, along with Boston College researchers, has researched the effects of deportation on children and families in New England.

His research follows U.S. citizen children who, because of the deportation system, have been brought back to countries like Guatemala and Cambodia, despite their American citizenship.

“In Cambodia, there are many young men who were deported there, who have left behind elderly parents who need care, who need help. And now those families are separated,” he said.

Kanstroom has extensively researched this particular form of deportation, which he calls, "post-entry social control deportation." It applies to people who are otherwise legally in the U.S.

“People don’t talk about this as much as they talk about the undocumented problem, which is a serious problem," he said. "But these other deportations are large numbers as well."

Sociologists have determined recently that these efforts have had minimal effect on reducing crime.

“In fact," Kanstroom said, "we’ve deported lots of low-level offenders, but it really does very little, if nothing, to control crime in communities, and in fact, part of the problem with initiatives like those that are being undertaken in Arizona, is that it’s distracting police resources from real crime-fighting.

Kanstroom says comprehensive reform of labor-related visas is needed, focused on streamlining and offering a comprehensive expansion of the visa system.

It is also necessary to build back in ideas of proportionality and discretion into the enforcement system, with recognition that people shouldn't be deported and separated from their family for committing misdemeanors, he argues.

“Sometimes I hear people saying, ‘These people broke the law. Period,’ and what I’m suggesting is that really, after you say somebody has broken the law, even if they have broken the law, it’s not a period, but it’s a question mark that follows," Kanstrrom said. "We need a more sophisticated and a more humane system. I think that is consonant with our better traditions, and would provide a better way forward."