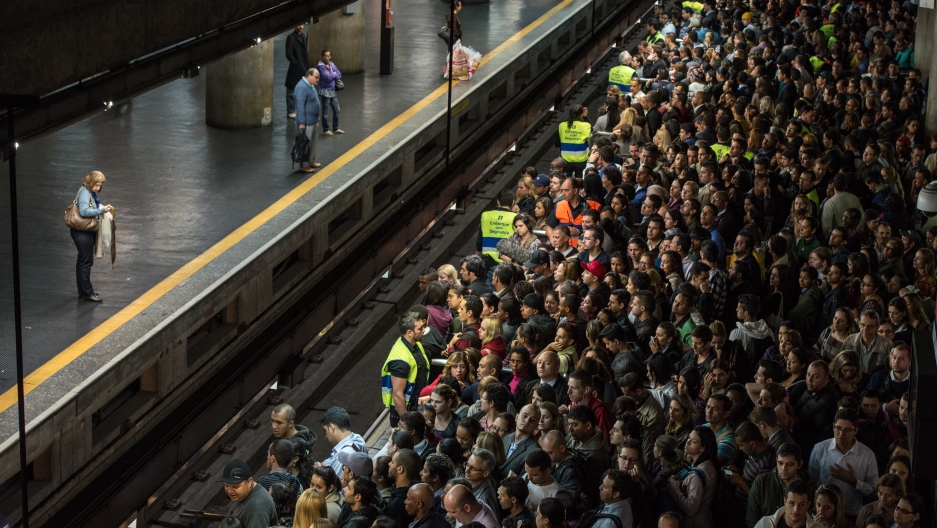 Commuters wait to board a train during the evening hours at Se metro station in Sao Paulo, Brazil.
Credit: Yasuyoshi Chiba
Share

SAO PAULO, Brazil — This business hub, South America’s largest city, is usually bustling from dawn until dusk. But on a recent Wednesday morning, Sao Paulo ground to a halt.

Subway and train workers, disgruntled about poor wages and benefits, had gone on strike, leaving more than 4.8 million commuters without a ride. Buses still made the rounds, but these are packed on normal days. They didn't help much, with rush-hour traffic in the maze-like city at a standstill. A usual hour-and-a-half journey across town took three hours.

But Sao Paulo isn’t the problem. Brazil's population and economic growth have pushed it to the brink. Whether by road, rail or air, the country is unprepared to handle rising transport demand. Now, the 2014 World Cup and 2016 Olympic Games approaching, host country Brazil’s transportation revamps are more pressing than ever.

Consider Sao Paulo’s Guarulhos International Airport. Both Forbes (in 2008) and CNN (in 2011) voted it one of the most hated in the world. With 41 percent of departing and 59 percent of arriving flights on time, it’s no wonder.

Guarulhos clearly has a gap to fill — or unclog.

Marcio Fortes is president of the Olympic Public Authority for the 2016 Rio Games and the government's former minister of cities. He insists it can — and will — be done.

“We have to improve the situation with the airports. It’s not because of the World Cup or because of the Olympic Games. It’s because we needed to do it anyway,” Fortes says. “It’s just the consequence of the growth of this sector in Brazil. [The airlines] are determined nowadays to have a lot of passengers and to have them fast.”

As of 2010, the airport could move 24.9 million people per year but demand was at 26.8 million, according Fortes' statistics. That demand is expected to climb to 38.9 million passengers by 2014, about 45 percent above the 2010 rate, he adds. But not to worry, says Fortes, the international airport will be revamped by then. With a budget of about 1.8 billion reais ($887 million), it should be able to handle some 52.7 million travelers.

More than an airport facelift is needed, however. The streets are plagued with potholes seemingly big enough to swallow the average hatchback car. The many peaks and valleys across the country make for difficult road maintenance. Subways and trains are also in desperate need of care. Brazil must work harder, and faster, to unclog choked roads and railways, say international observers — especially those eyeing the preparations for upcoming sporting events.

The world soccer body, FIFA, has not minced words. In March, FIFA General Secretary Jerome Valcke said Brazil needed a “kick up the backside” to finish its World Cup preparations on time.

FIFA usually stays out of countries’ transport business. But now the soccer organization has decided to step up its involvement.

FIFA officials have met with Brazil’s Local Organizing Committee, and with officials from Brazil's World Cup host cities. Now the world soccer organization has made the decision to create a special group dedicated to overseeing aspects of the tournament’s planning, including urban, national and international transportation.

“This clearly underlines the significance that is given by the various stakeholders to the matter of transport,” according to a FIFA spokesman.

Brazil has invested large sums to improve urban transportation ahead of the World Cup. With 500,000 soccer fans expected to attend matches in 12 cities across the country, federal, state and municipal governments have invested more than 12 billion reais ($5.9 billion) to improve city streets and highways, and to update subway and train systems, as well as build new lines to better crisscross cities.

Buses have long been overburdened with compensating for the other system shortfalls. Some 94 percent of commutes are by bus, according to the national public transport group ANTP.

“Public transportation — particularly bus transportation, which is the only mode in most cities — does not offer a good and reliable service,” says Claudio Barbieri da Cunha, associate professor of transportation engineering at the Universidade de Sao Paulo.

“I often say that for many people, riding a bus is not a choice, but a lack of choices,” he said.

Despite a recent slump, Brazil has seen breakneck growth in recent years. Its economy surged after 2008 to overtake the UK as the world’s sixth-largest economy. Its popularity among tourists and business travelers remains strong. But sagging infrastructure has not kept pace.

“If I had said 10 years ago that the number of air passengers in airports would increase at a rate of 3 percent a year for the next 10 years, I would be called crazy, mad, a lunatic, out of my mind. And what happens now? It has been increasing at double-digit rates,” says Cunha. “The World Cup and Olympics are very good reasons for these things to be done. There is a deadline to be met. It is then or never.”

From the Suite Spot: When the BRICS crumble