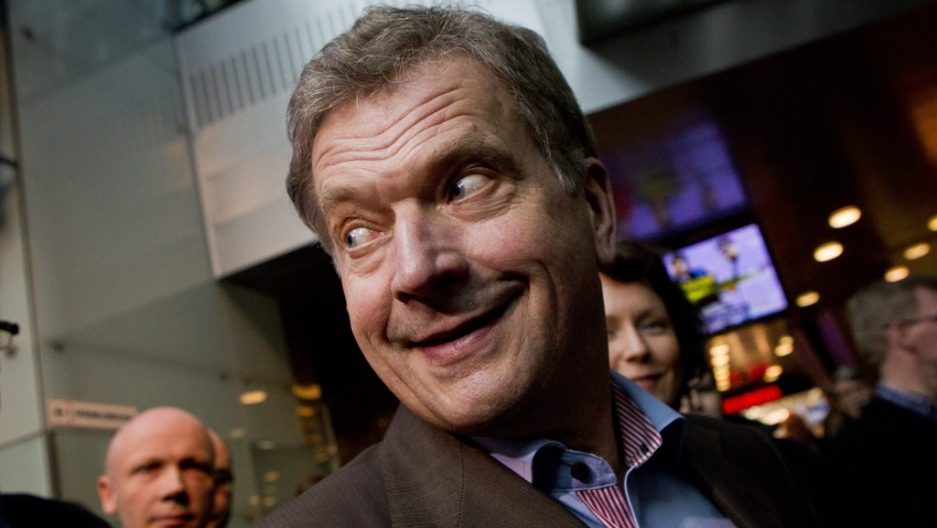 HELSINKI, Finland — When Euro zone ministers agreed on Tuesday to release 30 billion euros ($36.9 billion) by the end of the month to help Spanish banks avoid financial crisis, they had to negotiate resistance from a small but increasingly vocal member.

Finland’s Finance Minister Jutta Urpalainen said his country wouldn’t participate in the loan program, due to be finalized next week, unless it was given collateral. It wasn’t the first time the Finns have threatened to veto a euro crisis bailout — they forced Greece to agree to a collateral deal over its last bailout in February —something that has made their leaders very popular at home.

Their hard-line stance on the euro has given the small Nordic country outsized attention and clout, and they show no signs of easing their resistance.

More from GlobalPost: Euro crisis: Another day, another flirtation with disaster

Finland has found itself in an increasingly rare position inside the euro zone. Unlike Spain or Greece, no heavy austerity measures threaten the lifestyles of its people. And unlike France, Finland is one of only four euro zone countries to maintain a top-level AAA credit rating.

In Helsinki’s market square, elderly women are still willing to pay more than $30 for a kilo of locally-grown cauliflower. Bars are full during happy hour, where free-flowing glasses of beer cost almost $8. Despite the high prices, the quality of life here remains high thanks partly to the country’s universal health care, celebrated education system and low unemployment rate. The only aspect of Finland that seems to be changing is its role in Europe —and that makes Finns happy.

“The euro is the best thing to have ever happened to us,” says Kaari Heikkinen, a 23-year-old nurse in Helsinki. “It feels like Finland matters.”

More from GlobalPost: The coming jobs disaster for Europe

Finland’s ability to pressure larger euro zone countries is remarkable considering its position a mere 20 years ago. The country with a population of only 5.6 million people that long lived under the Soviet Union’s shadow didn’t join the EU until 1995. After struggling through a collapse of the local markka currency in the early 1990s, the Finns — unlike their neighbor Swedes — voted to exchange their fiscal sovereignty for a stronger place at the European table by joining the euro in 2002.

They feel that’s now paying off. “Finnish politicians wanted to be in the same club as the rest of Western Europe,” says Vesa Vihriälä of the Research Institute of the Finnish Economy. “And being part of the euro zone, having the same currency, is more than just being part of the EU.”

In addition to their promise of 30 billion euros for Spanish banks by the end of the month, all 27 European Union finance ministers agreed on Tuesday to extend by one year, to 2014, Spain’s deadline for reining in its budget deficit to 3 percent of GDP. However, they failed to reach a binding agreement over the channels through which the full Spanish bailout of 100 billon euros will be paid, partly because Finland reneged on schemes to which it agreed only last month.

The Finnish government drew the financial world’s ire by saying it would not support using the new permanent European bailout fund — the European Stability Mechanism, or ESM — to purchase bonds on secondary markets, a position the Netherlands also supported. That prompted Spain’s Finance Minister Luis de Guindos to remind the two governments of a get-out clause in the ESM that enables the European Central Bank and European Commission to use rescue funds approved by only an 85 percent majority of members. That would rob Finland and the Netherlands of their veto power.

Finnish President Sauli Niinistö, who was finance minister when his country introduced the euro, has been quick to defend his commitment to the euro zone.

“Finland has shown more solidarity in this crisis than any other country in Europe,” he said in an interview. But he added that the country’s high tax rates meant Finnish households have less money than Southern Europe’s. “So suddenly we’re in a position where the poorer give aid to the richer.”

Niinistö, who this year became Finland’s first conservative head of state since 1956, pointed to recent public opinion polls that found a majority of Finns want to remain in both the EU and the euro zone, and said the Finnish people have been paying disproportionately to do so.

True or not, a large number of Finnish taxpayers back bailout guarantees.

During negotiations over the Greek bailout loan in February, Finland stalled the process by threatening a parliamentary veto if Greece failed to provide collateral on its loan.

Greece agreed to deposit cash in a Finnish state account for buying AAA-rated bonds for raising funds for collateral. Finland will return the money, plus interest, once the loan is repaid.

“It’s a matter of principle,” a Helsinki IT consultant named Jouko Toivola said. “You have to draw the line somewhere.”

The government says it will use its agreement with Greece as a model for talks with Spain.