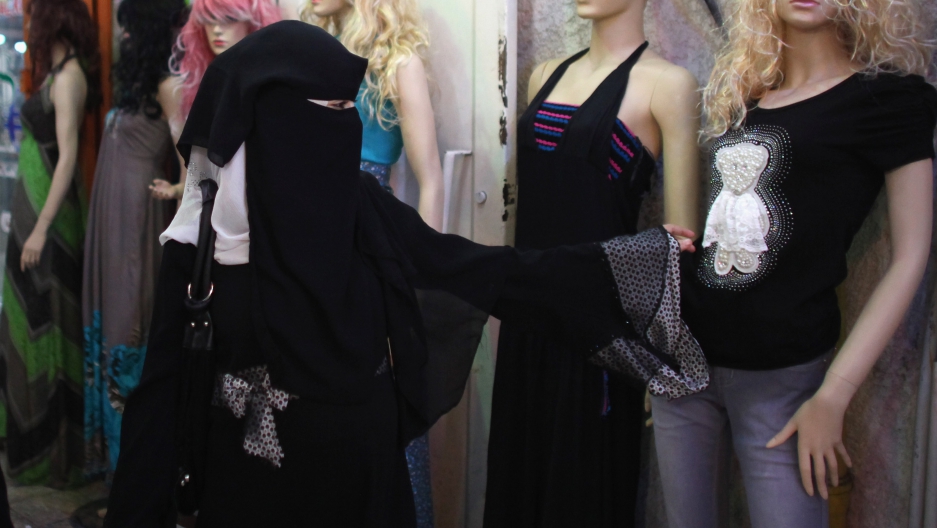 A Palestinian women browse fashionable clothes in a shopping mall in Gaza City, Gaza. Hamas officials appear to be no longer concerned with the appearance of mannequins and other displays in clothing stores.
Credit: Christopher Furlong
Share

GAZA CITY, Gaza — Five years after seizing power in the Gaza Strip, the Hamas movement appears to have entirely backed-off from attempts to impose strict Islamic strictures on life in the coastal territory.

But now, locals say, the Gaza Strip is a much more liberal place.

“The government doesn’t bother me at all any more,” said 35-year-old Said Al Helou, the owner of a women’s underwear and lingerie shop in Gaza City.

The male hairdressers once ordered by the interior ministry to stop styling women’s hair are also back to work.

More from GlobalPost: Are Palestinians giving up?

“At first, a few years ago, the [Hamas] police told me to never display a photograph or mannequin that reveals a woman’s body in the window,” Al Helou said. His window display now features a mannequin clad in a white lace negligee. “But now, they’re not concerned.”

Hamas — an Arabic acronym for the “Islamic Resistance Movement” — calls for, in its charter, the establishment of an Islamic state in what is now both Israel and the Palestinian Territories.

But it is apparently abandoning a formal policy of imposing Islamic law, suggesting that the movement is growing increasingly tolerant, and adapting to its role and responsibilities as a government, some here say.

Hamas assumed power after routing rival Fatah forces in a series of bloody battles on the streets of Gaza in 2007. Following a period of diplomatic and economic isolation, Hamas is now also developing relations with more foreign nations.

“The girls feel more free to wear what they want now, and I believe this is against Islam,” said 28-year-old Abdullah Mohammed, a Gaza City perfume vendor.

“But I don’t think the government should get involved,” he said. “I want people to return to Islam, but it should come from their own personal convictions. Not the law.”

Mohammed was himself stopped by a Hamas policeman in 2009, when he was walking along the beach with his fiancée. He said stories of security forces harassing men and women, demanding to know the nature of their relationship, have all but disappeared.

And while Gaza is largely conservative, and most women wear headscarves, the customs are mostly enforced informally by society and through the family.

More from GlobalPost: Gay Palestinians caught in the middle of the conflict

More than 90 percent of Gaza’s 1.5 million people are Muslims, but the territory is also home to a minority group of Christians and secularists — as well as Muslims whom balk at government interference in personal or religious matters.

In the 1990s, under the secular-minded Fatah, Gaza’s coastline was peppered with bars and belly-dancing joints.

“They [Hamas] are hardliners, but they modified this initial push for Islamic law because of pressure from the masses,” said Eyad Sarraj, a 68-year-old Gazan psychiatrist and consultant to the Palestinian delegation at the 2000 Camp David peace summit.

“They came to these places — to restaurants — and they tried to make women stop smoking [nargileh],” he said. “They made the restaurant owners sign documents to say they wouldn’t serve shisha to women. And this caused a lot of problems.”

Now, there is even a smattering of female workers employed at some of the nargileh-serving cafes on the Gaza City shoreline — something that was unthinkable just a few years ago.

Still, in Gaza’s more conservative bastions — in the southernmost towns of Rafah and Khan Younis, for example — fundamentalist preachers make sporadic appearances on the beach in the summer months, promoting “virtue” and warning youth of the dangers of immodest behavior like smoking and playing cards.

The campaigns are not government-sponsored, but Hamas tends to tolerate the preaching in more conservative areas.

Many here speculate that Hamas made the advances to impose Islamic, or sharia, law in order to prove its Islamist credentials to a small but fierce movement of fundamentalist Salafis in Gaza, some of whom advocate violent struggle.

Taher Al Nounou, a Hamas government spokesman, stressed in an interview with GlobalPost the “moderate” nature of their Islamic governance, and dismissed the fundamentalists as insignificant.

But the feeling among locals now, they say, is that the ruling Hamas government is resigned to letting people live their lives.

Those who brew their own wine and other spirits at home are left unmolested by security forces. And two nights a week at Gaza’s premier five-star hotel, a local deejay plays Arabic pop music for poolside couples smoking and drinking fresh juice.

Alaa Abu Ghesh, the 31-year-old manager of Valencia, a sophisticated restaurant in a new mall locals say is owned by Hamas-linked businessmen, said there is no pressure from the government to segregate male and female customers at the diner.

"It's because Hamas, they realized that they [themselves] are people just like everybody else," said Khalil Abu Shammala, director of the Gaza-based Al Dameer Association for Human Rights.