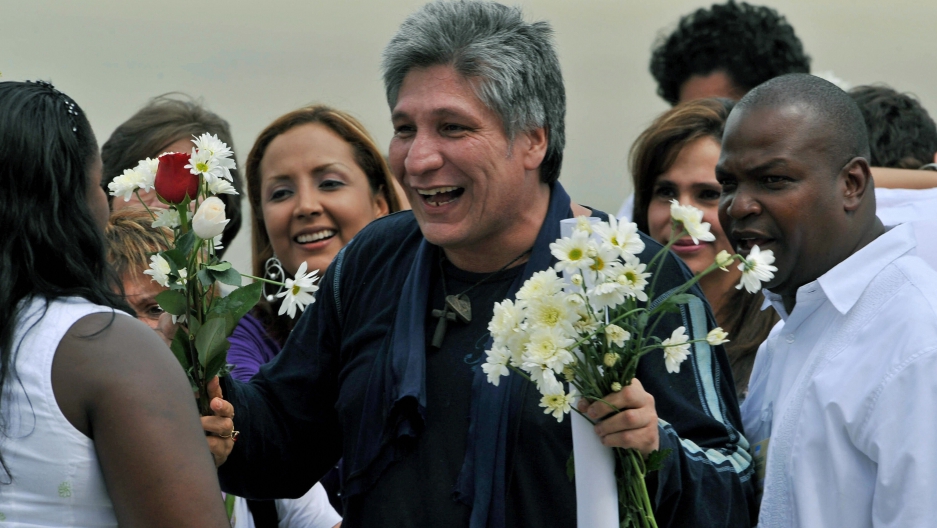 Looking pretty healthy there, for a prisoner, say some of this politician's enemies. Sigifredo Lopez was captured and released by Colombia's FARC guerrillas. But now he's sitting under house arrest, accused of helping to get himself and 11 other politicians kidnapped.
Credit: Luis Robayo
Share

CALI, Colombia — During seven years as a guerrilla hostage Colombian politician Sigifredo Lopez endured forced marches, wretched food, abusive guards who chained him to trees, and the constant threat of execution. Yet even though Lopez was freed in 2009, his nightmare continues.

For starters, he’s no longer free.

Rather than rebel chains, Lopez today wears a plastic ankle bracelet and lives under house arrest in the southern city of Cali. In an incredible twist, Lopez stands accused of helping Marxist guerrillas plan his own kidnapping as part of a mass abduction in 2002 that led to the deaths of 11 of Lopez’s fellow state legislators.

The charges, leveled by government prosecutors in May, have shocked Colombians. A recent cover story on Lopez in the Bogota newsmagazine Semana was headlined: “Judas?”

But the case has also turned the spotlight on Colombia’s defective legal system. Evidence leaked to the media seems to indicate the case against Lopez is full of holes.

What’s more, his alleged participation in the crime defies logic. Why would Lopez take part in a guerrilla conspiracy that would confine him to a jungle prison and separate him from his wife and adolescent sons for seven years? An avid reader, Lopez said he feels like a character in a Franz Kafka tale.

The tragedy began unfolding on April 11, 2002. Guerrillas of the Revolutionary Armed Forces of Colombia, or FARC, who were disguised as army troops, stormed a government building in the heart of downtown Cali, announced a bomb threat, and abducted a dozen state lawmakers, including Lopez.

The rebels tried to swap the politicians for imprisoned guerrillas. But the Colombian government refused, so Lopez and his colleagues languished. Then, on June 28, 2007, 11 of the 12 hostages were executed by the rebels who panicked when they mistakenly thought the army was launching a rescue operation.

More from GlobalPost: Colombia's rebels would kill for peace

On the day of the massacre, Lopez said he had insulted the guerrillas and was separated from the other prisoners as punishment. He later learned that his guard was washing dishes in a river and never heard the order to execute the hostages. By the time the guard returned, Lopez said, the FARC had realized its mistake.

“If the death of one person can break your heart, imagine the pain of having 11 brothers die,” Lopez wrote in his memoirs. “I cried and cried and cried. I cried 11 rivers.”

The FARC finally freed Lopez in 2009. When a Red Cross helicopter delivered him to the Cali airport, his two grown sons were so excited that they nearly knocked their father to the tarmac as they embraced him. But for relatives of the slain hostages, the moment was bittersweet.

“I thank god that he brought Sigifredo back,” said Fabiola Perdomo, whose hostage-husband was killed in the massacre. “But it was also painful. I had long dreamed of embracing my husband the way Sigifredo hugged his family.”

As she walked through a Cali plaza adorned with 11 plaques commemorating the state legislators, Perdomo said she is convinced Lopez had nothing to do with the kidnapping. But his improbable survival fed rumors that Lopez was in cahoots with the FARC.

More from GlobalPost: Americans stick up for Latin American workers

His critics point out that as a university student Lopez briefly joined a left-wing political party. In the early 1990s, Lopez served as mayor of Pradera, a town located in a FARC stronghold where politicians were often forced to collaborate with the rebels.

Fueling the speculation was Lopez’s physical appearance upon his release. While his fellow hostages appeared emaciated in proof-of-life videos recorded before the massacre, Lopez looked robust.

“He came out of the jungle very fat, not like my brother who was gaunt and losing his teeth,” said Julian Hoyos, whose brother Jairo Hoyos was executed by the FARC. “I don’t believe anything this man says.”

A key piece of evidence in the case is a 40-minute video recovered from a rebel computer following a raid last November that killed Alfonso Cano, the FARC’s maximum leader. In the video, a man provides details of the layout and security of the state legislative building in Cali shortly before the FARC abducted the lawmakers.

Government prosecutors claim that the voice of the man on the video is identical to the voice of Lopez. The man's head appears on camera for a brief moment and investigators say the shape of his jaw and nose match Lopez.

“The raid was very well planned so there had to be people on the inside who gave information to the FARC,” said Carlos Orozco, who was recently elected to the state legislature and occupies the former office of his lawmaker brother who was one of the 11 slain hostages.

“Sigifredo,” he added, “is the only one who knows the truth.”

However, a voice comparison test conducted last month by the FBI at Lopez’s request concluded that his voice did not match the voice on the FARC videotape. “The most important piece of evidence that prosecutors had against Sigifredo has collapsed,” said Alfredo Montenegro, Lopez’s lead defense attorney.

Lopez has often pointed out that if he were involved he could have stayed home on the day of the FARC raid. Even if he had agreed to be kidnapped to make the crime look more authentic, the FARC could have released him much earlier or arranged for his "escape."

Emails recovered from captured FARC computers also seem to back up Lopez’s version of events. Rather than a mole, they refer to Lopez as just another prisoner. One message, written by FARC commander Cano shortly after the massacre of the hostages states: "One legislator survived. He was being punished and was in another area. He didn't see anything but he did hear [the shots]."

Then there is Lopez’s wrenching book about his years in FARC captivity. He refers to his captors as “cretins,” “idiots,” and “animals.” Anecdotes of extreme cruelty by the FARC are interlaced with love poems Lopez wrote for his wife.

“I don’t believe Lopez could be so cold as to abandon his family for seven years,” said Olga Lucia Gomez, a psychologist who heads the Foundation for a Free Country, which counsels the relatives of hostages. “I witnessed how his wife and kids suffered.”

"This is a big lesson in the fragility of the Colombian justice system," said John Jairo Hoyos, whose father was killed in the massacre. "I would be afraid to fall into the hands of these people."

Given the surreal turn of events that has put Lopez back in captivity, Perdomo now believes that if her husband had survived the massacre, he might find himself in the same legal limbo.

“It’s scary how fast a victim can be recast as a perpetrator,” she said.