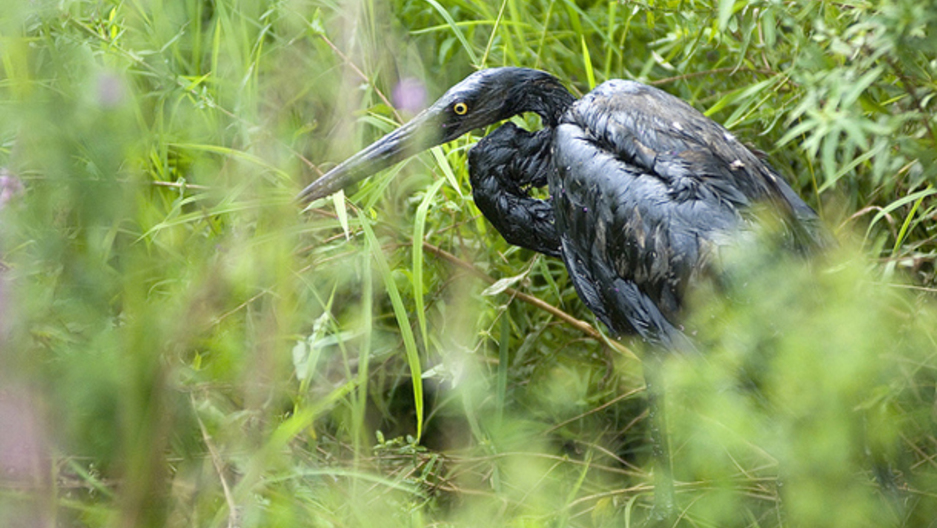 This great blue heron was covered in oil from the oil spill in the Kalamazoo River in Michigan in 2010. (Photo courtesy of the Michigan DNR.)

Two years ago, just months after the Deepwater Horizon disaster in the Gulf of Mexico was finally over, another oil spill hit the United States, this one in Michigan.

While it wasn't as well-known, when a large oil pipeline carrying oil from the tar sands of Canada to Michigan ruptured, it sent nearly a million gallons of crude into the Kalamazoo River and triggered a series of events that would ultimately lead to one of the largest fines ever for an oil spill.

The spill occurred near the community of Marshall, Mich., in the southwestern part of the state, said Lisa Song a reporter from Inside Climate News who investigated the Kalamazoo disaster.

"About 6 p.m. on the 25th of July, the company, which is called Enbridge, they had a control room in Alberta that was monitoring everything going on with the pipeline," Song said. "And they had started to take the pipeline offline for some routine work when an alarm went off in the control room."

The 6B pipeline, which is buried in wetlands near the Kalamazoo River, had sprung a leak. But back at the control room, with more alarms going off, operators presumed it was merely an air bubble in the pipe, causing pressure to rise and fall.

It wasn't until 11 a.m. the next day, Song said, that a local utility employee saw oil in a creek and called Enbridge, alerting them to the unfolding disaster.

That slow response is just part of the reason the Federal Environmental Protection Agency handed down a $3.7 million fine, citing 22 probable violations of environmental laws and regulations, many stemming from the action — or inaction — in the control room that evening and into the next morning

Fortunately for the environment, for many of those hours, the pipeline was offline, so only small amounts of oil were leaking out. But on the morning of July 26, the pipeline was restarted, and for several hours it gushed — even as alarms were going off at the control room, Song said.

" It was not the kind of oil that the EPA or the Coast Guard or any cleanup crews had experience with. It was diluted bitumen, which is different," Song said.

It's more like tar than the oil we typically think of.

"The EPA went into the spill thinking it was a conventional crude oil spill. They thought everything was normal, and when this diluted bitumen spilled, it at first floated on the water," Song said. "Over a period of days, the light hydrocarbons started evaporating. And after they evaporated, all you have left is the heavy bitumen, and that’s what sank into the river."

In fact, the EPA worked on clean-up until late August without finding out what they were dealing with, Song said.

"Some clean up workers, walking through the river in their hip waders, noticed that whenever they stepped into the river, these flakes of oil would float up from the bottom and create this oil sheen," she said.

Song said the company never told the EPA this wasn't everyday crude oil. EPA officials told reporters this spill was unlike any spill they'd ever seen.

"It basically made the cleanup much more difficult and expensive," Song said. "So the EPA went in thinking, 'we’ll have this cleaned up in two months.' Now it’s two year later and they’re still cleaning it up."

Clean-up crews had to come up with new techniques for cleaning submerged oil. One method is to dredge the river, but that would have caused its own damage to the ecosystem.

"They had to improvise more gentle ways of cleaning up the submerged oil without destroying the river they were trying to save," Song said.

The oil in this pipeline is the same sort of oil that would be carried by the Keystone XL pipeline, should it be built through the central United States. The results of a spill have been one of the questions raised in places like Nebraska and South Dakota.

But Song says we still don't know how a spill would affect groundwater, rather than surface water.

But the Michigan spill was certainly expensive, with its clean-up costing some $765 million. So far.

A chunk of the Kalamazoo River still remains contaminated and the EPA says it may take months or perhaps even years to complete all the clean-up.