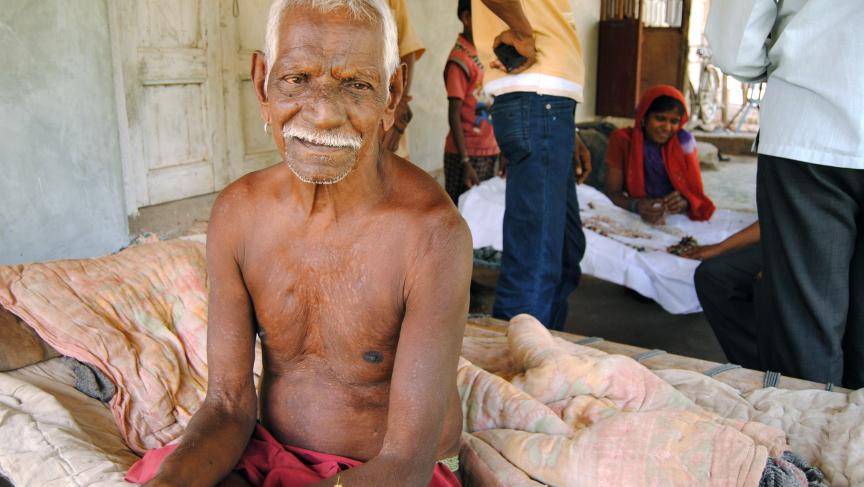 Latu Rutia is one of about about a million Rathwee speakers left in India, where nearly 200 languages are endangered. (Photo by Hadley Robinson.)

Latu Rutia rises from a cot on the back porch of his house in Chhota Udaipur, a small town in western India that many members of the Rathwa tribe call home.

Rutia, an 80-year-old member of the tribe, wears only a loincloth and earring. He speaks in his native language of Ratwee. Rutia says in the schools his grandchildren attend they are taught in the state language, Gujarati.

"They are forced to speak differently," he said.

Rutia worries that elements of the Rathwee language are fading, even though it's believed to have nearly a million speakers. But the number of speakers may be less important than how and where the language is spoken.

That's where the People's Linguistic Survey of India comes in. It has field workers spread across the country documenting Rathwee and hundreds of other Indian languages.

Researchers are documenting each language's characteristics and recording its folk stories and songs. They also note how the languages describe time and color. For example, the Rathwee language labels various stages of dawn: when the cock crows is one part and when the birds start moving is another.

Ganesh Devy, who created the survey, says embedded in each language are unique ways of seeing the world.

"Some languages in India do not have terms for the color blue," he said. "I ask them how they look at the sky. So they said they do not think of a blue sky … they think of the sky as so sacred that no adjective (can) be attached to it."

Of the roughly 900 languages spoken across India, many are closely related. But others vary wildly, especially when it comes to concepts like color.

Andrew Garrett, linguistics professor at the University of California, says it's these singular ways of describing things that are the first to go when a language like Rathwee assimilates into dominant languages. That's one reason documentation can help.

"If your government is interested in supporting small languages, then it's helpful for them to know that the language of your village is really quite different from the language of the other villages nearby," Garrett said. "They might actually put some effort into doing what's needed in education or in language documentation."

UNESCO has listed nearly 200 Indian languages as endangered. Some regions of India are experimenting with mother tongue-based education, which allows students to learn in the same language that they speak at home.

Many studies show that mother tongue-based education increases childrens' learning and decreases dropout levels. It's something the Indian linguists support. Andrew Garrett says it can help slow the death of languages.

"In the face of thousands of endangered languages, not all of them are going to still be used in a hundred years," he said. "Many of them won't be. But I think some efforts will be successful."

Earlier this year, the Indian linguists started handing over their findings to the Indian government. Devy says the government response was encouraging. He is hopeful it will introduce a program supporting mother tongue-based education.

The next challenge is to convince people that their language doesn't have to hold them back.

To Devy, the Rathwa people living in rural Gujarat are just as modern as those racing to business meetings in downtown Mumbai. Just because they speak an ancient tongue and live far from the city doesn't mean they should be excluded from proper schooling and progress.

Now that Devy and his colleagues have gathered details of all the known languages of India, they're hoping for swift government action so school teachers will once again instruct students in their own language.