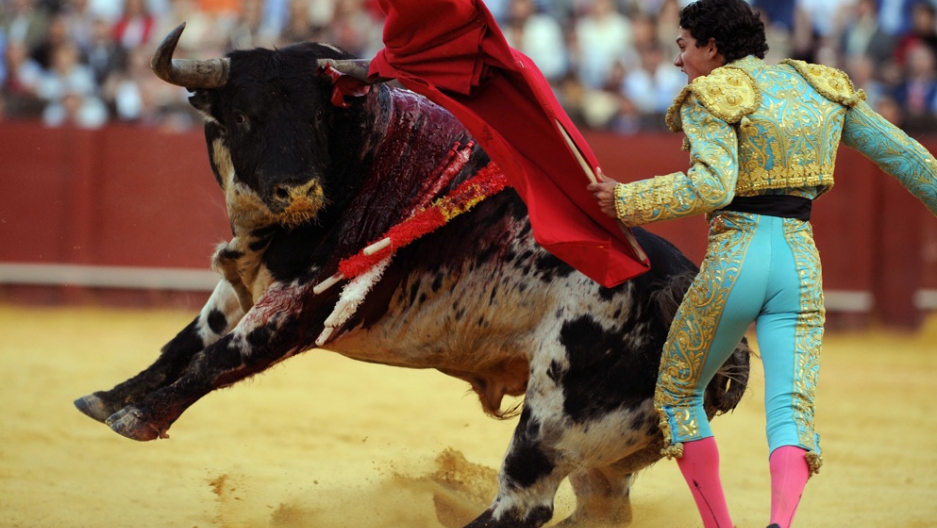 Spanish matador Oliva Soto during a bullfight in the Maestranza Bullring in Sevilla on May 22, 2008.
Credit: Cristina Quicler
Share

For those with the stomach to watch it unfold, Europe's debt crisis has assumed a sickeningly familiar pattern.

That scenario played out yet again today as 10-year yields on both Spanish and Italian bonds rose to dangerously high levels. Meanwhile, European finance ministers prepared to meet again to discuss the latest problems.

“It’s very concerning,” Jeff Savage, regional chief investment officer for Wells Fargo Private Bank in Portland, Oregon, told Bloomberg. “Seven percent is not a sustainable level of interest rates for Spain. That’s scary stuff. We can’t have one of our best trading partners going through terrible economic times and not have an effect on US corporate earnings.”

The problem this time?

It's the Finns, who last week warned that buying bonds to support Europe's bailout mechanism might not be such a good idea.

That wobble isn't going down well with European leaders who demand bolder action.

In a statement released Monday Guy Verhofstadt — head of the Liberal and Democrat group in the European Parliament and a former prime minister of Belgium — offered this dire warning, printed here in the New York Times:

“The clock is counting down to midnight for a permanent solution to the debt crisis. Unless everyone now backs wholeheartedly the plan outlined and endorsed at the last summit, there will not be a euro zone left to defend.”

For more on how Europe's debt crisis is affecting one particularly troubled corner of Spain, see this great GlobalPost piece today by Meritxell Mir in Langreo, where some 10,000 miners have been on strike since late May in protest of government budget cuts.

"For more than 40 days, 14 men in the north of Spain have spent their days and nights in dark shafts, 3,000 feet underground. They are not trapped. Instead, these miners have voluntarily locked themselves in the depth of the mines to protest against the massive government cuts to the sector."