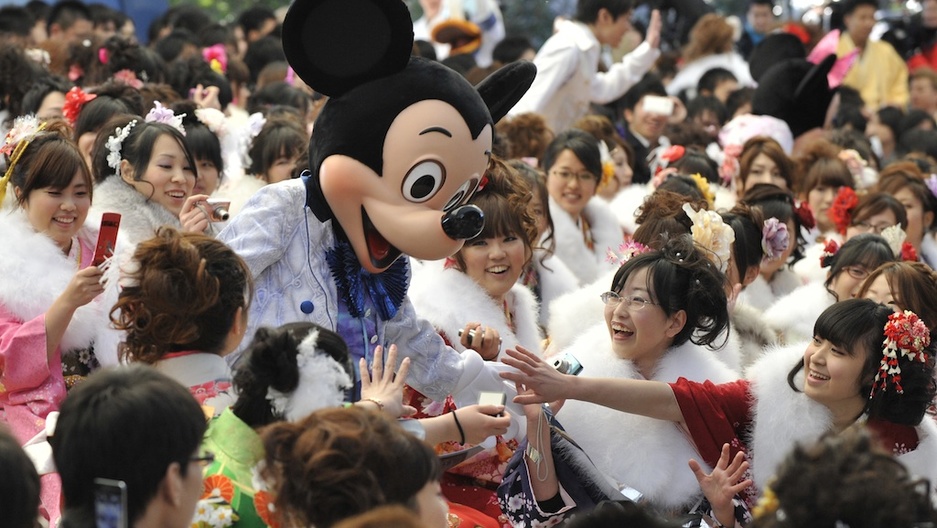 Mickey Mouse and a host of other Disney characters made their North Korean debut in a Friday concert for new leader Kim Jong Un.

Mickey was joined by his beau Minnie Mouse, Winnie the Pooh, Tigger, and other famous animated characters, who performed for North Korea's leader and citizens while "Snow White," "Dumbo," "Beauty and the Beast" and other Disney movies played on a backdrop behind them, the Associated Press reported.

Friday's show appeared to be the first time that Disney characters have been featured in a North Korean performance, according to the Guardian.

"The inclusion of characters popular in the West – particularly from the United States, North Korea's wartime enemy – is a notable change in direction for performances in Pyongyang," the Telegraph pointed out.

The Moranbong band, which was assembled by Kim, organized the performance, according to state-run Korean Central News Agency (KCNA).

According to KCNA, Kim Jong-un has a "grandiose plan to bring about a dramatic turn in the field of literature and arts this year," the Guardian reported.

Kim Jong Un, who is in his 20s, took power after his father Kim Jong Il passed away in December, and has aimed to project a youthful, modern presence as the country's new leader, the AP reported.

Koh Yu-hwan, a North Korean studies professor based in Seoul, South Korea, told the Guardian that the allowance of Disney characters — who are already wildly popular in North Korea — may be a sign that that Kim is working on putting forth a different image than his father and grandfather by loosening restrictions on Western culture.

More from GlobalPost: Onward To the Final Victory: Kim Jong Un gets his own theme tune (VIDEO)

North Korea and the United States are in a technical state of war because they signed a truce in 1953 after three years of war, and not a peace treaty, the AP reported.

The two countries do not have diplomatic relations.