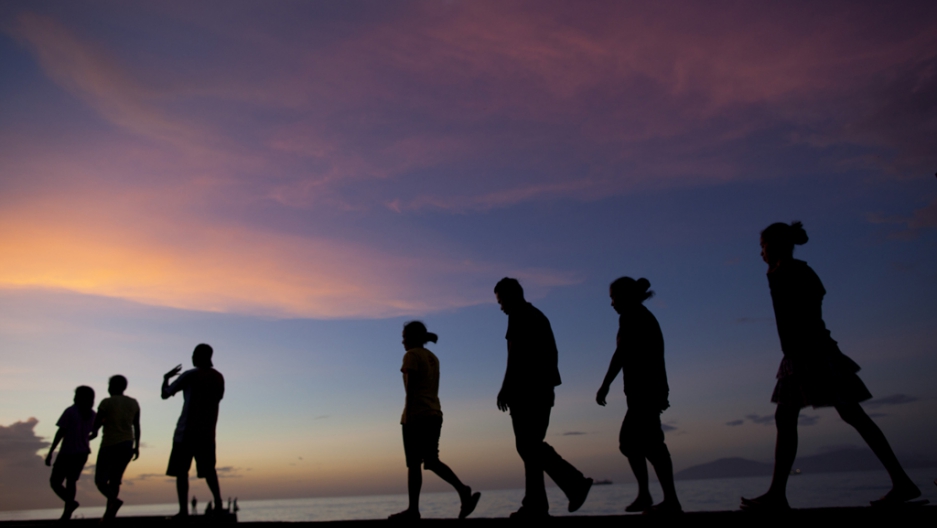 DILI, East Timor, and Jakarta, Indonesia — Not until she was at the deathbed of the man presumed to be her father did Alexhia Cordova da Silva’s life start to make sense.

Raised by an elite political family in Jakarta, da Silva had endured years of hushed rumors about her dark, Melanesian features at social events. On the street, “slumdog” and “monkey” were regular taunts.

And then in his last breaths, her father revealed the secret: She was East Timorese, snatched away from her mother and father when she was only 24 days old.

From 1975 to 1999, Indonesia fought a brutal war to suppress East Timor’s independence movement and control the former Portuguese colony. A reported 183,000 died from fighting, starvation and disease during the war and human rights abuses were widespread.

But this had little relevance to da Silva until her family bombshell hit. And at 19, she reacted as any angry and emboldened teenager might. She ran away from home, left her law degree and Islam in the dust and made contact with the East Timorese Prime Minister Xanana Gusmão via Facebook. He became personally involved in locating her family.

“It was like an electric shock,” says da Silva of first meeting her mother. “She told me she always knew I would come home.”

With family connections in the banned independence group Fretilin, da Silva’s illiterate parents say they feared for their lives if they didn’t sign a document handing over custody of their daughter.

“They were under pressure,” she tells me in a café near her Jakarta university, “My mother said to me, ‘I knew you’re were going to be a smart girl so I wanted you to have a good future, that’s why I gave you to someone rich.’ And OK, I can accept that.”

Educated abroad and blessed with political connections that, somewhat ironically, led her back to her East Timorese family — da Silva is one of the lucky ones.

Some 4,000 children were transferred from East Timor during the 24-year occupation. Many of the Indonesian soldiers, civil servants and religious organizations that took in the children were motivated by altruism, genuinely wanting to help. But some were treated as pseudo-slaves, raised by soldiers who had murdered their parents. Others were confronted with the unfamiliarity of strict Islamic boarding schools.

Many of the children sent to Islamic boarding schools in Indonesia were very young and from poor and remote parts of the country. In many cases, their parents were coerced into handing them over on the promise they would receive a good education.

More from GlobalPost: East Timor is changing, but not fast enough

Sjamsul Bahari's mother permitted him to be sent to an Islamic boarding school in Bandung, West Java, in 1998. Nine years old at the time, Bahari was able to remember his mother and send her annual letters, but many others were too young.

“Lots of the children were only 2 or 3 years old, so they found it difficult to tell who they were,” he explains during a tense interview overseen by two East Timorese Islamic leaders at Dili’s An Nur Mosque.

Getting an Islamic organization to acknowledge that children were contentiously removed from their parents, forced to convert to Islam, and then shipped off to Indonesia is an undeniably fraught exercise. The issue is even more sensitive because East Timor is predominately Catholic.

But Bahari admits that in Indonesia, many of the East Timorese were stressed and unhappy. In the mid-1990s, he wrote to the organization that had sent them, the Nasrullah Islamic Welfare Foundation (Yakin) in Dili, for help. They never replied. No one helped and no one was ever responsible for the ones that ran away.

“That is the tragedy of it. In a lot of cases [the children] just disappeared and nobody knows where they are,” writes Helene Van Klinken in her recently published book, "Making Them Indonesian: Child Transfers out of East Timor," which offers the first comprehensive account of East Timor’s so-called "stolen children."

A secret military document suggested that soldiers should help promote the transfer of children in order to spread Islam in East Timor and that such “suggestions” were difficult for parents to deny. Dr Klinken also notes that the transfers were “conducted in a low-key, almost secretive manner” and almost certainly would have raised eyebrows if the children transferred were from wealthy and influential families.

Besides the one secret military document, the removals were arbitrary and never state policy, although it was former Indonesian dictator Suharto that started it. A year after Indonesia had invaded, 23 Timorese children were taken to meet the president and his wife at their private residence in Jakarta.

“The children became, on behalf of the East Timorese, putative members of his [Suharto’s] family and by extension of the Indonesian family,” explains Klinken.

The East Timorese rejected Indonesia’s annexation, which was never recognized by the UN, but was supported by the US ostensibly to keep a key submarine passageway out of Soviet control.

Klinken suggests the resistance to Indonesian occupation may have inspired Suharto’s unofficial hearts and minds campaign.

The children sent to Islamic boarding schools were expected to return to East Timor and spread the Islamic faith. Others were raised with the expectation they would later promote East Timor’s integration with Indonesia.

Such motives echo the forced removal of Aboriginal children in Australia and babies during Argentina’s dirty war, observes Klinken.

“Young children were the target of these transfer projects as they are impressionable and easily manipulated to serve political, racial, ideological and religious aims of the power holders to civilize and assimilate, incorporate and dominate, as well as to weaken the group to which the children belonged,” she writes.

To be fair, da Silva admits she would possibly be dead or “married and pregnant” rather than foreign-educated and trilingual if she hadn’t been raised in Indonesia. Still, that doesn’t seem to make it less disorienting.

“I like Indonesia, but I don’t really love it. I think that’s because I am not really Indonesian, I just have my life here,” she says unsteadily.

The 19-year-old hasn’t spoken to her Indonesian mother since she ran away from home late last year, and she doesn’t exactly fit in with her dirt-poor East Timorese family either.

Her parents and more than 10 siblings live in a remote village six hours drive from Dili, a world away from Jakarta’s mega malls and traffic jams. On top of that, da Silva can’t even converse directly with her father. He only speaks Tetum and Portuguese, not Bahasa Indonesian.

It’s a dislocating experience that human rights advocate Vitor da Costa knows well. When he returned to East Timor in his mid-20s, his grandmother cried at first sight of him, but they could only understand each other after they found a translator.

Before meeting his extended family (both his parents had died) he couldn’t return to the village until they had performed an animist ritual to revive him. Believing he was dead they had already built him a tomb and carried out the funeral rites.

“Somehow I could feel that they were my family,” says da Costa slowly, “although now I have to learn how to be an East Timorese again.”

These days he works with a Jakarta NGO that helps to reconnect separated family members from his homeland.

The cases of child transfers are just one example of the rights abuses that scar East Timor’s past. During the occupation, crimes against humanity and rape were widespread, and between 100,000 and 200,000 East Timorese were killed.

But almost no one has been held accountable. The country’s reconciliation process is widely perceived as a sham, purely diplomatic exercise. With the exception of a few high-profile cases, it is unsurprising then that little has been done to help transferred children find their Timorese families.

The case of East Timor shows that compromising justice for stability has become a political and economic trade-off. In a country of more than 1 million, where 41 percent live below the poverty line and the majority survives off subsistence farming, East Timor’s leaders have repeatedly espoused arguments in favor of development over due process.

That development, along with the security of the impoverished and underdeveloped nation, is premised almost entirely on a stable relationship with Indonesia – its largest trading partner and giant land-linked neighbor.

Yet the reality is that holding rights abusers to account would mean very little to people like Bahari. Nor to the mothers that seek him out at the Dili mosque with photos of their lost children.

For da Silva, meeting her family has been justice enough. Now 21, she hopes others will be able to have a similar experience.

“Even if it is just for one hug, one kiss; one look in the eye.”