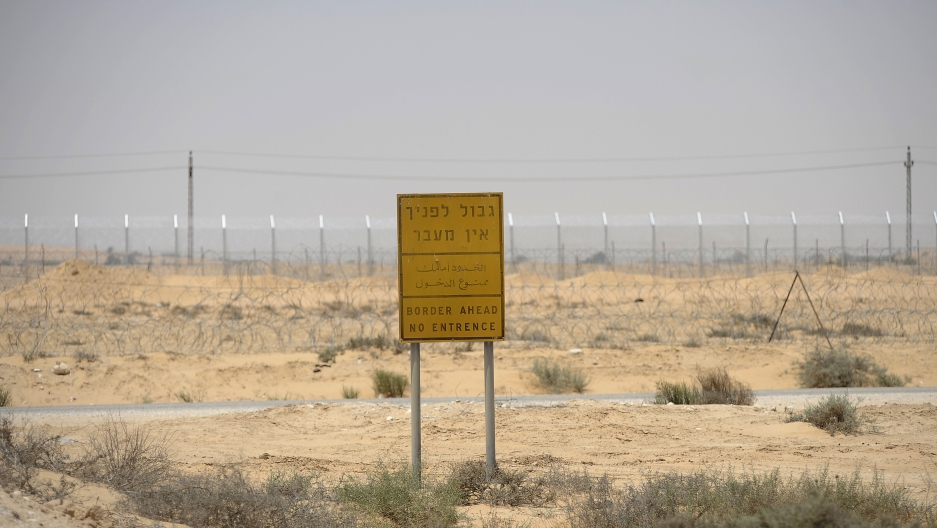 An Israeli sign is seen on the border with Egypt near the Israeli village of Beer Milka on June 18, 2012.
Credit: DAVID BUIMOVITCH
Share

Israel is reportedly building a tent-city detention center in the desert as it steps up efforts to round up and repatriate illegal African immigrants.

According to the Wall Street Journal, Israel is building a fence along its border with Egypt with detention facilities nearby.

"Maybe I sound like a racist, or unenlightened, hateful of foreigners," the paper quoted Israeli Interior Minister Eli Yishai, who has been the most vocal advocate of deporting the Africans, as saying in a post on his Facebook page.

"This is not a campaign against the infiltrators, but rather a campaign to preserve the identity of the Jewish Zionist state."

Those detained were given the option of accepting about $1,250 each and repatriation via plane, or else face incarceration and forced deportation.

However, according to the WSJ the South Sudanese make up a fraction of an estimated 60,000 Africans who have crossed illegally into Israel in recent years, mainly owing to lax Egyptian border controls.

The Africans' growing presence has stoked tensions in major cities, notably Tel Aviv and Jerusalem, where a 68-year-old Eritrean man was severely beaten by drunken youths on Friday, according to the Times of Israel.

And last month in the capital, arsonists set fire to an apartment housing African migrants; four occupants were treated for smoke inhalation.

African migrants, meantime, have recently been accused in several incidents of theft and rape, according to the WSJ.

"It's not safe for a black person to walk around in some areas," the paper quoted Yohannes Bayu, director of the African Refugee Development Center in Tel Aviv, as saying.

The instructions were issued at Tel Aviv’s Ichilov Hospital, citing the threat of infectious diseases.

However, the ministry may still introduce procedures for testing migrants and refugees for diseases at Israeli hospitals based on a patient's status in Israel.

Migrants without status may soon be required to undergo X-ray screening for tuberculosis and blood tests for measles and chicken pox before being treated.

More from GlobalPost: Inside Somalia: Life in Hell