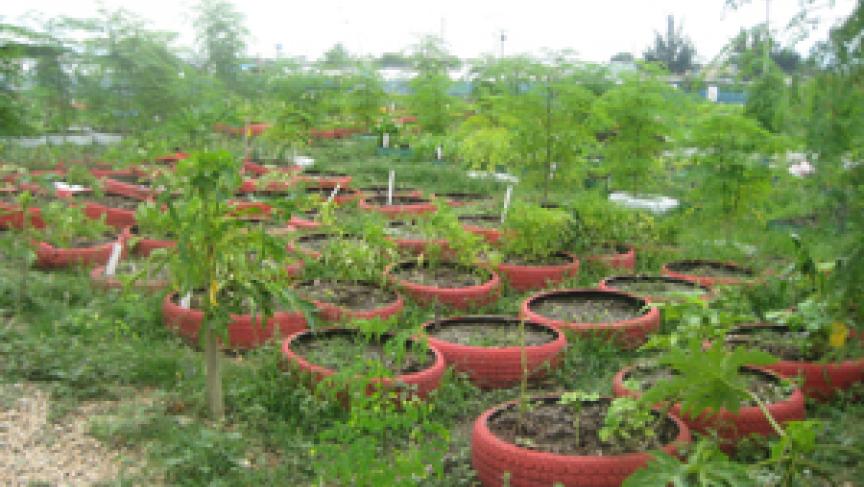 The children of an impoverished neighborhood in Haiti have used the tires that are normally burned during street protests and turned them into containers for spinach, tomatoes and green onions. (Photo: Dave Iverson)

Share
Haiti is unlike any place I've ever been. The list of what it's endured reads like a biblical tale: slavery, dictatorship, corruption, hurricanes, poverty, cholera, and of course the horrific earthquake of 2010. And yet that list doesn't fully define Haiti. Somehow, it's the worst place I've ever been but also the most wondrous, a place that against all odds exhibits remarkable strength and endurance, qualities that I observed when I was there two years ago to cover the aftermath of the quake for the PBS NewsHour. This spring I was back in Haiti and while I was there I met up again with Daniel Tillias, the man who was the interpreter on my reporting trip two years before. One afternoon, Daniel drove a few colleagues and me around the city of Port-au-Prince. What I saw was striking, both for what hadn't changed and for what perhaps still can. The earthquake's impact shifts block by block in Port-au-Prince. You travel down one street and it looks like things are getting better. You round the corner and it's 2010 all over again. "This is the main boulevard in Port-au-Prince," Daniel notes as we drive past a building that look like the earthquake just happened. "I always say the same thing before I go by. I hope I have time to pass by before it collapses." A few blocks from downtown, the familiar tilted outline of the ruined national palace comes into view, unchanged. It's almost as if it's being preserved, like the memorial dome in Hiroshima. But the ruins are actually testimony to something else. I ask Daniel why the palace hasn't been torn down and his response is revealing. "There's been a lot of discussion about who will rebuild it," Daniel observes. "Is it like the United States, France or another one? Or does it have to be Haiti? And the whole debate slows down the process of pulling it down." If there's one constant in Haiti it's that nothing is ever easy. And then Daniel suggests a new destination, the place he grew up: a Port-au-Prince neighborhood called Cité Soleil that was devastated long before the quake. We approach the neighborhood on a deeply rutted muddy road that's made barely passable by the recent rains. Some of the children along the road are half clothed at best. We pass along by what seems like a sea of ramshackle shelters and tents. About 250,000 people live in Cité Soleil. It's the poorest place in the poorest country in the western hemisphere. People shout at us, friendly shouts, as we drive by. Everyone here seems to know Daniel because even though he's created a new life for himself away from Cité Soleil, he's never really left. Besides his work as an interpreter, Daniel is a program director for Pax Christi, a catholic social justice organization. And it turns out there's something in Cité Soleil he wants to show us. "For years people only saw children in Cité Soleil as the enemy of society" Daniel observes. "They think they cannot do anything good in the life." To combat that, Pax Christi, or Sakala as it's called here, started the Inyon Sports Club. Daniel asks an older woman to open a large gate and inside we discover a soccer field, a few classroom buildings and something Daniel calls the wall of dreams. "We wanted to go and ask every kid in the soccer program," Daniel says, "what would you like to do for the future?" The answers are written on the wall. We walk over and Daniel translates some of the children's stories we find there. There is Chadique Careen who writes that she wants to be a nurse by the year 2020. And there's Alexis Jouvenir who says he wants to be an agronomist by 2017. Working in agriculture seems like an unlikely pursuit for a kid in Cité Soleil, but Daniel has something else he wants to show us. We walk through another gate and discover what seems like an impossible site. Here in one of the most impoverished places on earth, a sudden abundance of green, rows of peppers, spinach, tomatoes and some non-traditional container gardening. Daniel and the kids have used the tires that are normally burned during street protests and turned them into containers for spinach, tomatoes and green onions. But the prize of Daniel's garden is a row of moringa trees. Daniel explains that the moringa tree is known as the "miracle tree" in some parts of Africa because every part of it is useful. "You can actually eat the leaves in salad," he tells us, "The branches are good. The roots are good for tea." The garden, Daniel says, is a place where kids can learn about the wonders of the moringa tree, eat healthier and make a little money by selling produce at the market. Back out on the soccer field, Daniel is surrounded by kids. He keeps up a steady patter on the importance of school. They mostly listen, but at one point one of them is clearly teasing Daniel, giving him a hard time which causes Daniel to burst out laughing. "I'm telling him about school being more important than sport," Daniel tell me when I ask him what the laughter was about, "and he tells me that both are important and by the way he doesn't have any shoes for practice so maybe I ought to worry about that!" In Cité Soleil, thousands of kids don't have the shoes for a shot on goal. Daniel Tillias is just trying to make sure a handful of them get a shot at something more. "And that's all they need," he says, just "a chance." A chance, yes. The odds against them are gargantuan, but two former team members are now attending university and like those leaves and branches of the moringa tree, Daniel Tillias and Inyon Sports Club at least represent possibility. And in Cité Soleil, as in all of Haiti, possibility is always worth nourishing.