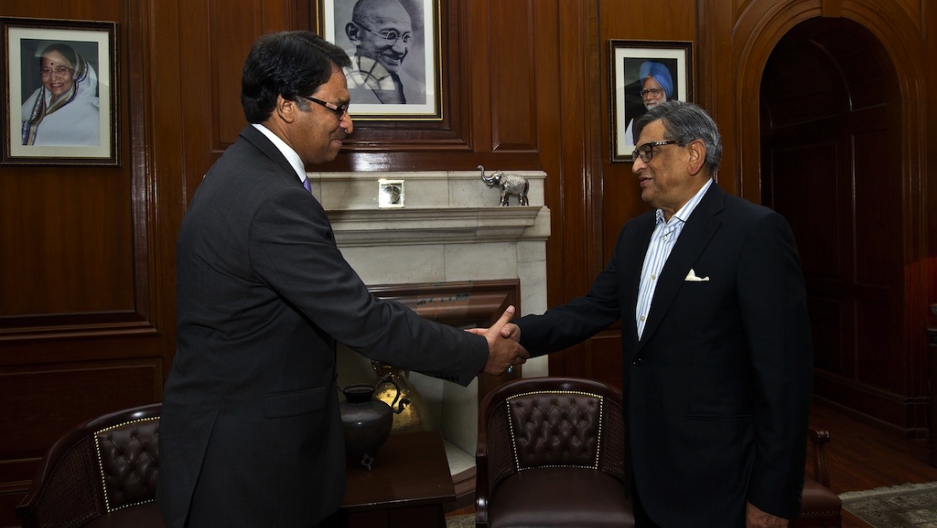 India's insistence on trotting out alleged proof that Pakistan's intelligence forces may have been directly involved in the November 2008 terrorist attacks on Mumbai seems pointless, since it only prompts irritating, boilerplate denials.

As the Associated Press puts it:

India said Thursday that Pakistan should prosecute the architects of the 2008 Mumbai attacks to build confidence in the countries’ peace efforts, while Pakistan said it would fight terrorism but denied that its intelligence agents were involved in the bloodshed.

The two-day talks reflected the chasm that exists between the nuclear-armed neighbors over how to tackle terrorism.

But the mounting evidence, combined with Pakistan's missteps in dealing with Washington, may be slowly giving India the upper hand in negotiations.

The Pakistan government is clearly on the backfoot, says a staff edit in Friday's Hindustan Times. Its relationship with the United States is in a parlous state and even its most faithful backers, Saudi Arabia and China, are reaching the limits of their support.

The Pakistan economy is in tatters and Islamabad seems to have expected the US to bail it out of economic problems, something that the US Congress will not do.

What does that mean for negotiations? Of course Islamabad remains unwilling or incapable of jailing alleged terrorist Hafiz Saeed or identifying and drubbing out the Inter-Services Intelligence (ISI) agents that captured terror suspect Abu Jundal / Syed Zabiudin Ansari has claimed were running the Mumbai attacks from Karachi. But it has forced Islamabad to cede its long held position that the dispute over Kashmir must be settled before any progress can be made on other fronts, writes the HT.

In this weakened state, Islamabad has already taken trade out of the set of policies which it tied to a settlement in Kashmir. Pakistan is now even asking for Sir Creek and Siachen Glacier agreements independent of the Kashmir issue. India should not expect full-scale surrender by Pakistan on all issues. In fact, Pakistan is so lacking in internal political cohesion, with almost every arm of the government in conflict with the other, that this would be an impossible exercise. However, India can and should extract a price on 26/11 — especially given the widespread belief in Pakistan’s ruling class that it would never have to pay a price for the terror strike.

Interestingly, the HT's position is in line with the assessment of Najam Sethi, editor of Pakistan's Friday Times and a trenchant critic of Pakistan's so-called "deep state."

Sethi argues that Islamabad miscalculated in sparring with the US over drone strikes. And in gambling that the US would cave rather than lose hundreds of millions of dollars by shifting to the northern supply route into Afghanistan, Pakistan has sent its own economy spiraling and lost Washington once and for all to New Delhi.

We thought we had the US over a barrel because the Northern Network was unfeasible. In the event, the US spent $1 billion dollars to resist our pressure. We thought boycotting the Bonn and Chicago moots would compel NATA to listen to us. But the US went ahead anyway, formulating its end-game strategy for Afghanistan without input from us, Sethi writes.

We thought we could hang on without CSF, Kerry Lugar aid and the IMF. But we couldn't. The rupee has lost nearly 10 % of its value, the budget is broke and domestic debt has soared.

We also miscalculated the intensity of counter pressure by the US. First, President Obama ratcheted up pressure in the US Congress to stop economic and military aid to Pakistan pending restoration of NATO supply lines. Second, the US Congress raised the spectre of declaring Pakistan a state sponsor of terrorism by threatening to label the Haqqani network and the Lashkar-e-Tayba as global terrorist organisations, the implication being that economic and military sanctions would follow under international law. Third, Washington persuaded Riyadh to hand over Abu Jindal, the LeT activist who organized and orchestrated the Mumbai attack in 2008, to India, raising the threat of formally linking the ISI to international terrorism. Fourth, it is openly committed to aligning with India as a strategic partner in Kabul as part of the New Grand Silk Route linking emerging markets.

What does that mean?

The rupture between the Pentagon and the Pakistani military was triggered by bitter strategic differences about the future shape of Afghanistan. It cannot be papered over by the latest terms of "reconciliation" between them. Other flash points are bound to occur in the run-up to 2014. The problem is that the GLOC point of rupture has also isolated Pakistan among the 47 influential countries that comprise NATO. Worse, the continuing tragedy is that Pakistan's civil-military leadership has been unwilling and unable to formulate a new national interest paradigm for Pakistan in which regional and global integration and internal stability rather than international isolation and political and economic anarchy come to characterize Pakistan.

The trouble is, that's not good for the US or India, either -- apart from the bitter elation of schadenfreude.