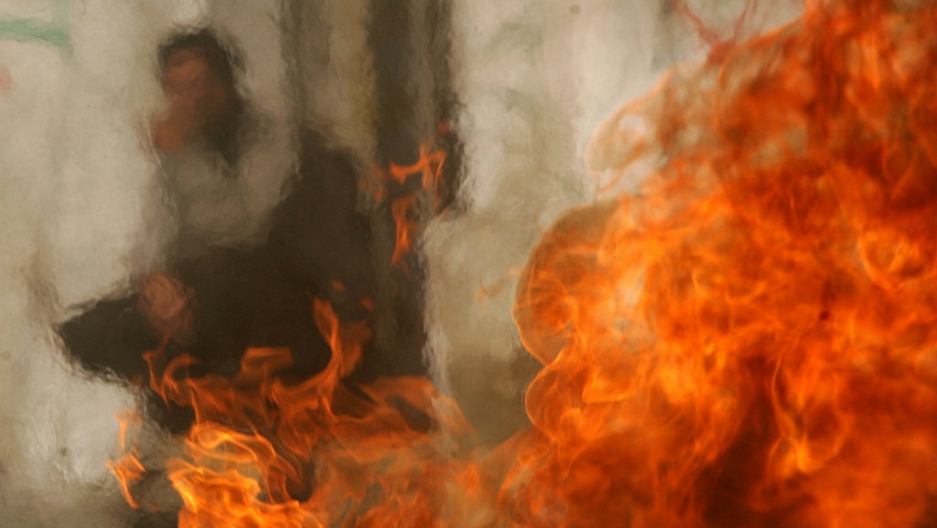 A file photo from 2006 of a man standing next to a burning car in the Gaza Strip. At the time, violence flared between Fatah and Hamas. Recent efforts at reconciliation between the two rival factions are faltering.
Credit: Abid Katib
Share

In Cairo just over a year ago, leaders signed a landmark reconciliation pact to end the years-long divide between rival parties, Hamas and Fatah, which run separate governments and security apparatuses in Gaza and the West Bank.

But now Palestinian politics appear to be descending back into disarray.

Under the Hamas-Fatah agreement, the Central Elections Commission was slated to start registering voters and updating Gaza’s electoral roll this past Tuesday. The pact also envisioned a transitional caretaker government, and elections — hopefully resulting in a unity government.

But only 24 hours before registrations were to begin, Hamas ordered the commission not to go ahead with the project. That has revived the heated animosity between the two sides.

Following a Hamas victory in the 2006 legislative elections, armed fighters from the factions fought a series of bloody street battles that routed Fatah from Gaza in 2007, paving the way for Islamist control of the coastal enclave.

Fatah now leads the Western-backed Palestinian Authority (PA) in the West Bank. But the bitter enemies were brought together in the wake of the popular uprisings that swept Tunisia, Egypt and Libya in 2011.

“Re-opening the Central Elections Commission in Gaza was the only practical step taken on the ground after the agreement,” said the director of the Gaza branch of the commission, Jamil Al Khaldi.

The two sides had agreed that registered voters would eventually elect a parliament, a president, and representatives for the Palestinian National Council, a legislative body said to speak for all Palestinians, including those outside the territories.

“We proved to the people that the reconciliation efforts are serious ones,” Al Khaldi said. “But now, we are taking a step backwards.”

Hamas claims that it had no choice but to intervene.

Officials of the Islamist authority say that in recent weeks, Fatah has quietly staffed the Central Elections Commission with employees sympathetic to the secular, Ramallah-based movement — compromising the body’s impartiality.

They also say Fatah has failed to respect certain crucial aspects of the agreement. Hamas gripes that Fatah has arrested some of its members in the West Bank, and has delayed the release of others from prison.

That, they say, demonstrates the extent to which contentious political issues continue to eclipse the practical aspects of reconciliation.

“[Fatah] changed some of the commission’s employees, and not all of them are independent,” Gaza’s Hamas government spokesman, Taher Al Nounou, told GlobalPost on Thursday. “They continue to arrest our members in the West Bank, and they refuse to release the [Hamas] detainees. There is no real partnership for reconciliation.”

Fatah, which in the past has indeed used security forces to arrest and detain Hamas activists in the West Bank, now says they have backed-off the security campaign, and are committed to moving forward with reconciliation.

They charge Hamas is to blame for stalling rapprochement.

“I have contacted the Palestinian police in the West Bank, and asked if such a [crackdown on Hamas] happened. They were surprised,” said Dr. Sabri Saidam, a member of Fatah’s West Bank-based internal legislative body, the Revolutionary Council. “I have a feeling that this is more of political decision. With elections lost from the formula [of the deal], it will delay the entire process.”

Hamas has also come under fire from the international community for pausing voter registration in Gaza, where between 250,000 and 300,000 out of roughly 1.5 million people are eligible to vote.

On Thursday, United Nations special coordinator for the Middle East peace process, Robert Serry, called on the authorities in Gaza to allow the commission to restart its work. He called the development “very disappointing,” according to a statement from his office.

“Hamas claim their members in the West Bank cannot go to the commission’s stations and renew their voter details, and they are afraid if this situation continues in the West Bank, they will find themselves completely out of the elections process. And they are right,” said Khalil Abu Shammala, director of the Gaza-based Al Dameer Center for Human Rights, and member of the “Public Freedoms Committee” set-up to help implement aspects of the reconciliation deal.

More from GlobalPost: Mitt Romney will meet with Benjamin Netanyahu in Israel this summer

Shammala is no Hamas partisan; In April, Hamas issued an arrest warrant for him, for criticizing the government-run energy authority in Gaza.

“But it’s not the responsibility of Hamas to intervene and stop the work of the commission,” Shammala said. “It is unacceptable. But the claims of Hamas should be investigated.”

On the streets of Gaza, the news that long-overdue elections were delayed once again came as no surprise to ordinary Gazans.

“I don’t have hope that there will ever be full reconciliation,” said 45-year-old Ustaz Farid, the owner of an electronics shop on one of Gaza’s main boulevards. “Everyone is looking out for their own interests and not the interests of the people. It is all talk. On the ground, it is a much different reality.”

Twenty-three-year-old Abed, who helps run his family’s cosmetics shop in Gaza City, and was too young to vote in the 2006 elections, said he had planned to register to vote this week.

“I wanted to vote, because as part of the new generation, I believe we all have a right to vote,” he said, adding that Palestinians should seize on the pro-democratic current sweeping the Middle East.

“The government here, they know the new generation wants a change,” he said. His family’s business continues to suffer because Israel, seeking to cripple Hamas, limits the amount of goods imported into Gaza.

“The old generation, they just want to hold onto power.”