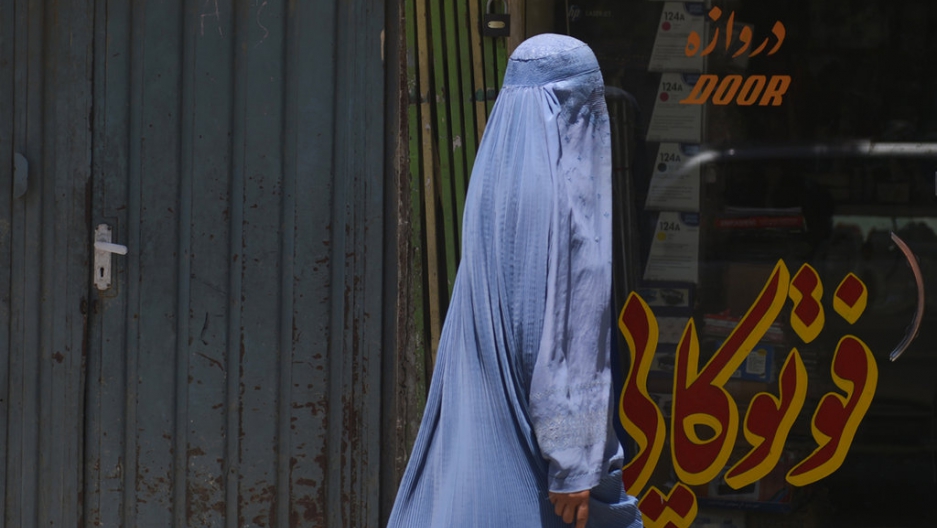 A burqa-clad Afghan woman walks in a market in Kabul on July 4, 2012. Afghan President Hamid Karzai will seek more than $4 billion in annual international assistance to rebuild the economy when he attends a conference this weekend in Tokyo.
Credit: Adek Berry
Share

WASHINGTON — Representatives from 70 countries and international organizations will meet in Tokyo on Sunday to discuss next steps in Afghanistan as foreign troops prepare to withdraw by the end of 2014.

The government of war-torn Afghanistan, which has received nearly $60 billion in foreign aid over the past decade, will seek at least another $4 billion from the assembled donors.

Participants at the Tokyo Conference on Afghanistan will help develop a roadmap for Afghanistan and determine whether the international community can deliver on its development goals, including the elusive goal of securing Afghan women’s rights.

Explaining that Afghanistan is still one of the worst places in the world to be a woman, Moosa said just $90 million is needed to begin to tackle the problem. “There's no excuse for donors not finding this sum,” she said, “and finally committing to end violence against women and girls at the Tokyo Conference this Sunday.”

Over the past several years, Secretary of State Hillary Clinton — who will be in Tokyo — has made several bold promises to the women of Afghanistan.

“We will not abandon you. We will stand with you always,” she said in 2010. Earlier this year, she pledged the United States would “continue to defend the rights of Afghan women.”

But as the War in Afghanistan, promoted in part as a war for the liberation of Afghan women, comes to a close, her promises, which echo similar statements made across the government and the military, will be harder to keep. In the decade since the Taliban government was toppled, there have been gains for the girls and women of Afghanistan. As the US withdraws its troops, it risks abandoning the very women it promised to help.

One way this plays out is the rule of law in Afghanistan's courts.

More from GlobalPost: NATO: Women's rights must be part of future plans in Afghanistan

The US has spent an average of $110 million annually on rule of law programs in Afghanistan over the past eight years, but courts on the national and local level continue to abuse Afghan women and girls.

Though the US government has been criticized for funding these judicial systems that are seen as failures of justice for Afghan women, America’s departure could actually make matters worse.

In March, Afghan President Hamid Karzai endorsed a “code of conduct” that encourages the segregation of men and women and allows husbands to beat their wives in certain cases.

The endorsement confirmed the worst fears of many Afghan women who worry that negotiations with the Taliban could lead to a reversal of what little progress has been made to protect and promote their rights.

“The conversation on the US involvement in the justice sector is a diminishing conversation, because basically all of the programs are being scaled back,” said Kenneth Katzman, a Middle East affairs specialist for the Congressional Research Service. “The conversation now is mainly how to keep the momentum going and not allow everything to backslide.”

While many US organizations are scaling back their work in Afghanistan, the US government continues to fund rule of law programs throughout the country. Increasingly, it has worked with the informal justice system, where anywhere between 80 and 95 percent of disputes are resolved.

A 2010 report by the federal institution United States Institute for Peace outlined discriminatory practices in the informal system, such as excluding women from siting on dispute resolution councils, as well as customary practices including ba'ad, when girls or women are traded to settle disputes.

“Several advocacy groups object to working with traditional mechanisms on the grounds that engaging these bodies will serve to entrench those practices that violate individual rights and discriminate against women and minorities,” the report read.

“It is clear that programs engaging traditional structures must be designed in such a way so as to not legitimate practices that are abhorrent and/or otherwise violate the law.”

But many of these practices continue, as reported by GlobalPost correspondent Jean MacKenzie in a Special Report titled, “Life Sentence: Women & Justice in Afghanistan."

More from GlobalPost: Clinton encourages women to shape their countries

The US government has pledged to continue to fund projects supporting the Afghan justice system, as part of a larger promise not to abandon the Afghan women it has worked to help.

“Approximately two years ago, USAID added a program supporting the informal sector to a basket of rule of law efforts. It expects to continue to support programs in both formal and informal justice,” a USAID spokesperson said.

Moving forward, some say that rather than focusing on the details of a deeply flawed legal system, the US should consider promoting the rights of Afghan women by funding community forums to further dialogue.

“The discourse of international human rights and individual rights rarely gains traction among many communities throughout Afghanistan ... it’s viewed to be more reflections of decidedly foreign value systems,” explained Tim Luccaro, a program officer in the Rule of Law Center at the USIP’s Kabul Office.

That is why a more collaborative approach between Afghans and aid-giving organizations will be vital in Tokyo, said Michelle Barsa, senior advocate and Afghanistan team leader for the Institute for Inclusive Security.

"'Mutual accountability' will be a central theme of the conference, one that is consistent with what women are asking for: greater transparency, participation of women and NGOs in monitoring aid distribution, and consultation of women in development of plans for how to move forward," Barsa said.

"The priority for Afghan women at this point is assurance that the international community will not abandon them post-2014," she added. "We've already seen the security transition have a negative impact on women's freedoms. Afghan women are looking for commitments from international donors to work with them to protect the gains women have made over the last 10 years."