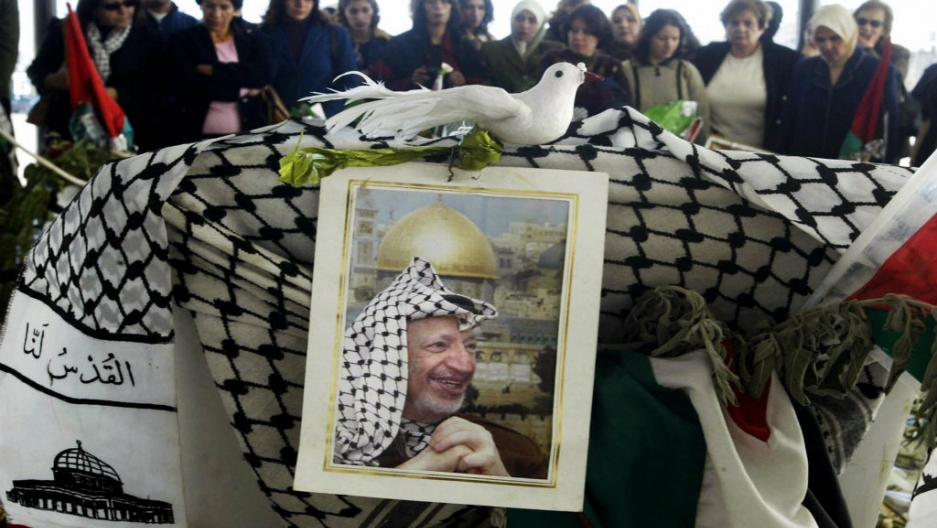 Was Yasser Arafat assassinated with Polonium, or did he die from "Palestinium" as Israel claims?
Credit: Awad Awad
Share

JERUSALEM — For a man who single-mindedly devoted his life to a high-profile public cause and lived his days in the public eye, the death of Palestinian President Yasser Arafat on Nov. 11, 2004, in a French military hospital, was a very discrete affair.

Rumors, some of which took root immediately upon his death, have now had eight years to ripen.

And none has proved more enduring than the belief, held by many Palestinians, that their leader was poisoned by Israel.

This week, Al Jazeera has added a twist to the saga, by publishing a “nine-month investigation” asserting that a urine stain on Yasser Arafat's underwear, analyzed by a Swiss laboratory, suggests that he was poisoned by Polonium 210.

Timed as if to dovetail with this week's other Swiss-based physics headline — on Higgs boson — Al Jazeera broadcast a 50-minute special, explaining how it took Arafat’s belongings from a suitcase at his lawyer's office, and had them examined at the Institute of Radiation Physics in Lausanne.

If the claim proves verifiable, it will be a remarkable turn of events.

Polonium is the radioactive isotope used to poison former KGB agent Alexander Litvinenko, who succumbed in London in 2006 after suffering acute radiation sickness.

The Al Jazeera report alleges that Israel possesses Polonium, which is not commonly available. "It's not so easy to get," says Dr. Michal Macek, a Slovak nuclear physicist at the Hebrew University of Jerusalem. "Actually, it is really hard. It is either produced in an accelerator or in nuclear reactors. In nature it is very rare."

Also, Macek adds, "the half-life of Polonium 210 is roughly 138 days, so its amount would be decreased about 10 million times during eight years."

More from GlobalPost: Yasser Arafat may have died of polonium poisoning

Writing in Hebrew, Ronen Bergman, the senior Arab affairs analyst at the Israeli daily Yedioth Acharonoth, wrote that "the assertion of Polonium poisoning, coming from a Swiss laboratory, is the most serious contribution to the debate since Arafat's death."

Not really, scoffs Yigal Palmor, spokesman of Israel's foreign ministry. "The truth is that Arafat did not die due to Polonium. He died from an overdose of Palestinium."

The Swiss laboratory that examined Arafat's personal effects, at the request of Suha Arafat and Al Jazeera, verified via DNA testing that the items belonged to Arafat, according to spokesman Darcy Christen.

However, Christen underscores, "We have never said there was Polonium poisoning. Yes, we found Polonium 210 in more elevated levels than what one might have expected, but the clinical description of Chairman Arafat's symptoms prior to his death is not compatible with Polonium poisoning."

Christen says that one must "go to Mr Arafat's mortal remains if one wants to draw conclusions."

That is exactly what the Palestinian Authority is now planning to do. Following the Al Jazeera report, it has announced that Arafat's body will be exhumed for further examination.

No plan has been announced to release the medical records. That is what the Israeli foreign ministry wants people to focus on.

"If ridicule could kill," says spokesman Palmor, "this Al-Jazeera report would be the prime suspect in the so-called Arafat murder mystery. The entire ‘investigation’ is a vine leaf to conceal the truth about the death of Arafat, and that truth is found in the medical documents. He did not die on a deserted island. He died in a military hospital in France and all the documents located in the hands of French authorities and the merry widow."

Palmor adds, "I don't know where you get Polonium. Polonium costs a lot of money. But Suha Arafat has a lot of money that belongs to the Palestinian people, so she might know."

In a breathless blog post updated after the special report was aired, Al Jazeera correspondent Clayton Swisher displays a photo of himself embracing Arafat, and claiming the investigation is akin to those calling for clarification regarding the assassination of President John Kennedy.

"As an American reporter," he writes, "it is not lost on me that nearly 50 years following his death, people still contest the fact pattern surrounding the 1963 assassination of US President John F Kennedy. As a resident of Qatar, I better appreciate today how people in this region closely follow the 2005 assassination of former Lebanese Prime Minister Rafiq Hariri. The above cases both left behind a blaze of forensic and eyewitness evidence. Each had investigators empowered with the full force of law. In the case of President Kennedy, it was a Congressional mandated inquiry. In the case of Prime Minister Hariri, it was a UN Security Council-mandated Investigative commission."

In fact, Arafat's death, however often referred to as an unsolved mystery, is a rather a well-studied event.

In 2005, The New York Times gained access to Arafat's medical records and reported that he died of "a stroke that resulted from a bleeding disorder caused by an unidentified infection."

The finding, according to the New York Times, "suggests that poisoning was highly unlikely and dispels a rumor that he may have died of AIDS. Nonetheless, the records show that despite extensive testing, his doctors could not determine the underlying infection."

The mystery of the unexplained infection was addressed in 2007 by Dr. Ashraf al-Kurdi, Arafat's private physician for 18 years until his death. In an interview published by the Jordanian news site Amman, in 2007, Dr al-Kurdi stated that the HIV virus was identified in Arafat's blood but that Arafat did not die of AIDS.
Amman quoted al-Kurdi, a Jordanian, saying that the virus had been injected into Arafat's bloodstream close to his death, and that the real cause of death was poisoning.

At the time, Al Jazeera interviewed al-Kurdi but terminated the live interview when he mentioned the HIV virus found in Arafat's blood.