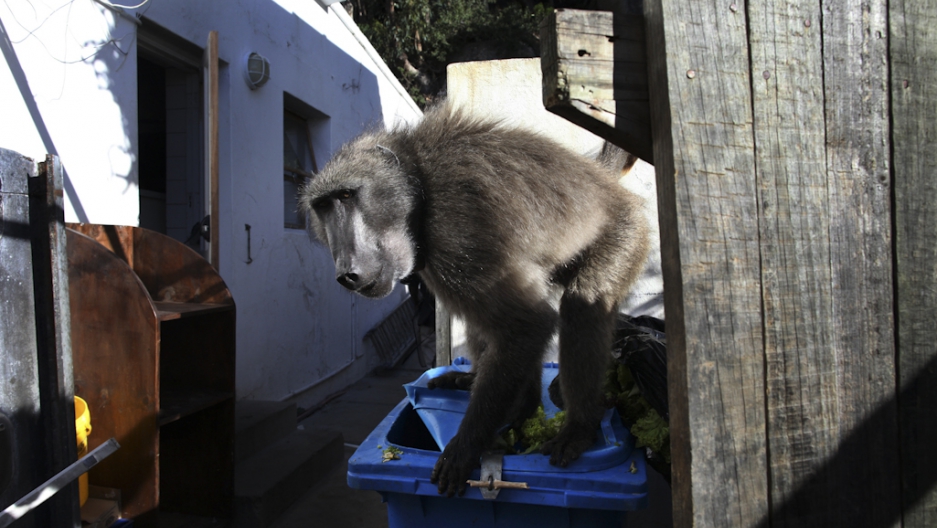 A male baboon grabs food from a trash can at a local restaurant July 3, 2010 in Cape Town, South Africa. Urbanization is believed to be the main reason for the loss of the natural baboon habitat and increasing conflict between baboons and humans. Baboons are seen as a menace while they forage for food in an urban environment breaking into restaurants, garbage cans, where ever food is visible. While many are busy chasing the primates away from their homes and businesses, Baboon Matters, a non-governmental organization attempts to educate and protect baboons to ensure their long-term future on the Cape peninsula.
Credit: Paula Bronstein
Share

Baboons open the car doors of unsuspecting tourists, and raid homes in search of food. There are warning signs everywhere: "Baboons are dangerous and are attracted by food," some of the signs say. Or just simply: "Baboons!"

Some of the baboons have been euthanized: one infamous alpha male named Fred was captured and killed last year by city officials worried about his aggression, which was fueled by tourists feeding him.

So it seems a bizarre premise for a documentary series, never mind one aired on a National Geographic TV channel: stock a house with food, lure in baboons, and let the animals go wild.

For the new Nat Geo Wild show, "Big Baboon House," a house near Pringle Bay, about 50 miles from Cape Town, was modified to allow hidden cameras to film a troop of Chacma baboons, creating a Big Brother-style show. Windows and doors were left open to let in the baboons.

On "Big Baboon House," the animals are anthropomorphized to within an inch of their lives, given human voice-overs and different names and personalities.

In one episode, a man dressed as Santa leaves gifts of food for the baboons next to him on the bed while taking a nap.

Residents of the communities around Cape Town say they are in a constant battle to keep baboons out of their houses— and are shocked that a National Geographic show would actually encourage baboons to seek food from humans.

Kas Hamman, acting CEO of CapeNature, a government-run conservation body, told the Cape Times that feeding baboons "can eventually lead to their destruction."

“We are disappointed that a reputable international wildlife conservation organization such as National Geographic would even consider associating themselves with such a seemingly unethical documentary and distorted conservation message. It is unacceptable and quite shocking,” Hamman told the newspaper.

“CapeNature condemns the feeding of baboons and the deliberate staging of an environment to encourage raiding behavior by baboons," he said.

According to the Cape Times, National Geographic said in a statement that the baboons were not lured into the house, but "ultimately entered it of their own volition."

Meghan Gleason, digital media content producer for National Geographic Channels, wrote on an official blog that Nat Geo Wild had “undertaken a simian social experiment of a lifetime” to understand baboon behavior “so we can learn how to keep them out of homes and coexist peacefully with their human counterparts … all while having a little fun along the way as we observe these baboons having free rein over a posh house."

This is the second time in recent months that a documentary series aired on a National Geographic channel has created controversy in South Africa.

A deadly great white shark attack off Cape Town in April sparked anger at a documentary maker who was filming shark research in the area.

David Lilienfeld, a 20-year-old champion body boarder, died after a "huge and aggressive" shark severed his right leg at the hip.

US-based documentary maker Chris Fischer had been filming "Shark Men," a documentary program which has aired on the National Geographic channel, in waters near Cape Town.

While South Africa's environmental authorities previously said the "Shark Men" project was a great opportunity for researchers, and posed no danger to swimmers, some South Africans accused Fischer's team of attracting sharks to swimming areas by releasing chum into the ocean.

The "Shark Men" project involves catching and tagging great whites on a specially designed boat, and has been praised by some scientists who say the data collected is crucial in understanding shark populations under threat.

But critics have argued the practice is harmful to sharks, and have launched online petitions calling on South African authorities to halt the shark tagging.

In March, in another National Geographic-related incident, wildlife filmmaker John Varty — whose TV show "Tiger Man" airs on Nat Geo Wild — was hospitalized after being mauled by one of his tigers in South Africa.