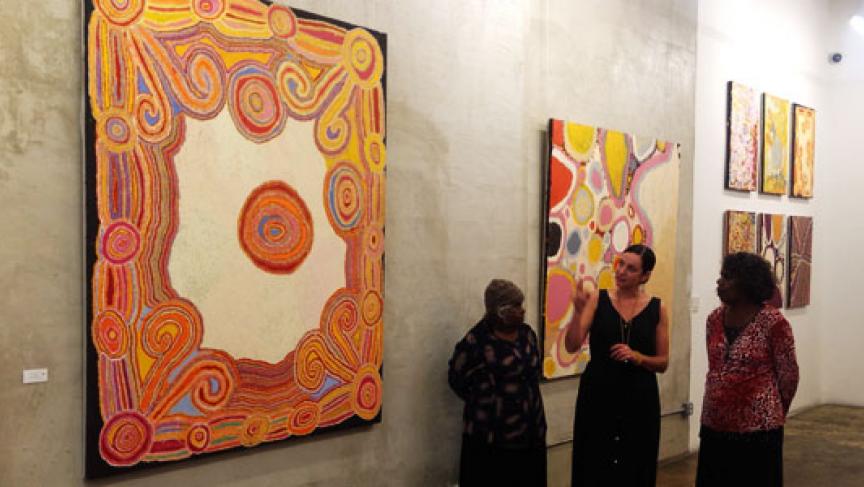 Share
The canvases on the walls at gallery nine5 are covered with amorphous forms and twisting patterns almost dizzying to the eye. At the show's opening, gallery visitors Karl Ryan, David Barrish, and Dana Dawson shared their impressions. "I think it looks just kaleidoscopic," said Karl Ryan, "Just cool colors." "Burnt siennas, oranges, yellows," said David Barrish. "It's kind of aura based," said Dana Dawson, "everything has outlines to it, growing out of some core object. "Very vibrant, very interesting to look at, very appealing to the eye," Ryan reiterated. Without a doubt, it's abstract art. The paintings wouldn't be out of place hanging next to Pollacks or Motherwells. But these works weren't produced in New York or Paris. They were painted in the Australian outback by indigenous artists — artists like Yangi Yangi Fox. "We live in a country that has stories all around us," said Fox. "And we put those stories in the painting so that people understand the stories. The canvases are a means of telling the stories." These so-called "dreaming stories" are a sort of aboriginal mythology passed down through the generations. The abstract forms in Fox's paintings represent the actions of ancestral beings, and geographical features, such as hills and water-holes. The stories are an important part of traditional culture, regularly told verbally or sung at family gatherings. Fox and the other artists from the exhibition live in Kalka, a community of 150 people in Australia's vast central desert, a four hour drive to the nearest town with a post office. They paint at Ninuku Arts, one of about 100 indigenous Art centers that receive funding from the Australian government. Claire Eltringham manages the center and came to New York with several of the artists to visit the exhibition. "Art centers are community-based, indigenous-owned organizations," Eltringham said. "They're one of the only places where people can find employment and earn money and support their families." For impoverished villages in the outback, that money is pretty significant. One painting at the SoHo show sold for almost $20,000. One Australian government auditor estimates that fine art sales bring in a total of $40 million annually to indigenous communities each year. The record sale price for a single painting is $2.4 million, for a work by Clifford Possum Tjapaltjarri. "You can't go anywhere in Australia now and find a gallery that doesn't have aboriginal art," said Fred Meyers, an expert in aboriginal art and culture at New York University. Meyers said says aboriginal painting caught on with international audiences in the '80s, partially because of its resemblance to contemporary abstract art. Since then, proceeds from art sales have been used for everything from community swimming pools to dialysis centers. He said the art centers have created an economic model that allows aboriginals to stay in their traditional lands, rather than have to migrate to the cities for jobs. "They want to stay on the land, they want to stay on their own country. They feel that their country is getting respect and value in the outside world. So there are many levels in terms of cultural respect that this has been important." In general, painting has been a much-needed success story for aboriginals. Indigenous Australians continue to suffer disproportionately from social ills such as poverty, alcoholism, and domestic abuse. For Eltringham, the art movement provides a counter-narrative to the kind of patronizing and neglect has been endemic in Australia for decades. "One of the reasons that I'm really proud to be involved in Aboriginal art is because I see it as one of the few places where indigenous people have got the power to actually determine their future," she said. "And it's also through the medium of paint, so it's a really beautiful thing."