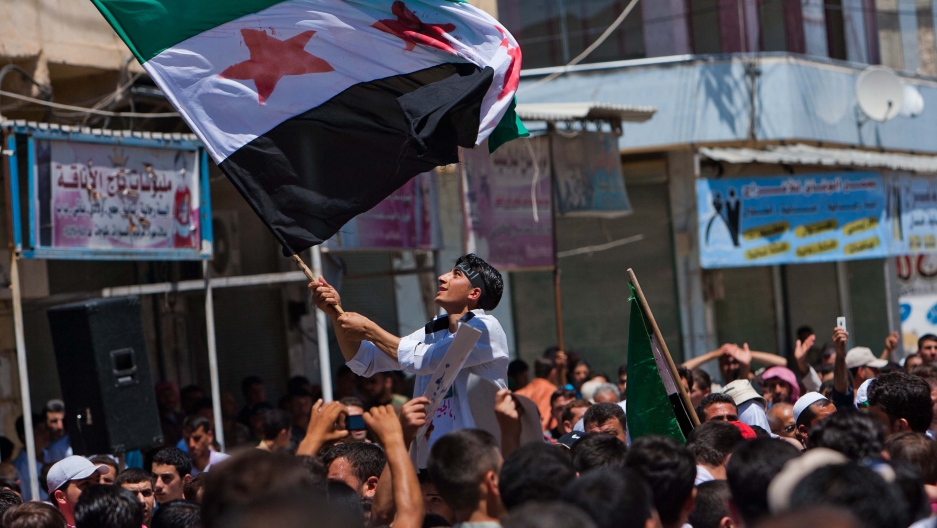 The Syrian uprising is now 15 months into an effort to bring down the regime of President Bashar al-Assad. The Assad family has ruled the country for more than 40 years.

Traveling to towns and villages north and southwest of Aleppo, Syria’s largest city, GlobalPost saw dozens of burned out tanks, armored vehicles and jeeps littering the roads. Many villages were devoid of any active police or government presence.

Instead, armed rebels patrol in pick-up trucks, some with mounted machine guns, while many schools across the country’s northwestern Idlib and Aleppo provinces fly the green-striped flag of Syria before the ruling Baath Party, a symbol of the revolution.

“We have liberated most of Aleppo’s countryside and so our next target will be Aleppo city itself,” said Abu Omar, a commander with the Freemen of the North Brigade, a unit allied to the rebel Free Syrian Army, in Daret Ezzah, a town just northwest of Aleppo.

“We are close to controlling all the villages and towns along the Turkish-Syrian borders, which means we can get more and better weapons.”

Fighters from the Free Men of the North last week joined with defectors inside a Syrian military base in Daret Ezzah to take control of it, seizing anti-aircraft guns and weapons before burning it to the ground. The rebels later broadcast images of a massacre of 25 men, which they claimed were shabiha, pro-regime militia.

More from GlobalPost: Syria: Brutally violent shabiha militia member tells it like it is

Last month GlobalPost’s Tracey Shelton reported on rebels in Idlib repelling an assault by regime tanks on Ariha, having fought to wrest control of the town from the military in May. Since last October, rebels based in the hills of Jebel Zawiya, just further south, have been battling government troops who have failed to uproot them.

In Armanaz, 20 kilometers northwest of Idlib, rebels drove out government forces on June 20 after weeks of clashes, a fighter with the Idlib Martyrs Brigade said last week. The Brigade consists of 12 rebel battalions of hundreds of fighters who now coordinate attacks across north Syria.

“Over the last week we have got hold of anti-tank missiles and can now destroy the same number of tanks in a few days as we used to in a few months,” said Abu Mohammed, a 25-year-old farmer who joined the rebels after he said his two brothers were killed by regime troops.

A reporter from McClatchy Newspapers in early June visited rebel positions further south along the fertile plains of the Orontes River, suggesting opposition-held territory may extend to within 20 miles of Hama. The conflict reached to within striking distance of the president’s hometown of Qerdaha last month, just 12 miles across the mountains from Haffa, where rebels had seized control before being driven out by a bombardment that largely destroyed the town.

“The FSA is expanding rapidly in our region,” said Ibrahim, 26, another farmer who joined rebels fighting in Deir Jammal, north of Aleppo. After his brother-in-law was killed in April during a protest, Ibrahim now plants homemade mines among the olive trees he’s farmed his whole life.

“We are now hundreds of fighters, but I am sure if there is a secure shelter at the Turkish border then thousands of soldiers and secret police will defect,” he said.

The territorial gains of rebels in northwest Syria came as both the Assad regime and the opposition officially rejected a transition plan brokered by the United States and Russia in Geneva last week.

The plan contained no explicit call for Assad to step aside, a long-standing precondition for the opposition to engage in any talks on forming a national unity government.

The rebel gains come amid escalating tensions along the Syrian-Turkish borders. Ankara scrambled six F16s over the weekend in response to Syrian helicopters flying close to its border and has pledged to treat as hostile any Syrian military incursions.

After a Turkish reconnaissance plane strayed into Syrian airspace and was shot down by Syria’s Russian-supplied air defense system on June 22, Turkey deployed some troops and anti-aircraft missile batteries to the border.

London’s Sunday Times newspaper reported over the weekend that diplomats in the region believe Russian technicians played “a key part” in the interception and shooting down of the Turkish jet.

As Russia continues to arm the Assad regime, across the border in southern Turkey a spate of recent reports in US media suggests CIA officers are now operating secretly to coordinate delivery of arms to Syrian rebels paid for by Gulf states Qatar and Saudi Arabia.

Rebel leaders hope that as well as hosting the leadership of the Free Syrian Army in southern Turkey, Ankara will now relax control over weapons flowing across its border into Syria.

“For a long time, Turkey was preventing the delivery of specialist weapons to us, like anti-tank missiles and anti-aircraft guns,” said Abu Omar of the rebel Freemen of the North last week. “In the last few days FSA leaders in Turkey told me that that has now changed.”

With unprecedented heavy clashes between Presidential Guards and rebels last week just a few miles from Assad’s palace, the Syrian leader declared the country was now “at war.” The death toll from the conflict now exceeds 15,000, according to some rights groups.

Having lost control of the rural northwest, the regime has focused instead on its bombardment of major cities like Idlib and Rastan. Syrian forces appear to be increasingly relying on airpower to punish opposition held areas. Assad’s Russian-supplied helicopter gunships pounded Saraqeb, a strategic town on the main highway through Idlib, over the weekend.

“Before the regime was using tanks and elite forces to try and get back control of Idlib. But today the land is for us and the sky is for the regime,” said Abu Mohammed of the Idlib Martyrs Brigade.

GlobalPost saw dozens of military trucks carrying tanks and armor toward Aleppo, while inside the city plain-clothed security and regime mercenaries who once maintained fear on the streets were replaced by patrols of uniformed soldiers.

The loss of any part of Aleppo city, Syria’s commercial capital and home to wealthy Sunni traders who have yet to turn against the Allawite-led regime, would be a strategic disaster for Assad.

GlobalPost Senior Correspondent Tracey Shelton and another GlobalPost reporter inside Syria contributed to this report.