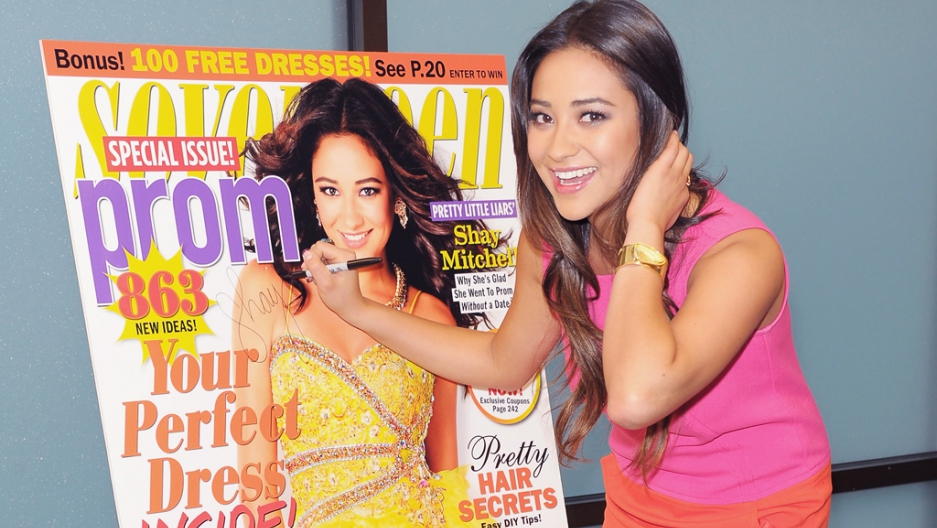 Actress Shay Mitchell promotes her Seventeen Magazine Prom Issue cover at Barnes & Noble on March 16, 2012. A 14-year-old from Maine, Julia Bluhm, started a petition asking for Seventeen Magazine to publish at least on unaltered photo spread a month. She handed the petition, with at least 15,000 signatures, to the editor-in-chief on May 2, 2012.
Credit: Michael Loccisano
Share

Seventeen magazine has responded to a high school student's online petition and pledged to feature only real, unaltered images of girls.

AFP reports that editor Ann Shocket's letter to readers for the August issue outlines a new "Body Peace Treaty," which vows to "always feature real girls and models who are healthy"and "never change girls' body or face shapes (never have, never will)."  The news agency says Seventeen will still tweak photos to smooth wrinkles on clothing or get rid of flyaway hair.  However, it will be "totally up-front" about what goes into photo shoots and post before-and-after shots on its Tumblr page.

The announcement comes after Julia Bluhm, a 14-year-old blogger from Maine, stared a change.org petition in April, asking Seventeen to print one unaltered photo in its magazine each month.  The New York Times reports that Julia had 25,000 signatures within days.  She was invited to Seventeen’s offices to discuss her thoughts and shortly afterwards the number of signatures increased to 84,168.

Julia has commented on the change.org page saying: “Seventeen listened!” She added: "This is a huge victory, and I’m so unbelievably happy.”

Julia is a member of SPARK, an organization fighting to end the sexualization of girls in media, and they are now petitioning Teen Vogue to follow Seventeen's example. “Seventeen was supposed to be a jumping off point to reach all print media, so we’re continuing on with that goal,” SPARK's Emma Stydahar, 17, told AdWeek.  “Once people are looking at themselves not in comparison to these unrealistic standards of beauty, that’s when they start realizing that what they’re seeing in the mirror is beautiful without retouching, whether it be with makeup or Photoshop.”

More from GlobalPost: How do journalists write about Africa?