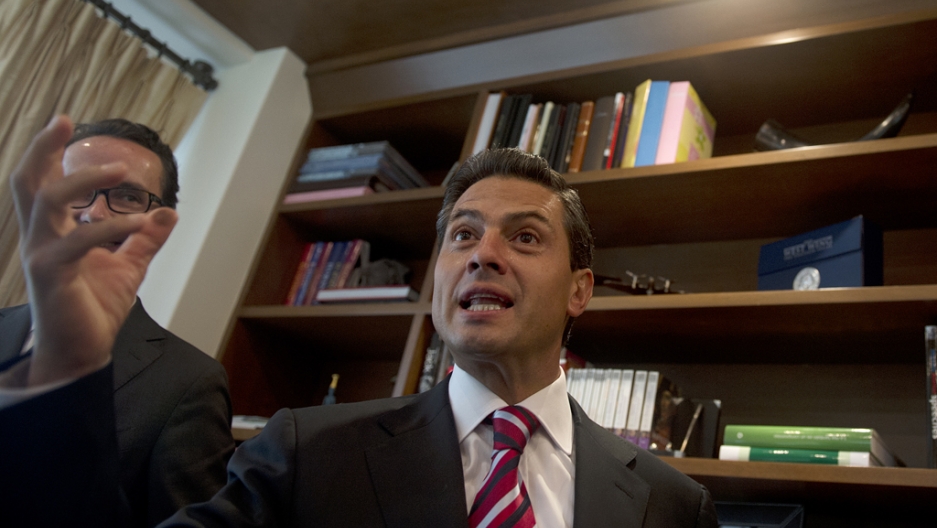 MEXICO CITY, Mexico — With Enrique Peña Nieto of the Institutional Revolutionary Party (PRI) called the winner of Mexico’s presidential election, a burning question is circling: Is this a return to the corruption of the party’s past, or a new era of Mexican governance?

But before that gets answered, Mexico could find itself on the verge of another political crisis. At a late Monday press conference, second-place finisher Andres Manuel Lopez Obrador — a left-winger known as “AMLO” — said he saw widespread evidence of electoral fraud and irregularities. He pledged to challenge the Mexican election results.

Meanwhile, the pronounced winner Peña Nieto is expected to take office Dec. 1, and he's working hard to convince the world that his victory heralds — as his op-ed in The New York Times puts it — Mexico’s Next Chapter, not a step backward.

His party, the PRI (pronounced “pree”), ruled Mexico from 1929 to 2000 under what the writer Mario Vargas Llosa called “the perfect dictatorship.” Consecutive PRI governments kept an illusion of democracy, critics allege, while maintaining seven decades of unchecked political rule.

Many remember the PRI leadership for high corruption and tight controls on freedom of expression. But others look back fondly on that era for large-scale development and infrastructure projects. Mexicans also recall it as a time when narco violence did not define the country. Mexicans believe that’s because the PRI brokered backdoor negotiations with cartels to keep fighting at bay, but party leaders deny the charge.

Gruesome violence has exploded in parts of the country since President Felipe Calderon, of the center-right National Action Party (PAN), took office in late 2006, and used the military to fight drug cartels. Mexico’s estimated drug-war-related deaths since that time has soared above 55,000.

Just before midnight Sunday, Peña Nieto’s acceptance speech zeroed in on promises that helped him defeat his challengers. Namely, he said his government would part with corruption, bring prosperity and stability back to Mexico and squash the violence.

“There will be no pact with those responsible for the 60,000 dead,” he said, addressing suspicions that the PRI would negotiate with the drug traffickers.

“My priority will be to reclaim peace and freedom,” Peña Nieto, 45, said.

Yet the PRI will have to hunt for support throughout the “sexenio,” Mexico’s six-year presidential term. Winning 38 percent of the vote, Peña Nieto beat out leftist AMLO by 6 percentage points, and the governing PAN candidate Josefina Vasquez Mota by 12, the federal election commission said late Sunday.

Calderon by law was not allowed to run for re-election.

More from GlobalPost: Why Mexico's election doesn't matter to Americans

But presidential candidates weren’t the only names on ballots Sunday. Mexicans had to choose a slew of politicians, including lawmakers, governors and mayors.

In the national legislature, Peña Nieto’s party garnered well short of a majority. That means PRI lawmakers will have to fight hard to pass bills, particularly if opposing parties form alliances to block the new government’s legislation.

Security analyst and former Mexican intelligence officer Alejandro Hope says that lacking a majority will not make governance easy, even with regards to the PRI’s much-needed plans to make the country safer.

Hope questions the logic of Peña Nieto’s plan to create a specialized, gendarme police force to rein in violence. He believes that sincere improvements to security will have to come from PRI politicians themselves.

Recently, PRI politicians have faced serious corruption charges: Tomas Yarrington, former governor of Tamaulipas, has alleged financial links to both the deadly Zetas drug gang the its rival Gulf Cartel; and Narciso Montano, ex-governor of Baja California Sur, is accused of misappropriation of tens of millions of dollars.

“What Peña Nieto will have to do is get PRI governors to step up to the plate, and put some effort into reforming the local police forces,” Hope said. “He’ll have to improve the justice system, and create local conditions to pull [the armed forces] out.”

Hope reckons that Washington distrusts the PRI. He believes US officials will be wary of Mexico’s new administration pushing for any drastic changes to its security policy, particularly its approach in the US-backed drug war.

He refutes the idea that the PRI would achieve peace by making pacts with cartel leaders.

“There are so many more drug gangs operating in so many more places [than there were when PRI last ruled],” he said. “It’s going to be very difficult to go back to that system [of negotiating with cartels].”

Peña Nieto now needs to convince the millions who voted against him that the administration won’t take that old tack.

At the core of the opposition is a group whose members were mostly too young to know or remember alleged past PRI government crimes. They're a student movement called Yo Soy 132, or I Am 132. Their central goal, since kicking off in May, has been to prevent the PRI from winning, and to challenge Mexico’s major television networks they accuse of lofting Peña Nieto to stardom.

Ana Rolon, a member of Yo Soy 132, says the election results mean that the movement will have to continue to advocate for a more democratic Mexico, and put pressure on any actions that suggest otherwise.

“For now, we may not see much of a change in the type of party that is governing us, but we can now see a lot more people socially and politically involved,” Rolon said. “We’re going to keep working on what we started, but with less hurry, and with longer, better established goals.”

Blancoestrella Guzman, a retired accountant in Mexico City, is one of the 20 million Mexicans who voted PRI. She says she expects Peña Nieto to form a plural, open and inclusive democracy and to use his six years in office to fight poverty.

“I want to see him bring water to some of the marginalized communities nearby and across the country, bring down the cost of electricity and maintain the price of staple foods,” she explained, as the last of the votes were counted on Monday.

Guzman is also attracted to his promises of better education, more infrastructure, rights for women and improved security in the country.

Even though she voted for President Vicente Fox, of rival PAN, in 2000 to boot the long-ruling PRI, she says she now believes the PRI is the best option for Mexico’s future.

“Look, I’m 62, I grew up under the PRI,” she says. “I voted for Fox to make a change, but I didn’t see any changes. It’s not that old PRI era any more, so why not give a chance to this new government, ready to work for change?”