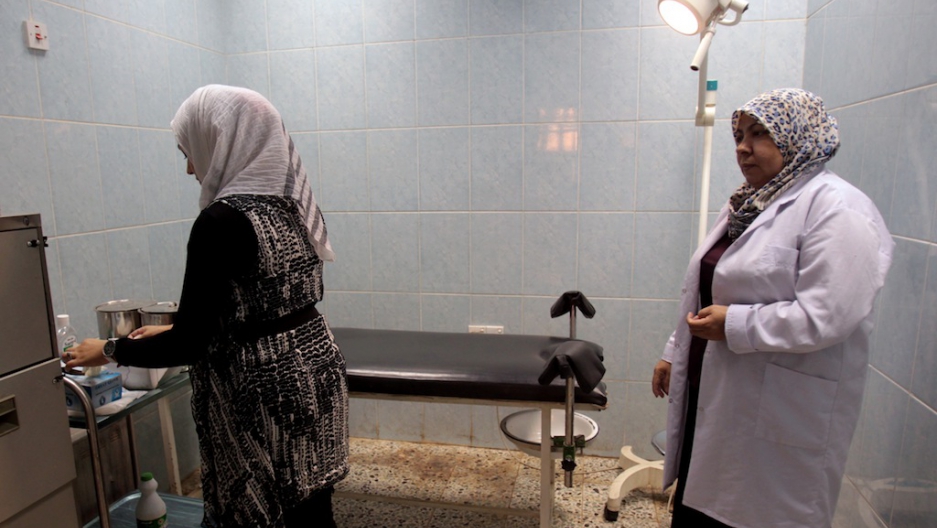 Female employees at Medical Legal Institute (MLI) in Baghdad check the equipment in the room where virginity tests are performed on June 28, 2012. Iraqi women face court-ordered virginity tests that often show they were virgins until marriage but shame them nonetheless.
Credit: ALI AL-SAADI
Share

Across the Middle East and North Africa, virginity tests have been a staple of a culture that puts a high premium on female modesty, sometimes to the point of ordering invasive procedures to preserve a family's honor. Husbands who believe their new brides aren't virgins can now take their cases to court in Iraq, where women are forced to undergo testing if their virginity is in doubt.

Doctors and a lawyer in Baghdad this week spoke to AFP about court-ordered virginity testing in Iraq, saying it was becoming prominent and that there are "several" tests performed every day.

Throughout the Muslim world, a new bride's virginity is a big deal and honor killings are common in many countries. Male relatives will often murder female family members for assumed dishonor. But according to Dr. Munjid al-Rezali, director of the Medical Legal Institute where the tests are performed, many women who truly are virgins are brought before the court and humiliated by invasive medical procedures for such slights as their husbands' impotence.

"Most of the cases we received after the first day of marriage," said Dr. Al-Rezali to AFP. "The husband claim [sic] that she is not a virgin, and then the family bring her here, through the courts, this all come through the courts, and we examine her."

Of course, a hymen can break at any time in a girl's life, for simple things such as horseback riding or falling from a tree. But if an Iraqi woman is found to have a broken hymen, the assumption is that she lied about being a virgin, and there is no legal protection for the woman in this situation.

“They think that during the marriage, [the] first day of marriage, there should be blood... they think if there is no blood, there is no virginity,” said Dr Sami Dawood, a forensic doctor at the MLI who has been involved in the tests.

Dr. Al-Rezali believes the virginity testing is a by-product of a lack of sex education and general knowledge in the country when it comes to reproductive science, because the courts are the only ones that can order a virginity test.

In general, the procedure takes 15 to 30 minutes, and a woman is always one of three doctors present. The results are then studied by at least two other doctors. If it is found that the woman is not a virgin, her family is required to compensate her husband. But this result is rare, and Dr. Al-Rezali says that the test generally result in a favorable result for the woman, according to AFP.

The virginity tests are not new phenomenon in Iraq, and have been used for years to determine a woman's virginity, yet they were generally done on requests from male relatives or husbands, not the courts. It's a common practice across the region, and has come under fire this year in Egypt as well, after protesters in Tahrir Sq. were forced to undergo virginity tests after being detained by military forces.

Liesl Gerntholtz, the director of the Women's Rights Division at Human Rights Watch, said to AFP, "The Iraqi government should urgently put measures in place to ensure that women and girls are not forced to undergo physical examinations that are degrading, painful and frightening. The use of these tests in court should be banned."

For more of GlobalPost's coverage of women's rights in the Middle East and North Africa, check out our Special Report, "Life Sentence: Women & Justice in Afghanistan."