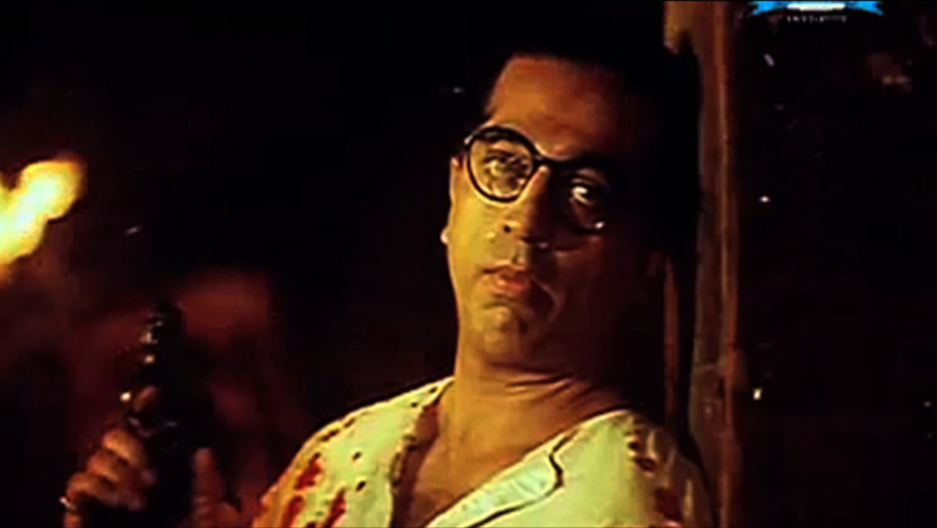 Superstar Tamil actor Kamal Haasan in the film, Hey Ram, about the assassination of Mahatma Gandhi and Partition of India and Pakistan. Haasan also produced and directed the film, released in both Tamil and Hindi in the year 2000.
Credit: Sonia Narang
Share

CHENNAI, India — When fans see Tamil movie star Rajnikanth on the street, they shout out, “My God!” But not because they're surprised.

“It’s not 'My God' in exclamation; it’s an address to his God,” another Tamil movie star, Kamal Haasan, explained.

As Haasan speaks in the studio run by fellow Tamilian and “Slumdog Millionaire” Oscar winner A.R. Rahman, the bangs and screeches of his upcoming spy thriller, “Vishwaroopam,” can be heard in the background. Haasan puts his cell phone on the coffee table and slumps back in the sofa, as the soundproof editing room door swings shut.

The Tamil film industry has always been about myth making. Hitting their stride during the Tamil separatist movement of the 1950s, film studios tapped the political energy of India's struggle for independence from Britain. And to promote the cause of Tamil nationalism, filmmakers drew on Hindu epics to create an archetypal Tamil hero. Built on that model, even today the Tamil screen legends are arguably more powerful, and more beloved, than the stars of Hollywood, Bollywood, or any other film industry.

The original Tamil megastar, Maruthur Gopalan Ramachandran, or “MGR,” became a massive political figure. On the strength of his celluloid image, in 1967 the Dravida Munnetra Kazhagam (DMK) party became the first political party, other than Congress, to come to power with a clear majority in any Indian state. And over the past 45 years, either the DMK or an offshoot that MGR created in 1972, has won every election in Tamil Nadu. Now, among the state's 11 chief ministers, no fewer than seven have hailed from the movie business.

For Rajnikanth alone, there are some 120,000 fan clubs around the world. In the frenetic leadup to a new movie, fans breathlessly await their hero's new look — shaving their heads or growing beards, sewing themselves the same costumes and taking more drastic measures to prove their loyalty.

More from GlobalPost: Tamil films give Bollywood a run for its money

In imitation of rituals normally reserved for Hindu gods, the faithful bathe three-storey effigies of their screen idols with milk, or parade their likeness through the streets on mammoth golden chariots. And then they watch the film — once for the excitement, once for the storyline, once to copy the hero's mannerisms, and once to memorize the dialogue. Then again and again, as long as it runs.

The quintessential modern example of that phenomenon is Rajnikanth,who made his film debut in 1975. While 57-year-old Haasan, who playedthe hero to Rajnikanth's villain in countless films early in theircareers, also remains a major box office draw, Haasan has grown instature as an actor, like Clint Eastwood or Robert DeNiro. Incontrast, Rajnikanth, now 61, has undergone an Elvis-like apotheosis..

“[Rajnikanth] is the first one to get this tag: 'Superstar,'” said Vanga.

In both form and content, the early Tamil flicks were not unlike the Bollywood romances of the same era. But their purpose, and message, was radically different, says K. Hariharan, a Tamil academic and director whose film “Ezhavathu Manithan” won India's national award for best regional film in 1983.

“Tamil Nadu actually wanted to secede itself from the nation in 1947,” Hariharan said. “Therefore, the Tamil cinema had to counter the national Hindi cinema, and also try to evolve it’s own language.”

To combat the notion that high culture, Hinduism, or even civilization, had been brought to the South from the North as part of the so-called Aryan invasion, Tamil films of the '50s and '60s projected the Tamil language as superior to all the other languages of India. They presented the Tamil woman as the pinnacle of beauty and chastity. And they portrayed the Tamil hero as the ultimate champion of the darker-colored, oppressed people of the lower castes.

More from GlobalPost: Bollywood's invasion of the white girls

On the strength of these films, in 1967, the DMK trounced the Congress Party — which had been unassailable throughout India since leading the independence movement.

And the South's new gods were born.

“You have the politicians building up one film hero, [MGR], as the ultimate Tamil folk hero,” said Vangal. “He’s invested with all the ethnic identity that they wanted to project for Tamil nationalist. From there, this whole cult of hero worship begins.”

Meanwhile, in family dramas and mythological epics, the other big stars of the era, Sivaji Ganesan and Gemini Ganesan, showcased the ideal values of a Tamil suitor, husband and patriarch.

When Rajnikanth and Kamal Haasan displaced these idealized Tamil figures in the late '70s, politics was again the key.

In 1975, Indira Gandhi — Nehru's daughter and India's third primeminister — declared a state of emergency, suspending elections andarresting many opposition politicians after a court ruling that voidedher parliamentary victory due to electoral misconduct. But while otherleaders across the nation opted to go to jail rather than acceptGandhi's usurping of the democracy, the DMK bowed to her will —betraying their Tamil nationalist roots.

Because there was no political alternative, however, the people expressed their anger culturally, abandoning old screen heroes in favor of their opposites.

They jettisoned the deep-voiced Ganesan — the stocky and grave idealization of Tamil masculinity — in favor of the lithe and flexible, nearly androgynous Haasan, a former classical dancer with large, expressive eyes. And they scrapped MGR — the fair-skinned, eloquent champion of the oppressed masses — for Rajnikanth.

“Rajnikanth was everything that [MGR] was not: He was dark, he was ugly, he couldn't speak the Tamil language properly, he smoked and he drank — something MGR would never do on the screen,” Hariharan said.

The underclass persona that Rajnikanth, a former bus conductor, developed for himself won him a more passionate following than MGR had ever enjoyed.  And in creating it, Rajnikanth also reinvented the Tamil blockbuster, driving it further and further away from the films made in Hindi and other regional languages.

Known for rhyming aphorisms or “punch dialogues,” gestures and gimmicks — like throwing a cigarette into the air and catching it in his mouth — that are repeated in all his films, Rajnikanth breaks all the conventions of movie-making. His most successful films are, to the outsider, bizarre mash-ups of genres, blending colossal fistfights, slapstick pratfalls, dance numbers and romance with no regard for logic or continuity.

More from GlobalPost: Complete coverage of the Other Bollywood

With no explanation necessary, he holds up his hand and a car screeches to a stop. He cranks his wrist, and the car reverses. He twirls his foot in a circle on the ground, and an eddy of dust grows into a whirlwind, carrying the villain into the sky. He catches the villain's bullet in his own gun and fires it back at him.  No, he's not playing a superhero. He's just Rajni, as his fans call him.

At key moments, like the trickster in a play, he breaks character to speak to the camera, directly addressing the audience. “I may have fed on my mother's milk,” he might say. “But I've grown up on the milk of the Tamil people's compassion.” Or “When I say something once, it's as though I've said it 100 times.”

In a region where class and color influence everything from your employment future to your marriage prospects, the persona and the token lines hit home. And though so far Rajnikanth has never turned one of his punch dialogues into a campaign slogan, a la MGR, speculation never ceases over which political party the superstar will choose if and when he quits making films.

But wait. This is Rajni. He doesn't join parties. Parties join him.

Akhila Krishnamurthy in Chennai provided reporting assistance for this series.