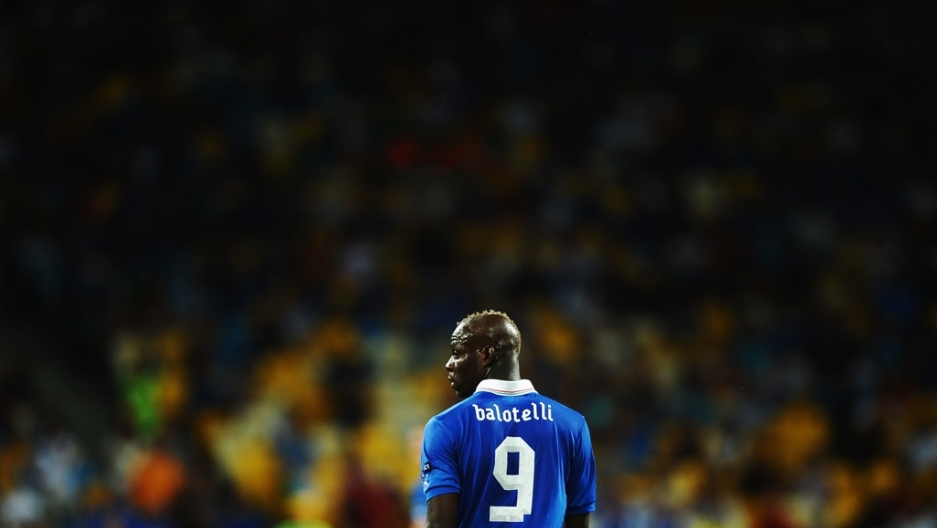 Mario Balotelli of Italy after the final match between Spain and Italy at the Olympic Stadium on July 1, 2012 in Kiev, Ukraine.
Credit: Laurence Griffiths
Share

JERUSALEM — In the end, the Italian dream didn't come true and Italy failed to beat Spain for the Euro 2012 Cup it so desired. In fact, it was a 4-0 rout.

But its star striker Mario Balotelli, a top goal earner for the tournament, has become the international standout sensation his fans always knew he could.

And, to everyone's surprise, he is Israel's newest, freshest sweetheart.

Why? Balotelli, the Sicilian-born child of Ghanaian immigrants who had to wait until he was 18 to claim Italian citizenship, is, it turns out, also something of a Jew.

"He is one of us," intoned veteran TV commentator Motti Kirschenbaum. "He won't be Mario any more. From now all, we'll all call him Meyer."

Like any other Jewish boy, Mario is Jewish via the maternal line. After a spectacular semi-final match against Germany last week, Balotelli, who was responsible for both winning goals, ran across the pitch and kissed his weeping mother, Silvia Balotelli, who was in the stands in Warsaw.

"These goals are dedicated to you, mamma," he told her that day, and exuberantly repeated in media interviews. "I waited a long time for this moment, especially as my mother is not young anymore and can’t travel far, so I had to make her happy when she came all the way here.”

The image of the sweaty, exultant, mohawk-topped player, who is black and 6'2'', kissing his mom, who is a petite, demure, traditional Italian grandma, and was weeping with emotion, went viral.

In Israel, as it became clear that Balotelli was the son of a Jewish mother, the story took on pandemic proportions.

More from GlobalPost: Security in Egypt's Sinai getting worse

On the day of the final match against Spain he graced the front pages of all national newspapers. Yedioth Acharonoth, a tabloid, had "ONE OF OURS!" and Ma'ariv, its competitor, went with "Super-Mario's Yiddische Mameh."

Israel is no soccer powerhouse, but when it comes to mom-obsessed headlines, they may hold the world cup. (Not to be shut out of the mom-fest, the Guardian's header yesterday was "Mario Balotelli: The mercurial star who's a mother's boy.")

Yes, Balotelli is known to be close to his mother. She held his hand every night to help him fall asleep. "That kiss was not easy for him," she told the Italian media at the time, "because like any 21-year old, he is embarrassed to kiss his mamma."

Balotelli's original family is known to him, but they are not close. They reached out, via the media, only when he became an international superstar. "If I hadn't become the football star Mario Balotelli, they wouldn't have cared what happened to me," Balotelli posted on his Facebook wall after the Barwahs, his birth parents, gave an interview that implied bad intentions on the part of his adoptive parents.

Following a team visit to Auschwitz, Balotelli told his teammates that his mother — the daughter of Holocaust survivors, with relatives in Israel — keeps a box of letters under her bed, and doesn't talk about it with anyone. As reports of this confession made it to the media, a neo-Nazi site posted that Balotelli "is black and Jewish, he should play for Israel not Italy."

Opposing team's fans have been known to scream "yid" of "monkey" at him while he plays, and the team manager, Cesare Prandelli, responded by saying that racism is "a social problem."

Israeli media seems to have discovered the Disney-worthy story of Balotelli's life only this week, but for those in the know, and Italian Jewish soccer fans are definitely in the know, it is a tale long in the making.

Noa Segre, a hi-tech worker in Jerusalem, has been following Balotelli since he was a teen.

"Of course, I knew," she says, with light impatience. "I'm Italian. It has been known for a long time. H'e always been attacked by racists for being black and for being a Jew, even when he played in Milan as a kid. We all know about his Jewish mother, who wouldn't let him play if he didn't study."

Lior Shabo, 35, another Jerusalem fan (though not an Italian, except through his "love of Rome and Italy") found the media circus distasteful. "What's the deal here? Suddenly, we're acting like he's ours and before that no one followed him. Now that we know he's Jewish we act like he's ours? Last week he was nothing for us. I don't like it."

Mario's sister, Cristina Balotelli, a journalist who now works as her brother's publicist, took a number of courses in a local university business school. "We are trying to locate her in every possible way," the school now says. "I'll keep you posted."