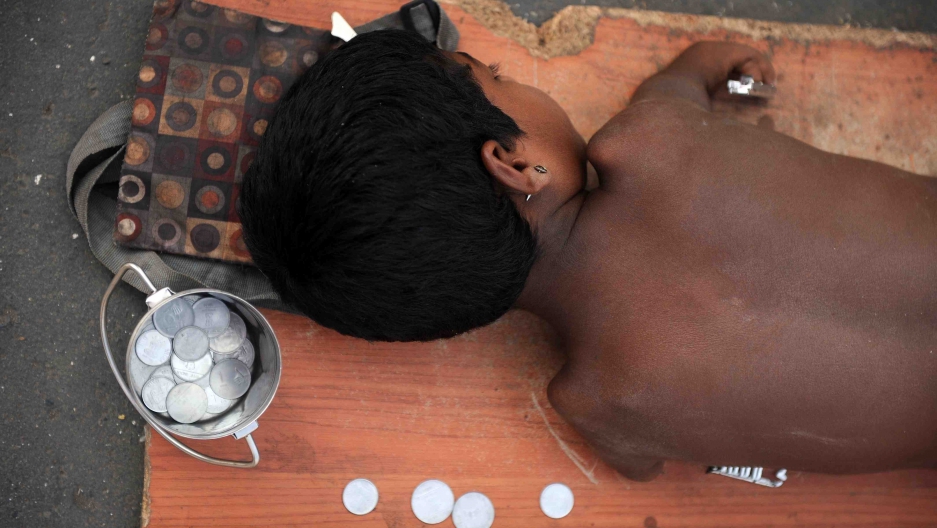 A handicapped child lies on a mat while begging for alms next to a few Indian rupee and paise coins given to him in Mumbai on December 7, 2011. Though it has plenty of problems at home, India initiated a global aid agency endowed with $15 billion for the next five years.
Credit: INDRANIL MUKHERJEE
Share

Called the Development Partnership Administration (DPA), the agency is designed to streamline and make more transparent India's growing foreign aid program, which has expanded from almost nothing a decade ago to a sizable outlay targeting more than 60 developing countries.

The DPA will have around $15 billion to spend over the next five years, India's Sunday Guardian newspaper reported. It will be headed by Ministry of External Affairs' (MEA) additional secretary P.S. Raghavan and will bring under one umbrella all agencies involved with foreign aid and development projects within the foreign ministry, the paper said.

"We do not like to call ourselves a donor," the Sunday Guardian quoted Syed Akbaruddin, joint secretary with the Ministry of External Affairs, as saying. "We call it development partnership because it is in the framework of sharing development experiences. It follows a model different from that followed in the conventional North-South economic cooperation patterns, hence the designation of Development Partnership Administration, it is administering our development partnership projects."

So far, India's foreign aid program has made major donations to Sri Lanka, Myanmar and Afghanistan, signaling that along with helping its neighbors New Delhi (like Washington and Beijing) views economic aid as an important foreign policy tool.

Too bad the bean counters still complain that there's not enough in the coffers to feed everybody in India.