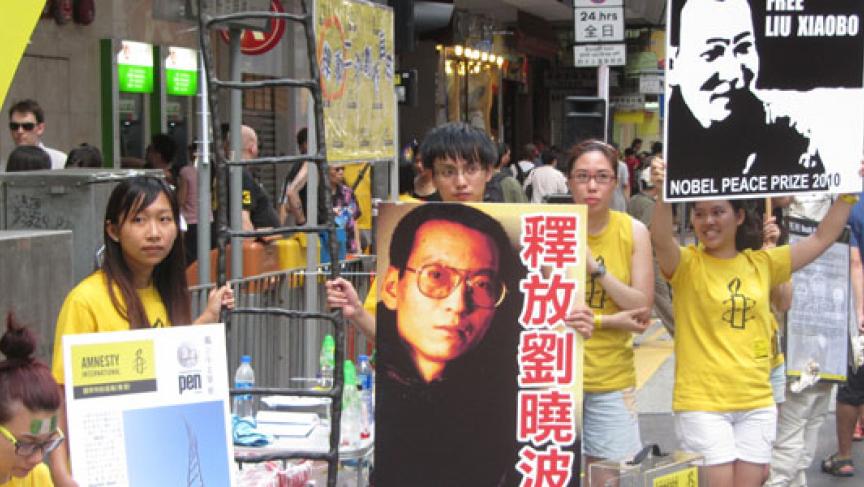 Share
In the 15 years since Hong Kong reverted from British to Chinese rule, a few things have changed, but not as the Chinese government may have wanted or predicted. A population once thought to be apolitical and commercially focused has found its protesting mojo. There were almost 1,500 separate demonstrations in Hong Kong over the past year. Sunday's was one of the biggest, and it wasn't just about Hong Kong, it was also about China. "We think as long as the one-party dictatorship remains, Hong Kong will not gain real democracy," said Eric Lai, head of the Civil Human Rights Front, which organized the rally. "Especially CY Leung is now the new Chief Executive and he is believed to be an underground Communist Party member. And it means 'One County Two Systems,' and 'Hong Kong people rule Hong Kong,' is disappearing." Lai said under the "One Country Two Systems" policy, Hong Kong was supposed to have autonomy for 50 years, even an increased degree of democracy — a prospect that interests many Chinese across the border, too. "As we know, many mainland people are watching our rally through the Internet," he said. "And some of the mainlanders came to Hong Kong weeks ago, as tourists, so they can try to join the rally. And they think that it is a peaceful rally for all the local citizens, and it is even a model for China, to promote a democratic movement." The Chinese government had stopped issuing permits for mainland Chinese to visit Hong Kong about a week ago, but some mainland Chinese were still out on the streets Sunday. One was 27-year-old James Zhang, who's from the eastern province of Zhejiang but now works in the finance sector in Hong Kong. I asked what he makes of the fact that tens of thousands of Hong Kong protesters can take to the streets peacefully, but that the Chinese government fears what would happen if it allowed the same thing to happen on the mainland. Zhang said the people in Hong Kong have long been exposed to different opinions, so they wouldn't be prone to aggressive behavior, but in mainland China, they might be different. "But if it did happen in mainland China, it wouldn't have much effect," he said. "It wouldn't change government policies." Chinese government policies, in the lead-up to a once-a-decade leadership transition this autumn, have been to tighten up on the press, the Internet, free speech, and any perceived challenges to its rule. One came about a month ago, from a former Tiananmen pro-democracy protester, Li Wangyang, who spent 22 years in prison, gave a defiant interview to Hong Kong cable television. Wangyang talked about being tortured, shackled, kept in solitary confinement, but still reinforced the need "to speed up the democratization of China." "I won't retreat even if I'm beheaded," he said. Days later, he was found dead in the hospital where he was being treated, with his neck wrapped tightly to a pole with a bandage, his feet on the ground. The death hit Hong Kongers hard. They jeered at the Chinese government's initial claim of suicide, which was later retracted and called an accident. Many of this weekend's demonstrators cited the Wangyang case as one reason why they came out. "I want to know what really happened to Li Wangyang," said 16-year-old protester Stone Chen. "The Chinese government should tell us." One hundred thousand other Hong Kongers signed a petition asking for a transparent investigation. Popular blogger Bei Feng said when he called online for a full investigation into Wangyang's death, Chinese police contacted his parents, and said they should warn their son not to do anything controversial in Hong Kong, because he still has family in mainland China. "I found it unbelievable and unreasonable because I was just trying to demand the truth of the death of Wangyang," he said. "I did everything legally in Hong Kong, and I will continue to do it, with no fear. I need to (keep going), because I need to show them that their threat is useless, to avoid them threatening my family again." Many Hong Kongers this weekend seemed determined to show they weren't about to be cowed, not by China's leaders, not by their new Chief Executive. As China's leaders try to import their political culture to Hong Kong, Hong Kongers are finding ever more reason to push back. They have another 35 years before their relative autonomy under One Country, Two Systems is supposed to come to an end and it is looking unlikely they'll go quietly, even then.