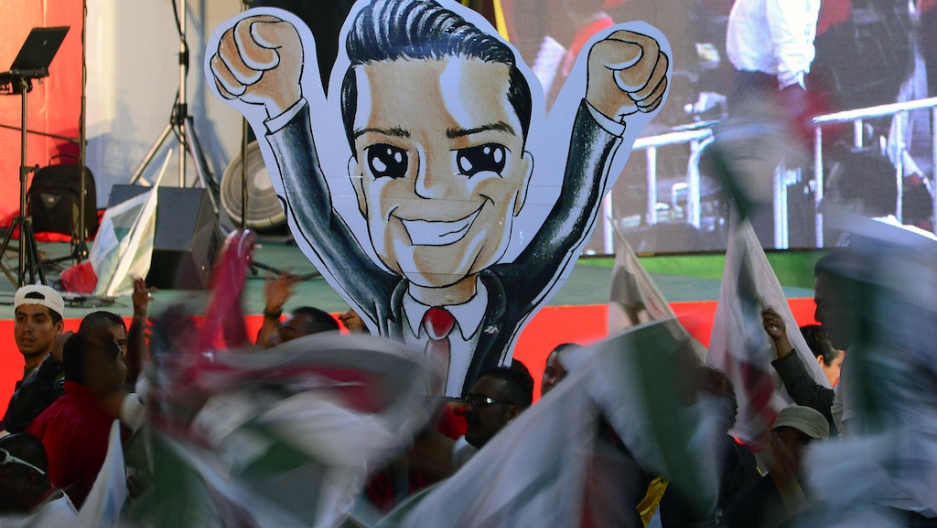 Pena Nieto of the center-left Institutional Revolutionary Party, or PRI, which ruled Mexico for most of the 20th century, won more than 38 percent of the vote.

He finished well ahead of his two main rivals: Andres Manuel Lopez Obrador of the left-wing Democratic Revolution Party, who got more than 31 percent of the vote, and Josefina Vazquez Mota of sitting President Felipe Calderon’s National Action Party, who received just over 26 percent.

"The Mexicans have spoken and they are clear. Thank you, Mexico," Pena Nieto said in a conciliatory speech in which he emphasized he would continue the fight against organized crime.

Pena Nieto was the red-hot favorite going into Sunday’s poll after voter surveys consistently showed the youthful-looking PRI candidate well ahead of the other candidates.

President Calderon handed the reins to Pena Nieto in a speech broadcast live on television shortly after the results were announced around midnight (EST).

Exit polls had given Pena Nieto a comfortable lead of between eight and 11 percentage points over Lopez Obrador, who lost the 2006 election by a razor-thin margin amid allegations of vote-rigging.

The silver-haired presidential hopeful, often referred to by his initials AMLO, told his supporters he would wait for the entire results to be announced later this week before declaring his position.

During its time in power, the PRI became a symbol for corruption, repression, economic mismanagement and electoral fraud, and many educated Mexicans and urban dwellers are now worried the country could return to that grim period of the country's history.

“We don’t like the PRI, it is like going back to the past, the poorest past of Mexico,” Concepcion Garcia told GlobalPost after voting at a primary school in Guadalajara, Mexico’s second-largest city in the central state of Jalisco.

“If the PRI is in power, we are afraid there will be no more democracy in this country.”

Yet many Mexicans credit the party with keeping drug cartel violence at bay during its rule — something the incumbent President Calderon has not achieved.

The Federal Electoral Institute said 60 percent of the nearly 80 million Mexicans eligible to vote participated in the election — the biggest voter turnout in Mexican history.

Authorities, worried that voter turn out could be lower this year than previous elections, had pulled out all stops to get as many of people as possible to polling stations.

The institute had plied the airwaves with advertisements urging Mexicans to lodge their vote.

Some businesses got on board, offering freebies, two-for-one deals and discounts for customers who could prove they had cast their vote in the elections for president, deputies, senators, governors and mayors.