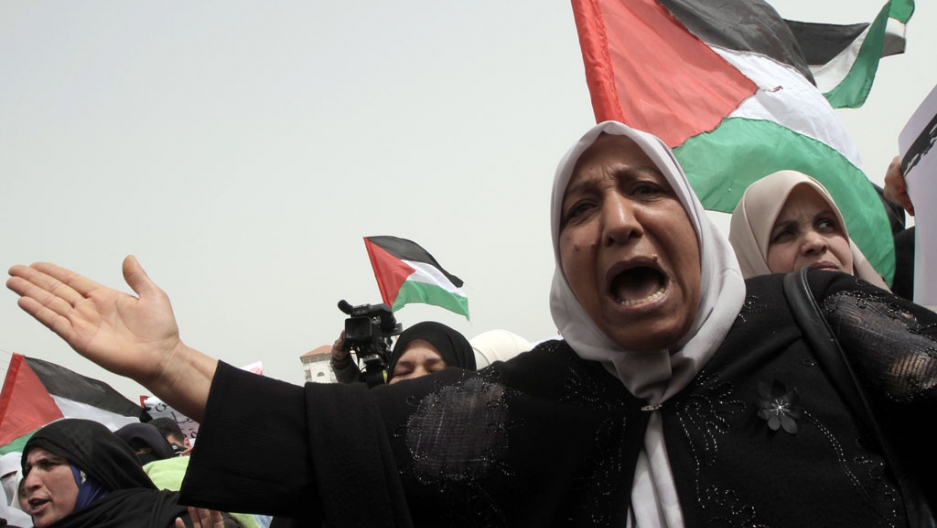 Palestinian women wave their national flag and shout slogans during a protest near the Rafah border crossing with Egypt in the southern Gaza Strip on March 20, 2012.
Credit: SAID KHATIB
Share

RAFAH, Egypt — Insecurity and armed attacks on police and army are on the rise in Egypt’s North Sinai, a restive flashpoint region that shares borders with both Israel and the Gaza Strip.

Earlier this month, armed men shot dead an Israeli construction worker on the Sinai-Egypt border. In May, a rocket-propelled grenade attack by masked gunmen on an army checkpoint in North Sinai left two soldiers injured, according to local media. Bedouin in North Sinai told GlobalPost the two soldiers were actually killed.

A single joint army-police checkpoint in Rafah, which straddles the Egypt-Gaza border, has been attacked more than 20 times — both by armed Bedouin and a growing cadre hardline Islamists — since the ouster of Hosni Mubarak last year, Egypt’s interior ministry says.

According to the Egyptian Initiative for Personal Rights, which monitors security incidents in Sinai and across the country, the desert territory has seen the highest number of attacks by citizens and militants on security forces this year.

“The trend in North Sinai is continued armed confrontations with police,” said Karim Medhat Ennarah, the organization's security sector researcher. “Most [of the attackers] are Bedouin frustrated by the state and by security tactics. The police are bearing the brunt of any kind of economic and social policy [there]."

Economically and socially neglected by the Egyptian government since the Sinai Peninsula was returned to Egypt under its peace treaty with Israel in 1982, North Sinai Bedouin — with a culture and dialect distinct from mainland Egypt — have in recent years turned to black-market activities to make a living.

Many of the young men here traffic drugs or people into Israel, and run smuggling rackets of weapons and construction goods into Gaza, which has sine 2007 suffered behind a crippling economic blockade.

The lack of development, poor infrastructure, and historic political marginalization of the Bedouin, whom make-up roughly half of the population of about 340,000, are all feeding the unrest here.

Hamdy Mohamed Ismail, the head of the Muslim Brotherhood’s political arm in Ismailia, a province with territory in both North Sinai and mainland Egypt, said both Mohammed Morsi, Egypt's newly-elected president, and the party have made Sinai investment, particularly in the farming sector, one of their top economic priorities.

But Morsi, whose powers were clipped by Egypt’s ruling generals just days before the presidential election run-offs earlier this month, cannot appoint a defense or interior minister — and will likely have little if any control over security policy in Sinai. As a result, some here worry the situation will only get worse, threatening to disturb the relative peace that has existed in the region, and especially between Egypt and Israel, for the last three decades.

After protesters — many of them armed Bedouin tribesmen, traditionally excluded from joining the security forces — routed police and intelligence agents from their posts in North Sinai during the popular uprising that toppled Mubarak last year, Egypt’s ruling army deployed additional troops to help boost security and curb growing militancy.

But in June, not a single policeman patrolled the streets of Rafah. Instead, Central Security Forces — Egypt’s riot police — were holed up in heavily-guarded barracks encircled by barbed wire on the outskirts of the town.

More from GlobalPost: Muslim Brotherhood is down, but is it out?

Armored military vehicles now escort the riot police from their garrisons to army-enforced checkpoints on the area’s main, 30-mile highway.

“It’s impossible for the police to come back in the same way they were,” said Abu Ashraf, a Bedouin elder of one of the area’s strongest clans, and informal political representative for the disaffected tribesmen.

His friends and extended family jokingly call him the “Che Guevara of Sinai,” for his role in mobilizing protests during the 18-day uprising.

“If they come back and nothing has changed,” Abu Ashraf said. “We will do something bigger than revolution.

”On the windy, unpaved roads that splinter off from the thoroughfare running east from Arish to the Gaza border at Rafah, even the checkpoints run by the well-equipped military disappear.

“Do you see this soldier?” said 27-year-old Mohamed, pointing, as he turned his Mercedes onto a checkpoint-free road, to the last military troop posted atop a sandbagged tank on the outskirts on Al-Arish.

The fresh-faced soldier was reading under a blue-and-pink flowered parasol.“How can he fight a war?” Mohamed asked. “Nothing has changed here in 30 years. Anything that has happened in Sinai is because of the people. Not because of the government.”