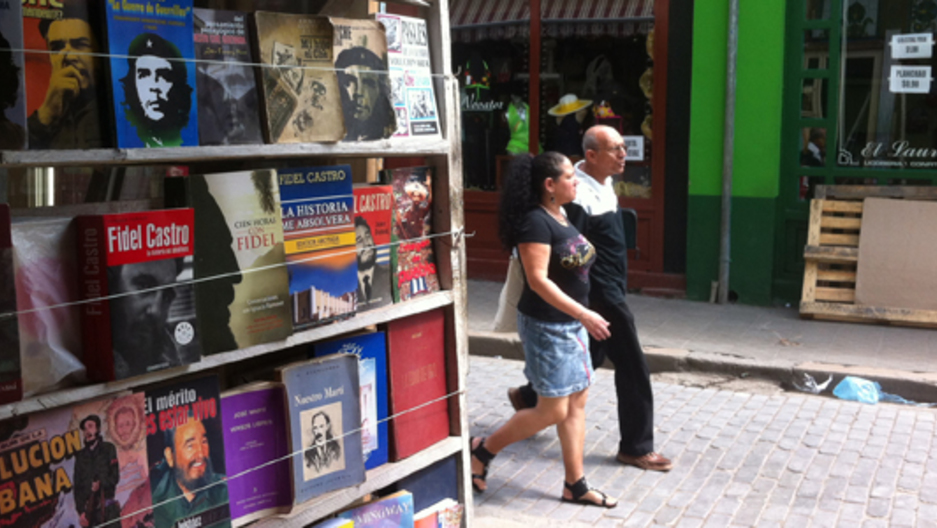 Share
With travel restrictions easing, more Americans can go and see Cuba themselves. And for those who do venture to Havana and its colonial downtown, there is a good chance they will spot the Plaza de Armas, a leafy square with restaurants, musicians–and booksellers, peddling mostly second-hand reads on everything from Cuban ballerinas, Hemingway and Russian-Spanish dictionaries. But one bookseller, Juan Carlos Torres, explains what dominates here. "Politics," he said. "That's what sells most. That's the priority." He points to the book "100 Hours with Fidel," a marathon interview with Castro. There is Ernesto "Che" Guevara's Bolivian diary, books on Cuban-CIA history and poetry by Cuba's José Martí. This is part of Cuba's state-controlled book world. There are no independent bookshops. Foreign magazines are banned. Books are curated by the government and generally don't test the Communist line. No exiled Cuban writers or Latin American giants like Mario Vargas Llosa and Carlos Fuentes. But there is a flip side: a small literary underground, led by defiant Cubans with private libraries and books swapped on flash drives. Meet the couple Miriam Leiva and Oscar Espinosa, both former government officials who split from the regime–and became internal dissidents. Their cramped Havana apartment is stuffed with books, from Spanish versions of bestsellers like Thomas Friedman's "The World is Flat" and Barack Obama's autobiographies to literature on post-Cold War Europe. "They're books that in Cuba don't circulate, that we've acquired because friends have brought them," said Leiva. The couple, both in their 70s, have also rebuilt their library since 2003. That's when Espinosa, who once advised Fidel Castro, was arrested for his critiques of the government. "They arrived that night with a ton of boxes and started going through and tossing away books," he said. "But I have friends, a lot of friends abroad and here in Cuba." Friends who continue bringing him books–faster than the Cuban government can take them away. Espinosa shows a favorite: "The Feast of the Goat" by Nobel Prize winner Vargas Llosa. It's a brutal portrait of Rafael Trujillo, the Dominican Republic's former dictator. "Vargas Llosa is a blacklisted writer according to the Cuban government, along with other famous writers in the world," he said. Espinosa's own book called "Cuba: Revolution or Regression?" is banned here. A friend from Spain sneaked in a copy. In another part of Havana, Gisela Delgado, a computer technician, runs a private library from her small apartment. In 2003, the government cracked down and jailed 75 of the island's dissidents, including independent librarians. Delgado was spared, but remains monitored. This year, when foreign correspondents flocked to Cuba for the Pope's visit, her phones stopped working. For the government, the sore spot is how books get here: through foreigners, from exiled Cubans, sympathetic diplomats. And what the Cuban government deems inappropriate is arbitrary. When state police raided her library during the 2003 dissident crackdown, Delgado remembers asking agents how a book by Gabriel García Márquez could be confiscated. "They said, 'The problem isn't the title of the book. It's you,'" she recalled. That's right, said Rafael Hernández, a political scientist in Havana and government-employed magazine publisher. "It's not about all the books they have," he said. "I think this is a part of a political opposition operation. That's it." Hernández, a favored intellectual by the Cuban government, read many of the books unavailable in Cuba when he was a visiting scholar at Harvard. The problem is that these book collections are here in Cuba, breaking rules against material that could jeopardize the Revolution. Hernández also avoids words like "censorship" or "banned." Instead, he insists the real problem is the US embargo, which complicates Cuban publishers' ability to export books. "Cuban publishing houses would like to have more titles," he said. "The main problem is the money." Delgado, the librarian, does not buy that. Money will not put books critical of the Cuban government on the shelves, she said. At issue is what her books surely symbolize: a thorn in the government's side, dissent–and support from the outside world.