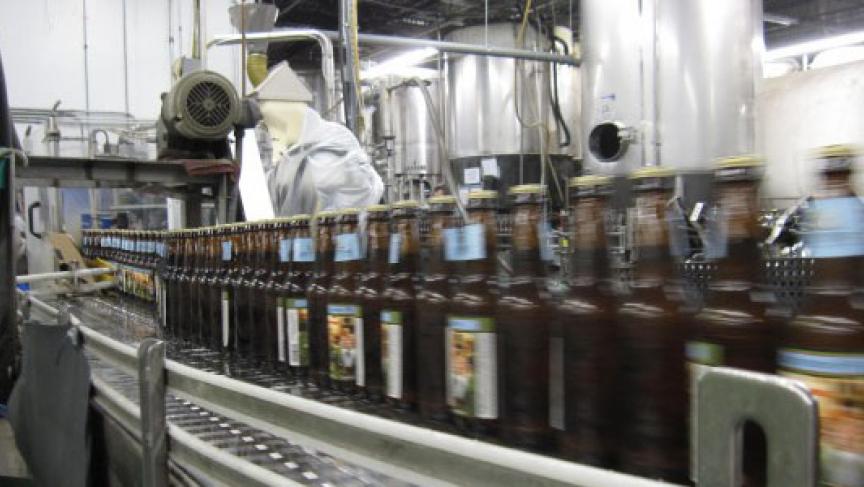 The Smuttynose Brewing Co. in Portsmouth, NH is a tiny brewer by national standard, but Europeans are discovering their beers, part of a growing trend of American craft brewers exporting their product. (Photo by JT Thompson.)

Sales of American craft beer — beers from small, independent brewers — are exploding in Europe, up 52 percent last year according to the trade group the Brewers Association.

The biggest demand is coming from Sweden and the United Kingdom.

Smuttynose beer is among the American craft beers shipping its bottles overseas. That’s pretty impressive, considering the brewery in Portsmouth, N.H., is about the size of a high school gym.

“This is the Laverne and Shirley portion of the tour. We have a bottling line, we have a crew of about eight guys on the line,” said JT Thompson, as he shows off the brewery.

A couple of the guys were actually manually putting cardboard six pack holders in boxes.

Smuttynose’s biggest seller is its India Pale Ale — a bold brew rich in hops. Thompson said American craft beers are firmly grounded in European traditions from Belgium, Germany and the United Kingdom. But with an American twist.

“I think what makes them distinctly American, and I think this is an inherent part of our national character, is we’ll take something and make it bigger or more bold or more robust," he said. "And that’s exactly what we’ve done as American craft brewers. So, we’ve really been able to draw from a lot of different traditions and sort of reconstitute them or reinvent them to create our own stamp in the brewing world.”

American craft brewers are adding things like spices, fruits, and chocolate flavors to their beer as well.

Smuttynose is currently sold in only 19 eastern U.S. states and the District of Columbia. And yet, there’s also been some modest demand in parts of Western Europe. Smuttynose wins its share of awards and recognitions, and Thompson said beer lovers, the world over, know the score.

“I read a couple of years ago that beer is the second-most popular hobby on the Internet after pornography," he said. "Through that, there’s such a free exchange of information, it’s not hard to get little subcultures of awareness of what we’re doing here in America.”

That’s happening in Sweden. That country is the second biggest importer of American craft beers, only behind Canada. One of those beer-loving Swedish Internet researchers is Jörgen Hasselqvist. He owns a bar in Stockholm called Oliver Twist, which specializes in American craft beers. He said American brewmasters changed the way that he and other Swedes look at beer.

“We’ve been basically drinking the same thing over here for a long, long time. And all of a sudden we’ve got this selection of really flavourful beers with character and something different," Hasselqvist said.

Hasselqvist said the Swedes don’t have as stong of a brewing tradition compared with, say, the Germans or the Belgians. So the Swedes were more open to American imports.

“People just realized immediately on the first sip that these guys can actually brew some fantastic beers," he said.

Still, the Swedes are way out in front when it comes to embracing American craft beers. American beer sales in Europe are still dominated by the big brands: Budweiser, Bud Light, Coors and Miller.

“Mass-produced, mass-marketed, fairly light, highly carbonated, which are fine for what they are," he said. They’re like McDonald’s, and Burger King and Taco Bell, and we’ve all had some of that.”

But Koch wants more European beer lovers to give his bottle a try.

If Budweiser is the King of Beers, Sam Adams is the king of American craft beers. Some of the speciality beers at his Boston brewery have been aging for 20 years. The long-aged brand is called “Utopias” and sells for $200 a bottle.

He said the Swedes were the first Europeans to embrace his beer style. But he says Europeans elsewhere are also slowly changing their impressions of American beer.

“Very similarly to what happened with wines,” said Koch. “It wasn’t until the famous Judgment of Paris in 1976 when some of the small craft winemakers, if you will, in the U.S. sent their wines to a blind tasting against some of the great vintages of Europe and in fact won most of the categories.”

Two years ago, that moment arrived for American craft beers at Octoberfest in Munich.

“And they announced the gold medal for the best Octoberfest in the world went to — gasp — Samuel Adams’ Octoberfest. The air went out of the room,” Koch said.

That’s not just Koch patting himself on the back, Hasselqvist said.

“For Sam Adams to win that in Germany, I mean that’s just mind blowing. And if the beer was that good it deserved to win," he added.

Hasselqvist said the Germans have been doing beer the same way since the 16th century. And maybe they also could use a bit of change.