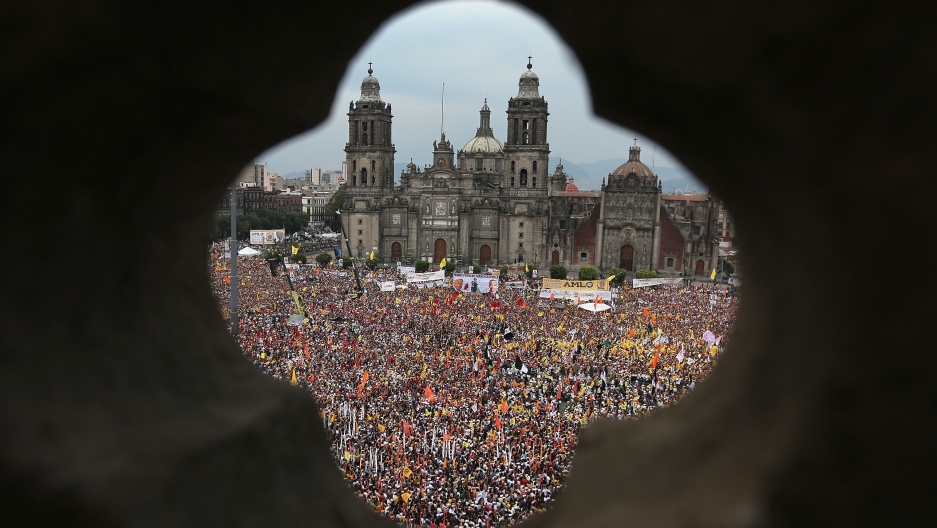 Taking a closer look, Mexico's July 1 election will not strain American ties as much as some are claiming. Even the leftist candidate, whose June 27 campaign rally is seen here, refrains from attacking Mexico's trade and counternarcotics partner to the north.
Credit: John Moore
Share

Something remarkable happened, or rather, didn’t happen, in the middle of Mexico’s June 10 presidential debate when the three leading candidates were asked to share their views on foreign policy.

Not a single one — not even leftist Andres Manuel Lopez Obrador — used the opportunity to question the two pillars of the US-Mexico relationship: free trade and the shared fight against Mexico’s drug cartels.

With the National Action Party (PAN) of current President Felipe Calderon struggling in the polls, many have concluded that Calderon’s embrace of US policy prescriptions —especially his all-out military campaign against the cartels — will likely cost PAN the presidency when Mexicans choose a new leader on Sunday.

But Mexico’s candidates running on promises of “change” appear to be offering a change of personalities, not a change of foreign policy.

If anything, Mexico's three leading candidates are calling for even closer ties to the United States. While US lawmakers have raised fears in recent weeks that a new Mexican administration could waver in the drug war fight, there’s little likelihood of that happening.

Mexico needs US markets and US security aid just as much as the US needs a stable southern neighbor.

“We need more than NAFTA,” said Institutional Revolutionary Party (PRI) candidate Enrique Peña Nieto, the race’s front-runner, during the debate, in reference to the North American Free Trade Agreement. “We’re neighbors with the US, but we’re not doing enough.”

The Mexican campaign cycle has been a reminder that Mexico is not Venezuela, or even Miami, where politics tend to be driven by ideology. If anything, Sunday’s elections appear to be more about who can make the Mexican state function, not what sort of functions the state should perform.

Calderon, ineligible for re-election, is nearing the end of a six-year term in which almost two-thirds of Mexicans said in a recent poll that their personal lives have improved or stayed the same. But, somewhat paradoxically, 59 percent also think the country is moving in the wrong direction.

Mexican voters seem to want a government that can administer the country effectively, make much-needed reforms and provide basic security and welfare.

The candidates are not running on an anti-American platform or offering a Hugo Chavez-style tilt toward socialism, even though roughly 45 percent of Mexicans are living in poverty.

“I don’t know Hugo Chavez, the president of Venezuela, and I’ve never even spoken to him by telephone,” said Lopez Obrador, the candidate of the Revolutionary Democratic Party (PRD). Lopez Obrador, who narrowly lost Mexico’s last election, is in second place behind Peña Nieto, whom he trails by 10 to 15 points in most polls.

Though NAFTA remains a bad word among some activists and union supporters, particularly in the United States, it has not been a point of controversy in Mexico’s 2012 race. Bilateral commerce between the United States and its neighbor to the south is at an all-time high, nearing $500 billion a year, and more than two-thirds of Mexican exports go to the United States, according to Bank of Mexico data.

Americans get more flat-screen televisions and imported beer from Mexico than any other country. Mexico is the US’ second-largest source of foreign cars and foreign oil (after Canada).

The trade imbalance between the two countries has tilted in Mexico’s favor by more than $100 billion a year — another reason none of the candidates is talking about protectionism or backing out of NAFTA.

The drug war partnership isn’t likely to fade either. On the campaign trail, Peña Nieto, the former governor of Mexico state, has told Mexicans he will shift his security policies to a focus on “reducing violence,” rather than stopping the flow of drugs.

Since Mexicans — with good reason — see the appetite for illegal narcotics in the United States as essentially unchanged, they’re not as bothered by traditional traffickers who run dope north while leaving the local civilian population alone.

But gruesome violence and the terrifying wave of kidnappings, carjackings and beheadings that have preyed upon ordinary Mexicans has left many desperate for a leader who can restore order and subdue the gangsters.

In that sense, Peña Nieto’s pledge to "reduce violence” is more of a semantic trick than a new policy course. The drug cartels are generating the crime, and there’s little sign that Mexicans want a pullback from the current government’s military strategy.

A new poll by the Pew Global Attitudes Project shows that 80 percent of Mexicans support the use of the country’s armed forces against the traffickers, even if fewer than half of respondents think the strategy has worked so far. (See charts below.)

Other surveys have indicated that more than half of Mexicans also approve of a wider US role in the fight — everything short of American troops on Mexican soil.

Peña Nieto’s recent announcement that he has hired top Colombian cartel-fighter Gen. Oscar Naranajo to be his security adviser also sends a signal that he’s unlikely to depart from the course charted by Calderon. Naranjo is known for his close collaboration with US counter-narcotics officials and maintains excellent ties in Washington.