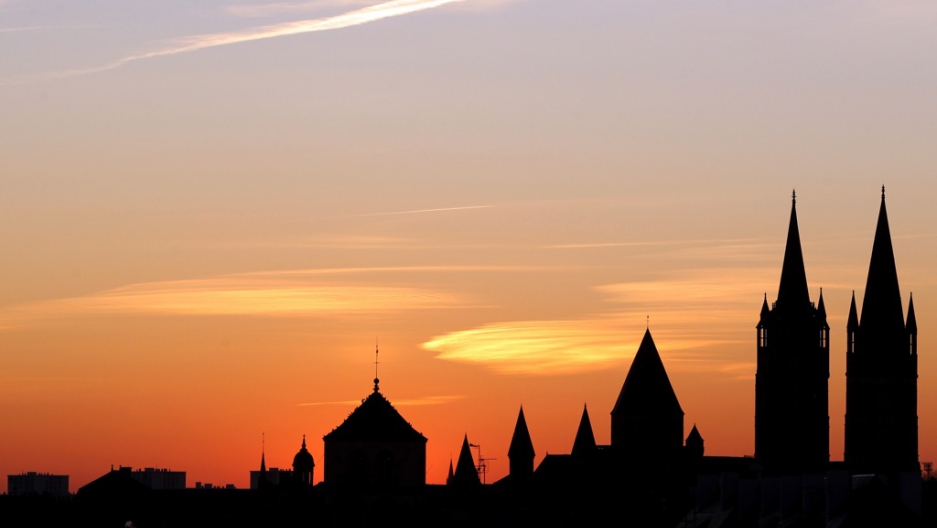 Unlike established churches, like the Saint-Etienne de Caen parish pictured above in the French city of Caen, many immigrants in France are struggling to find a place to worship, congregating in cellars, warehouses and even abandoned factories.
Credit: KENZO TRIBOUILLARD
Share

PARIS, France – For a decade he battled local authorities, but finally Pastor Luc Saint-Louis opened his church, in a disused supermarket.

Saint-Louis skips across the stage, at his Centre Missionaire Evangélique Church near Paris. About 200 hundreds followers, most of them from the French Haitian community, chant and pray, arms swaying, under the crisp neon lighting.

The followers bitterly recall their fight to open a church in France. They say neighbours in a nearby town Montreuil, where the congregation rented premises, forced them to leave.

“The mayor and the neighbors never stopped harassing us, they wanted us to stop playing music, so we did, but it wasn’t enough,” says Saint-Louis. “They asked us to stop singing, and that was simply unacceptable for us.”

“Sometimes the police disrupted our services,” says follower and student Edy Duram. “They wouldn’t enter the church, but the pastor had to stop and go speak to them.”

Several times, the congregation was taken to court over noise nuisance on Sunday mornings. But Saint-Louis, who is also the founder of the Union of Haitian and Afro-Caribbean Evangelical Churches in France, thinks the noise was an excuse.

“What noise? We had stopped playing our instruments!” says Saint-Louis, “We disturbed the neighbourhood because we are coloured people. That was our feeling.”

Saint-Louis says he gave up on settling in Montreuil and last year found a new place of worship in the town of Le Blanc-Mesnil, in the outskirts of Paris.

“Those are big lies. And for a religious man, that’s a sin. He should always say the truth,” says Brard. He insists Saint-Louis’s church did not have a permit, and that he intervened once during a service to make sure the premises were safe.

In Paris, poverty, high property prices and difficult relations with the authorities mean that growing evangelical communities often congregate in unhealthy or unsecure facilities. These “cellar evangelicals,” as they are referred to in the French press, invest in cellars, warehouses, and even abandoned factories to worship.

More from GlobalPost: The new face of France's far right

“It happens, but in most cases evangelical churches enjoy positive relations with their neighbours,” says CNEF vice-president Daniel Liechti.

“But we call on the authorities and stop making life so difficult for evangelicals, you’re pushing them to set up illegal churches,” says Liechti who wants local councils to lend evangelicals public buildings so that they can meet until they find proper facilities.

“Some mayors appear more willing to lend Muslims premises. They should be as generous with evangelicals,” says Liechti.

The issue of illegal evangelical churches hit the headlines in March, when an ad-hoc church collapsed, killing two worshippers, including a six-year-old girl, in the town of Stains near Paris.

While many evangelicals blame mayors who are reluctant to see new churches open in their towns, some are shifting the blame onto pastors who don’t respect safety rules.

“Pastors squabble. Sometimes congregations split up because a pastor wants to set up their own church and rushes into premises that are in dire condition,” says student Edy Duram who hopes aspiring pastors will be more careful in the future.

Liechti estimates there are about 200 illegal churches in the Paris region, but admits it’s difficult to keep count.

The number of evangelicals in France has grown by ten-fold since World War II, to at least 460,000, according to a 2010 survey by the IFO Institute. So the quest for space in France is only going to get more difficult.

“The growth has been quite stunning in France,” says Raphael Anzenberger, secretary general of France Evangelism, adding that the growth exceeds that in other European countries.

“We’ve had some catching up to do,” he says. For centuries, Protestants suffered from discrimination in Spain, Italy and France, Anzenberger insists growth has been strongest in France because the evangelicals are more organised than elsewhere.

More from GlobalPost: Can this woman save the French economy

In recent decades, France has also seen a shift in immigration, with more and more immigrants coming from Christian countries in Africa, where evangelicalism is strong. In 2008, France welcomed over 670,000 migrants from sub-Saharan Africa according to the French statistics agency INSEE.

The CNEF estimates that 15 percent of its churches were founded by immigrants from Africa and Asia. This dynamism has not always been welcomed with open arms – even among evangelical circles.

Indeed, Liechti condemns self-proclaimed pastors who open new ad-hoc churches and give evangelicalism a bad name. “French pastors receive training for years, so we are not very happy when pastors pop up from Africa, don’t have any training, ignore safety regulations and open churches. They shouldn’t be allowed to do that.”

French evangelicals admit they are worried about issues of security and abuse in marginal, illegal churches.

East of Paris, a self-proclaimed pastor from the Democratic Republic of Congo founded a Church called the “Church of the Good News Winners.” He required followers to give him 10 percent of their earnings. In January, he was condemned to serve an 18-year prison sentence for murdering a follower and medical student.

The followers of the Centre Missionaire Evangélique in Le Blanc-Mesnil don’t like the attention such incidents bring them. They fear that after the collapse of a recent church, French towns will be even more reluctant to welcome evangelicals.

“I think it will be harder now to find places to worship,” says Catherine Guerrier, a 19-year-old evangelical, who works as a hairdressing apprentice, “Nobody will want to rent to us anymore, they’ll think we’ll disturb the neighbourhood or make a lot of noise.”

Indeed, it already appears mayors are waking up to the possible dangers of spontaneous evangelical gatherings.

In the town of Colombes, near Paris, local authorities last month closed an ad-hoc church that used to gather in derelict housing.

The mayor Philippe Sarre declined an interview but told French daily Le Parisien that the church was unsafe.

“After what happened in Stains, I had to do something,” he said, “Some 150 people pray in facilities meant for 20. A minor incident and the whole building could burst into flames.”

Saint-Louis thinks immigrant pastors will now need the backing of larger bodies representing evangelical interests such as the CNEF to manage relations with officials.

However, Sebastien Fath, a researcher and Protestantism expert, thinks local officials are realizing they should help evangelicals to prevent fatal accidents.

“I think there is a realisation something needs to be done,” says Fath, “Only time will tell but this is the first time these new African churches are attracting such attention in France.”