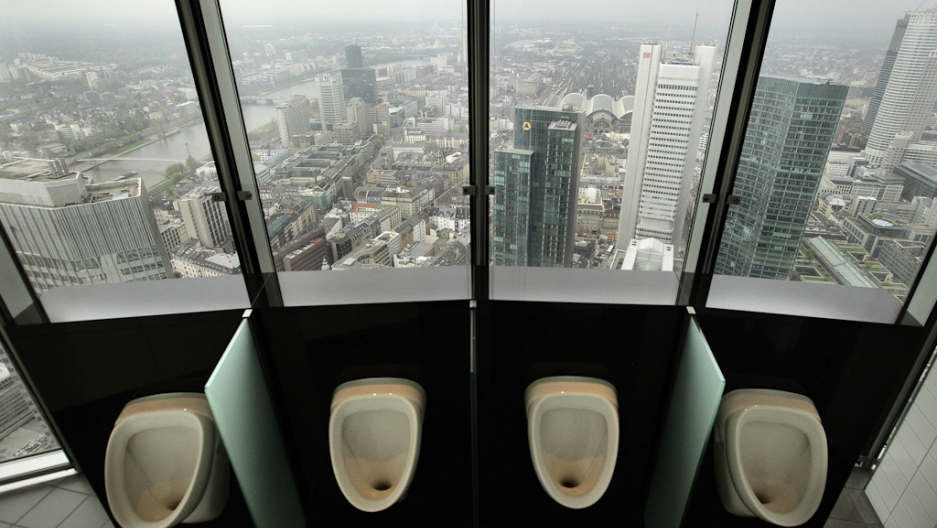 View over the city out of the restroom at the board floor of Germany's Commerzbank in downtown Frankfurt. April 6, 2011.
Credit: Kai Pfaffenbach
Share

Before getting behind the wheel after a night at the bar, you might want to listen to your urinal.

Officials in Michigan are deploying 400 talking urinal cakes to 200 restaurants and watering holes across the state as part of a stepped up anti-drunk driving campaign for the Fourth of July, the Detroit News reported.

Once "activated," a recorded message will play reminding men who step up to the urinal to call a cab or a friend, if needed, to get home safely, according to The Associated Press.

The Crownsville, Md.-based company at the center of the campaign, Healthquest Technologies Inc., has named their motion-activated deodorizing cakes Wizmark "Interactive Urinal Communicators."

Wizmarks can "talk, sing or flash a string of lights" to greet their visitors, according to the company's website.

"There are many places you can put your ad, but most of them don't guarantee three seconds of attention, let alone a consumer's undivided attention," the company states on its website.

Talking urinal cakes have been used in other states for similar anti-drunk driving efforts, the AP reported.