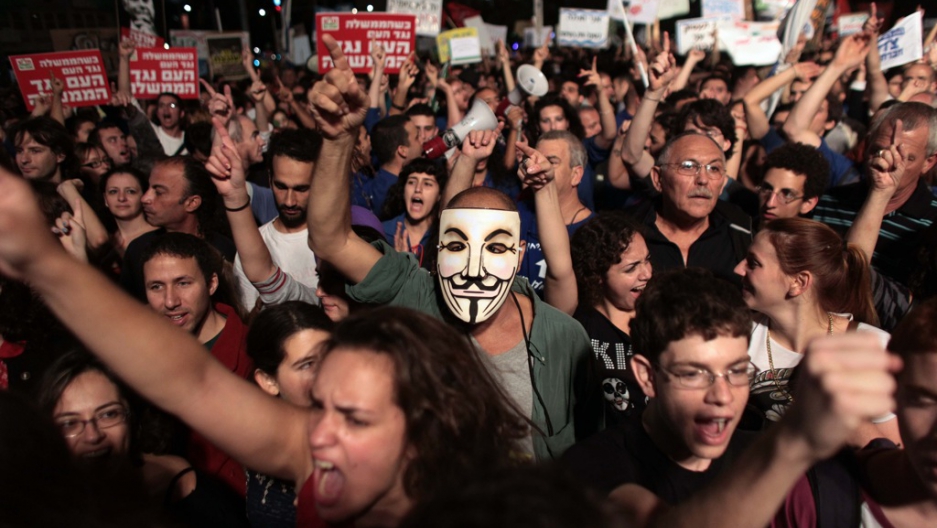 The vigorously renewed Israeli social protest movement, which looks and feels very much like last year’s Occupy protests in the United States, has marred what is normally a highlight of early summertime, in which galleries remain open all night and writers discuss their works in cafés, turning it into a Black Night boycotted by numerous artists.

Talk about kicking it up a notch: defying almost universal predictions that the movement, which will be one year old on July 14, was destined for nothing more significant than nostalgic remembrances, it has instead developed fresh force and a defiant new face in the past few days.

The upcoming weekend promises to be hot: mass rallies are being planned for every city on Saturday night, and if political reactions are any indication, mass participation is expected.

It all started with a tent.

Last summer, Daphni Leef, a young Tel Aviv student, found herself priced out of the rental market, and as an expression of frustration and remonstrance she pitched a tent in the middle of Rothschild Boulevard, a leafy street lined by apartments in which she could not even dream to live.

More from GlobalPost: Israel to shift tax burden to the rich and corporations

That modest beginning eventually drew more than a million Israelis to the streets to protest social injustice, unfair pricing practices, a growing income gap, the lack of free early childhood education and, of course, to demand tenants' rights.

Last Friday, Leef, a petite blonde, decided to kick off this year's activities by pitching another tent on Rothschild. She was part of an LGBT group that had a police permit to demonstrate. But somehow, no one quite knows how, she was violently arrested by an elite unit of the police.

Come morning, Israeli's social networks were plastered with images of Leef being dragged roughly away by two burly officers.

The next night, a gathering of a few hundred turned into a massive rally of several thousand and, for the first time, saw acts of violence and major civil disobedience perpetrated by demonstrators. Between 6,000 and 9,000 people marched to Tel Aviv's City Hall, a few angry participants smashing the glass façade of a bank. Several hundred people squatted at a major highway exit, blocking traffic in and out of the city.

Police arrested Atay Kozlovski, 23, a full-time activist, alongside Leef on Friday night. He was released within hours, uncharged. He laughingly said the police accused him of throwing rocks in their direction until their own cameras showed he did no such thing.

Last weekend’s rally, he said, was "an amazing turn of events, a completely electrifying night, with everyone screaming and chanting and holding hands."

The violent participants, he said, were very few, and unrepresentative. "I don't think that violent actions can bring change."

The police, on the other hand, were accused of systematic abuse. Close to 100 protesters were arrested. Film quickly posted online showed police kicking demonstrators adjacent to City Hall and others dragged away by their hair.

A Tel Aviv district judge summarily released the last 15 detainees, telling police they never should have been arrested. "These are young people with no criminal background," he said. "They should not be here."

Police maintain that last Saturday’s rally, for which no permit was issued, was demonstrably against the law. Demonstrators insist that unlike last year, the police are now methodically refusing to issue permits allowing them to rally.

"Our demonstrations are now actions to reclaim our democratic right to protest," said Stav Shaffir, a nationally recognized leader of the movement. "The police are steadily withholding permissions as a matter of policy."

She underscored, however, that she has nothing against the police. "They are just following orders issued by the government, that knows it has failed in its task of reforming the economy and securing basic social rights. This is clearly the work of the government.”

"The police acted stupidly," she added. "They were violent. They are afraid. They know we are all good kids and not criminals. They seem to think that if they hit us hard once, hit the protests hard, maybe they'll be able to silence us forever."

Both Minister of Internal Security Yitzhak Aharonovich and Police Spokesman Micky Rosenfeld deny there has been any change in policy regarding the issuance of permits for mass gatherings.

Whatever the case, the demonstrators seem to have won the battle over Israeli hearts.

The front page of Ha'aretz, an Israeli daily, was dominated by a massive boldface headline on Tuesday stating, "Vast Majority of Israelis Support Renewal of Social Protest."

On Monday night, activists participated in a meeting of the City Council in which, for the first time, a non-confidence motion was presented against the generally popular mayor. By the session's end, Hulda'i had lost a significant coalition partner, the left-wing Meretz party.

"He was never on our side," Shaffir said. "Even last year he took a hard line against the movement till he decided it looked better if he joined us, but his heart was never in it.”

Since then, not one but two tent cities have sprouted in Tel Aviv, one directly facing City Hall, this time with all legal permissions in place. The public's verdict, as articulated by a newsreader on Israel Army Radio, is that, "The movement for social equality is back on."

Alon Lee-Green, 24, another in the growing cadre of full-time activists who are asserting increasingly radical goals, believes there are in reality "good chances of firing the mayor."

This weekend promises to be very hot, in all the ways of a Middle Eastern summer.