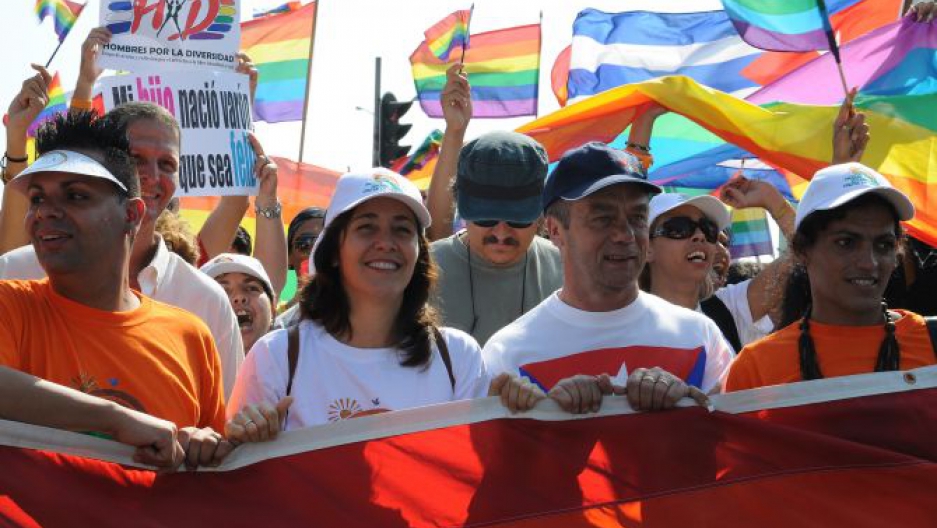 HAVANA, Cuba — Niurka says she is "halfway out of the closet" as a lesbian in Cuban society. She doesn't talk about her sexuality in public, and she's thankful nobody asks at work. But with her curly cropped hair and more masculine dress — most notably gym shoes on an island where most women prefer sandals — she says she can't conceal it.

On the streets of Havana, people sometimes call her "tortillera," she says, at first just mouthing the prerogative Cuban Spanish term for a lesbian. Niurka repeats the word in a whisper, leaning across the institutional waiting room chairs so that nobody else can hear her on the broad, airy porch at the Cuban National Center for Sexual Education (CENESEX).

CENESEX, a government-funded institution founded in 1989, made headlines in the United States last month when Mariela Castro, daughter of President Raul Castro and director of the center, met with American gay rights activists and chaired a panel on sexual diversity at an academic conference in San Francisco. The visit drew criticism from several US leaders, including Sen. Robert Menendez (D-NJ), who called Castro "a vociferous advocate of the regime and an opponent of democracy."

“If we don’t change our patriarchal and homophobic culture…we cannot advance as a new society, and that’s what we want, the power of emancipation through socialism,” Mariela Castro said. “We will establish relationships on the basis of social justice and social equality...It seems like a utopia, but we can change it.”

The Cuban government now touts its record on LGBT rights, including the governing Communist Party’s endorsement of an International Day Against Homophobia march last month, but its history bears many wounds for gay Cubans. For years following the successful socialist overthrow of dictator Fulgencio Batista in 1959, homosexuals were imprisoned for “re-education,” branded traitors who didn’t fit Che Guevara’s definition of the “new man” who would move the country forward.

"The object was to make adequate this 'new man,'' said Lázaro Hernández, a psychiatrist at CENESEX.

Official persecution ended in the mid-1970s, and Fidel Castro ultimately took personal responsibility for the revolution's treatment of gays in a 2010 interview with the Mexican newspaper La Jornada. Homosexual acts were decriminalized in 1979, but homophobia remains common in Cuba.

At the same time, Cubans who fled the island for the US argue that Castro's support for gay rights is disingenuous. Her visit to the US served as a public relations trip, they said, making Cuba look progressive even as the government denies its citizens basic rights.

"For Mariela Castro, or anybody else under the Castro dictatorship, to say they are representing the rights of anyone is an insult to the hundreds of thousands who have either been killed, jailed or assassinated by their own hands, or the nearly 100,000 people who’ve jumped into the ocean looking for freedom who haven’t made it here," Herb Sosa, executive director of Unity Coalition, a Miami-based Hispanic gay rights group, told the Miami Herald.

Despite criticism from the Cuban community in the US, CENESEX aims to change Cuban culture through government policies and citizen participation. As such, the Castros’ efforts on gay rights offer a peek into how Cuba may be changing.

Mariela Castro says she's continuing the work of her mother, Vilma Espín, a feminist revolutionary who started the Federation of Cuban Women. Espín, who passed away in 2007, wanted Cuba to legalize gay marriage.

Today, CENESEX is pushing for civil unions. While Castro says this is a compromise, other Cuban activists say they do not want "matrimonio" because the term is sexist, rooted in motherhood.

Hernández says a bill legalizing civil unions will pass "very soon," but Lourdes Fernández Rius, who studies family life at the University of Havana, is less optimistic. "The Cuban government is focused on many other problems that are very urgent, especially the changes to the economic sectors," she says, but homophobia also hinders legislation.

Mariela Castro successfully fought opposition based in economics and homophobia when she convinced the government to cover sex reassignment surgeries under Cuba's universal health care system in 2008. A limited number are performed each year due to the surgery's high cost.

Angeli Carmen Bravo was one of the first people to take advantage of this opportunity. "I owe a lot to CENESEX because my life changed completely," she says, sitting behind the center's front desk in a tight white tank top that shows off her cleavage.

Carmen Bravo picks up the phone with pink, manicured nails. Her low voice hints at her sex change from male to female.

She is thankful not only for the physical changes, but also for the social gains. Thanks to Mariela, she says, she was able to add the "i" to her first name, legally changing it from Angel to Angeli.

She feels accepted as a straight female and integrated socially at work. Though CENESEX is undoubtedly welcoming, it has a team of lawyers to represent LGBT clients in cases of workplace discrimination.

CENESEX also has implemented sexual education and gender-neutral games in Cuban schools. Carmen Bravo hopes such programs will change future generations' attitudes toward sexuality away from the "blue is for boys, pink is for girls" culture that she grew up with.

The resources, programs and legal developments created by CENESEX show that the Cuban political system can change. "We are opening a new stage in our development," says Olga Fernández Ríos, who studies Cuban politics at the University of Havana.

Economic reforms have taken precedence, she says, and Raul Castro has talked of making the Communist Party more democratic to ensure that it reflects the will of the Cuban people.

Whether economic, political or social, though, the reforms are designed to preserve socialism in Cuba. Critics, therefore, say the changes are merely "cosmetic."

"It is necessary to maintain some achievements of the Cuban Revolution," Fernández Ríos says, naming social justice among the top priorities. Change requires "high levels of consensus" among the Cuban people, she adds. "We need to improve participation."

When Cubans talk about the participation in civic life, though, they understand civil society to be part of the government. The only sanctioned channel for fighting for LGBT rights is CENESEX, which is part of the ministry of public health.

Amnesty International reports that that outside CENESEX, gay activists "face repression, intimidation and harassment when trying to peacefully exercise their rights to freedom of expression, association and assembly," says Gerardo Ducos, a researcher on the Caribbean region.

"The problems the members of these groups face are not necessarily linked to their sexual orientation or identity but to the fact that the Cuban government doesn't allow independent organizations (outside government control) to thrive, to register and operate legally," he says.

Niurka said she is fine working within a government organization. She's part of a lesbian group that has met weekly at CENESEX headquarters in Havana since 2004.

"As a whole, we want to fight discrimination but each of us is here for our own personal reasons," Niurka says, sitting on CENESEX's porch with three other members of the group and a counselor.

Women attend the meetings to learn about mental and physical health issues. They have been trained to promote sexual health in their communities. The group also helps them build self-esteem.

Niurka has never lacked confidence, she says, but she joined the group as soon as it formed because just by participating she would be promoting change.

"I was interested in adding my grain of sand to this fight," she says. "I'm not the only one who is going to benefit but all the lesbian women of Cuba."

Patricia Arenas, a retired counselor and consultant with CENESEX, has been helping the lesbian group determine how they can best work toward its goal of fighting homophobia in Cuban culture.

The group has discussed fund-raising and leadership, but the process is more important than the conclusions, Arenas says. Neither she nor any government officials are telling them how to run their group, but rather they are shaping it themselves.

Outsiders' criticism of the lack of freedom on the island misses the mark, she says.

"We are not a perfect society. We have a lot of problems, but generally they are different than what is identified. I prefer the problems of my own society to the problems of other countries."

Niurka agrees. Though she's had insults yelled at her on the street, she doesn't worry about hate crimes as LGBT people in other Latin American countries must, she says.

Her friend Deisy chimes in from across the porch, sharing her reason for hope. "If discrimination were inherent in society, centers like this wouldn't exist," she says.