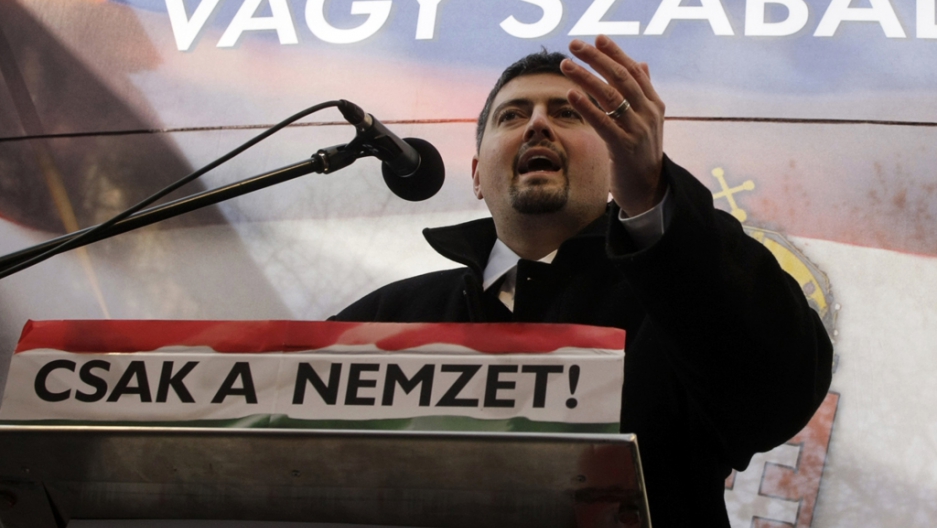 Csanad Szegedi, a Hungarian member of the European Parliament and member of the right-wing party Jobbik, speaks to supporters in Budapest on Jan. 14, 2012.
Credit: FERENC ISZA
Share

Csanad Szegedi, a leader of Hungary’s far-right political party, said he’s “digesting” a revelation that his grandmother was Jewish and survived the Holocaust.

According to Agence France-Presse, Szegedi said he “wasn’t surprised,” but added heritage isn’t as important as his commitment to Hungary.

“To be Hungarian for me has always been a responsibility (towards my country), that has nothing to do with racial supremacy,” Szegedi told the extremist newspaper Barikad.

He added that, “Knowing who is a pure-race Hungarian is not what counts. The important thing is the way one behaves as a Hungarian,” JTA.org reported.

The revelation attracted the attention of Hungary’s Jewish leaders.

“I will ask Holocaust survivors in my family if anyone inquired whether they behaved like Hungarians before they were rounded up to be sent to their deaths,” Jozsef Horvath, president of the Beit Shalom synagogue, told JTA.

Szegedi is a member of the European Parliament and leader of the Jobbik party, known for using anti-Semitic and anti-Roma rhetoric.

He generated international headlines in 2009 by attempting to enter European Parliament dressed in a paramilitary uniform of the Hungarian Guard, The Algemeiner reported.

Jabbik’s leadership told The Algemeiner that Szegedi would remain in his position with the party.

More from GlobalPost: Why neo-Nazis and the ultra-right are rising in Eastern Europe