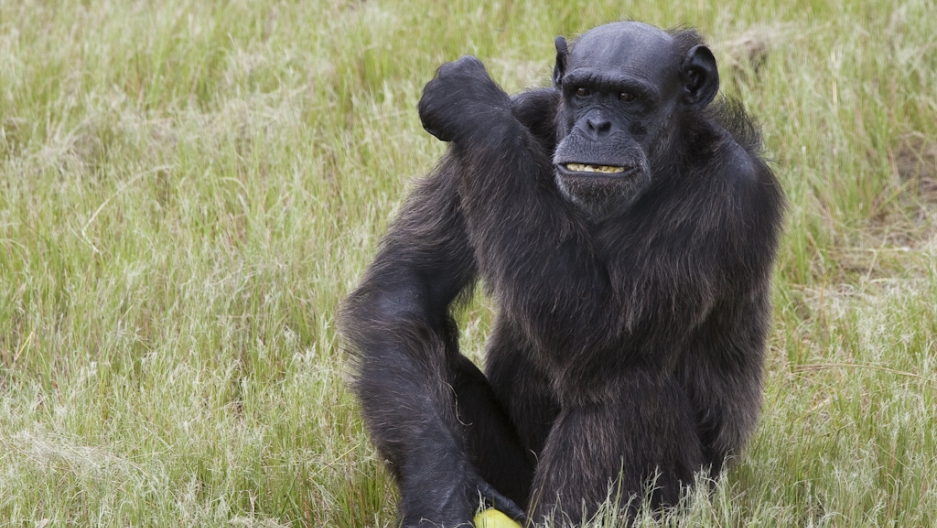 JOHANNESBURG, South Africa — An American student remains in hospital after being attacked by chimpanzees at Jane Goodall's Chimpanzee Eden sanctuary in South Africa, in what paramedics described as a "frenzied" assault.

Andrew F. Oberle, a University of Texas at San Antonio graduate student in anthropology, had been studying chimpanzee behavior at the sanctuary.

A university spokesperson confirmed Oberle was injured in the attack, the San Antonio Express-News said. His parents are on their way to South Africa.

Oberle, 26, was leading a tour Thursday when two male chimpanzees, Nikki and Amadeus, dragged him under a fence and then pulled him for more than half a mile into their enclosure, the Afrikaans-language Beeld newspaper reported. The tourists were led away to safety by other staff members.

Oberle suffered serious wounds, including bites, and is in critical condition at the Mediclinic Nelspruit hospital in South Africa. He reportedly lost an ear, and several fingers and toes in the attack.

More from GlobalPost: Chimps that attacked Andrew Oberle, US student, 'won't be put down'

This was the first reported attack at Chimp Eden, a Jane Goodall Institute facility that opened six years ago and was the subject of a TV show, Escape to Chimp Eden, broadcast on Animal Planet.

The TV show chronicles efforts to rescue chimpanzees from abuse and neglect, including from circuses, nightclubs where they are kept as entertainment, and from the bushmeat trade in parts of Africa.

Visitors can take guided tours at the sanctuary, where they are told about chimp behavior and learn the animals' stories.

Tourists learn that chimpanzees have six times the strength of a human.

David Oosthuizen, Chimp Eden's executive director, said in a statement: "This is a terrible tragedy that should never happen. All our thoughts and prayers are with this young man and his family."

"Any interaction between humans and wild animals can be dangerous as wild animals are often very strong and can act aggressively if approached or if they feel threatened," he said.

Oosthuizen added: "Additionally, the chimpanzees at Chimp Eden have suffered horrible injuries and abuse from humans and therefore have to be treated with caution."

The Chimp Eden sanctuary, located near Nelspruit, about 180 miles northeast of Johannesburg, has been on lockdown since the attack.

Eugene Cussons, a South African conservationist and managing director of the Chimpanzee Eden sanctuary, told the Associated Press he was himself attacked by a chimp as he tried to rescue Oberle.

Cussons, who hosts the TV show about Chimp Eden, said he had to fire into the air to scare away the animals.

He told the AP that Oberle had broken the rules by going through one of the two fences around the chimp enclosure, and added it was unclear what exactly had happened.

"You can train for it, you can do your best to prepare," Cussons told the news agency. "But when it actually happens, it's shocking and traumatic for everyone."