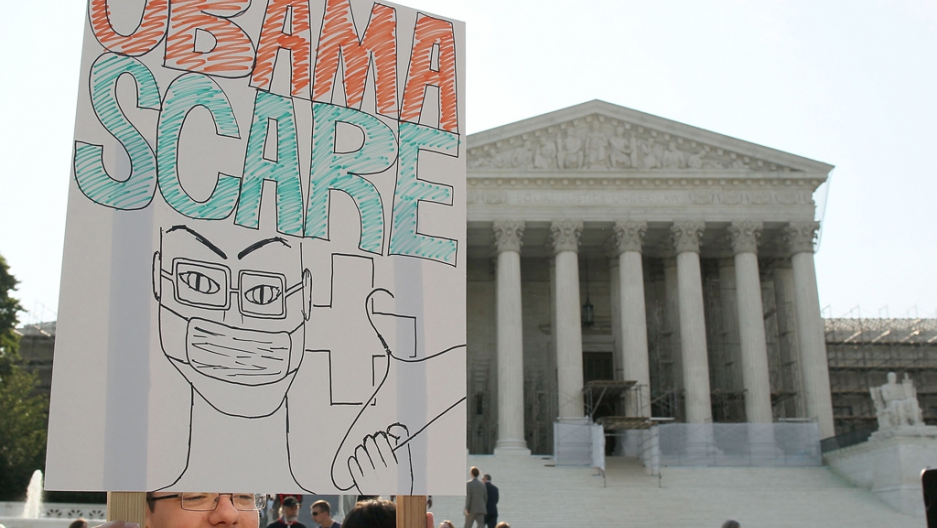 A man protests against the Obama administrations health care plan during a protest in front of the US Supreme Court, on June 28, 2012 in Washington, DC. Today the high court is expected to rule on the constitutionality of the sweeping health care law championed by President Barack Obama.
Credit: Mark Wilson
Share

The US Supreme Court ruled that the core of the federal health care legislation, the individual mandate, was constitutional, on Thursday morning.

The court upheld the majority of the Affordable Care Act, including the controversial individual mandate, according to the SCOTUS blog.

The SCOTUS blog pointed out the key phrase: "Our precedent demonstrates that Congress had the power to impose the exaction in Section 5000A under the taxing power, and that Section 5000A need not be read to do more than impose a tax. This is sufficient to sustain it."

Reading his dissent, Kennedy said, "In our view, the act before us is invalid in its entirety," according to Politico.

As The Washington Post noted, the decision could play a pivotal role in President Obama's bid for re-election. The health care law was a landmark achievement for the Obama presidency, while Republicans and presidential candidate Mitt Romney vowed to repeal it.

If upheld, the law would extend coverage to more than 30 million Americans who currently lack it, said The Post.

The court was deciding on three separate matters:

1. Whether the case could be heard yet, because of the Anti-Injunction Act which says that taxes cannot be challenged until they are first levied. The court was to decide whether the health care law's penalties, which would be due in 2015, could be considered a tax, said The New York Times.

DECISION: The court held that the Anti-Injunction Act did not apply, according to the SCOTUS blog.

2. Whether the individual mandate, what some consider the core of the Affordable Care Act, was constitutional. The mandate requires even healthy people to have health insurance or risk paying a penalty, and would make universal health care a possibility.

Critics of the health care law said the mandate amounted to the government forcing people to buy a service they did not need, according to NPR. Supporters of the mandate saw it as a way of spreading the cost of health insurance among a wider pool of people.

DECISION: The individual mandate was upheld as a tax. The liberal justices would uphold the mandate under the Commerce Clause as well, but there were not five votes to uphold it on these grounds.

More on GlobalPost: What the Medicaid ruling in the Supreme Court decision means

3. If the mandate was struck down, the court would decide how much of the law could be preserved. Called "severability," this means the court would have to decide how much of the health care law could survive if the individual mandate was ruled unconstitutional. Many argue that other provisions in the health care law, such as a ban on insurers denying people coverage due to preexisting conditions would not work well without the individual mandate.

Back in March, The Post reported that Justice Antonin Scalia asked the court-appointed lawyer arguing for severability, "Is this not totally unrealistic? That we are going to go through this enormous bill item by item and decide each one?"

DECISION: The court never reached the severability question as it chose to uphold the mandate.

The entire decision can be found here. The SCOTUS blog provided a guide to reading the Supreme Court's ruling, here.