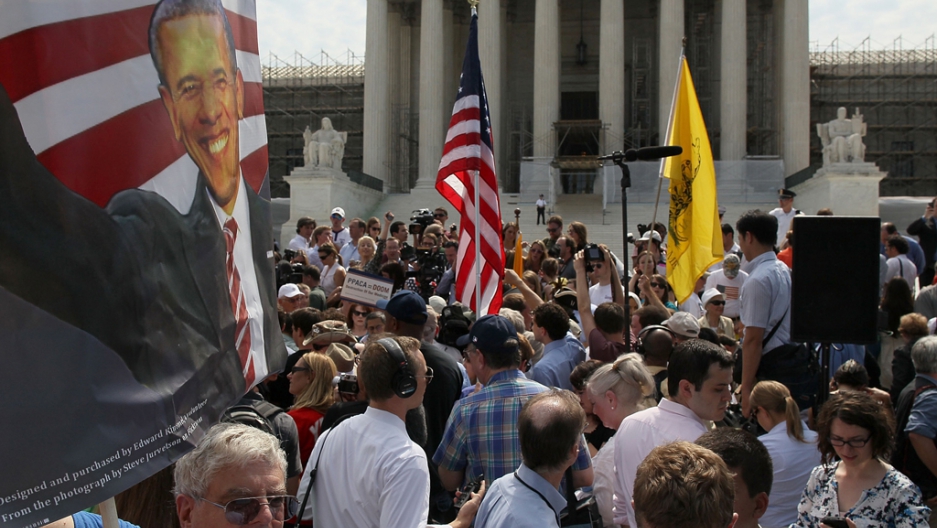 A supporter holds a sign of President Barack Obama in front of the U.S. Supreme Court, on June 28, 2012 in Washington, DC. Today the high court upheld President Obama's health care overhaul, in a victory for the president and Congressional Democrats.
Credit: Mark Wilson
Share

Speaker of the House John Boehner, a Republican renewed his vow to repeal the legislation upon hearing the Supreme Court's decision that the health care law was constitutional. "Today's ruling underscores the urgency of repealing this harmful law in its entirety," Boehner said in a statement, according to Reuters.

House Minority Leader Nancy Pelosi said in a statement, "This decision is a victory for the American people. With this ruling, Americans will benefit from critical patient protections, lower costs for the middle class, more coverage for families, and greater accountability for the insurance industry," according to Politico.

Senate Majority Leader Harry Reid said, "We know that we when we come back here after the elections, there may be some things we need to do to improve the law and we’ll do that working together, but today millions of Americans are already seeing the benefits of the law that we passed," according to The Wall Street Journal.

Senate Minority Leader Mitch McConnell echoed Boehner's statement, saying, "Today’s decision makes one thing clear: Congress must act to repeal this misguided law. Obamacare has not only limited choices and increased health care costs for American families, it has made it harder for American businesses to hire," according to Politico.

The Journal reported that "House Republicans streamed into a closed-door meeting, mostly silent and appearing dazed."

Rep. Joe Barton, a Republican from Texas, gave a thumbs down sign and said, "It's really bad - really."

Here are some other reactions: