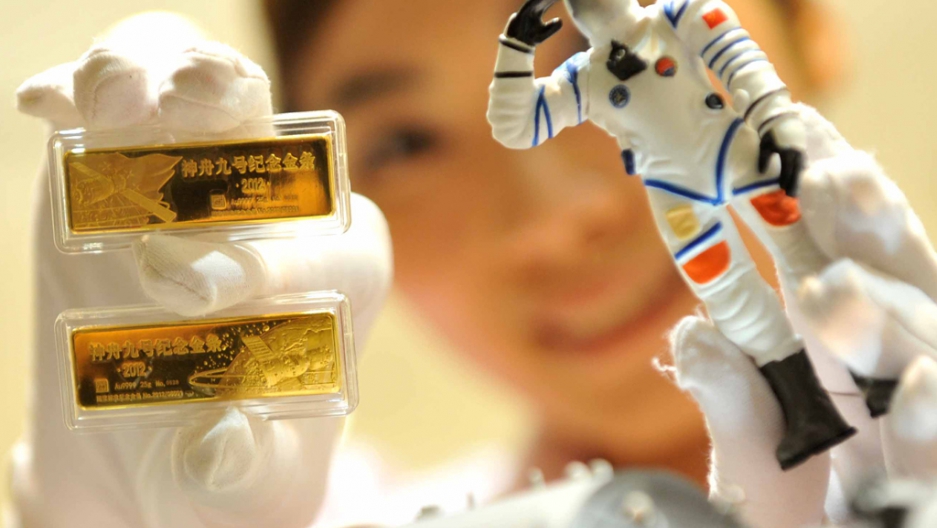 A worker shows a pair of gold bars to mark the launching of China's Shenzhou-9 spacecraft in Beijing.
Credit: AFP
Share

TAIPEI, Taiwan — China’s manual docking of the Shenzhou-9 spacecraft may not be a giant leap for mankind. But the milestone, which occurred last weekend, is one solid step further in China’s race to catch the US space and technology program, not to mention its quest to build a space station.

China, a country run by technocrats, is busy pumping hundreds of billions of dollars into space, science and tech R&D. Meanwhile, government spending in those areas in the US appears to have plateaued.

The US still spends more than other countries. According to the National Science Foundation, the US is the largest single R&D-performing country, accounting for about 31 percent of the global total in 2009. But that figure is down from 38 percent in 1999.

Meanwhile, China accounted for just 12 percent of the global R&D total in 2009, according to the National Science Foundation.

But China has been increasing its overall R&D spending at an exceptionally high rate over the past 10 years — growing at about 20 percent annually, according to the Organization for Economic Cooperation and Development (OECD).

In other words: The US isn't being outspent yet. But other countries, like China, are catching up.

It remains to be seen whether China will bolster its economy by beefing up science and tech spending, or whether its investments will significantly shift the world science landscape. But one thing is known already for sure: Many in America are paying close attention and not without a hint of trepidation.

More from GlobalPost: Chinese women, from astronauts to forced abortions

Rolf Lehming, program director of Science and Engineering Indicators at the Virginia-based National Science Foundation, told GlobalPost that the US should be asking itself some hard questions at this juncture.

“To what extent will a weakening economy weaken the probability that NASA will engage in path-breaking scientific experiments? There’s also a whole supplier chain that depends on NASA and that’s rapidly being dismantled. Those are legitimate questions,” he added.

Buzz Aldrin — the second US astronaut to step foot on the moon in 1969 — wrote in January that “the Chinese challenge comes at a dangerous convergence, the international debt crisis and a contentious … presidential election.” He stressed the need for the US to continue its commitment to NASA, saying that the advantages — for the economy and otherwise — "are almost incalculable."

Lehming and Aldrin's concern is not without cause.

Since agency funding began a gradual decline from more than 4 percent of the national budget during the mid-1960s, its champions have argued that the US draws widespread economic benefits through technological breakthroughs derived from the program. And those breakthroughs, they say, create inventions, which in turn create jobs.

As part of its cuts, NASA retired its three active space shuttles in 2011, effectively ending its manned space program. Since that time, US astronauts have been hitching rides to the International Space Station aboard Russian Soyuz spacecraft, to the tune of nearly $63 million per seat. Russia — America's fiercest competitor since the dawn of the Space Race in the early 1950s — bills the agency for each astronaut's trip.

US funding for the space station runs out in 2020. Around the same time, Beijing has said it will have its own, albeit smaller, station in place.

Nobody knows for sure how much China spends on its space program. John Pike, executive director of GlobalSecurity.org, a Washington-based intelligence provider, puts the figure at more than $5 billion for 2012.

And while China is most certainly behind the US in terms of developing the technology for its space program — some say as many as 40 years behind — its gains over the last decade have been impressive: sending a manned mission into space, completing a spacewalk and launching lunar orbiters. This latest docking mission was part of a 2011 government plan, which calls for a major five-year space program expansion.

Moreover, China is just beginning to rev its engines. A new era of modernization and spending in science and research is envisioned under the Middle Kingdom’s five-year plan, which calls for a bump in R&D to 2.2 percent of GDP by 2015, from 1.8 percent in 2010.

"The Chinese have indicated that by 2020 they hope to spend around 2.5 percent of GDP on research and development," said Penn State University professor Denis Simon, in an Agence France-Presse story last year.

Simon, who also advises the mayor of Dalian, a booming coastal city in northeastern China, said that Beijing wants to quickly become the “world’s largest owner of intellectual patents.”

That strategy is already materializing. US Trademark and Patent Office data showed that China registered 1,655 patents in the United States in 2009. In 1999, it had registered only 90.

A number of pundits have dismissed China as being too far behind the curve to be relevant. A Time magazine story this month said China’s space program is “standing on the shoulders of those long-ago giants,” adding, “you have every reason to be proud if you’re able to summit Mt. Everest, but don’t kid yourself: You ain’t Sir Edmund Hillary."

But there are signs that the US is feeling pressure from its competition.

According to the American Association for the Advancement of Science, the world's largest general scientific society, a US budget compromise reached for fiscal year 2011 effectively cut some scientific collaborations between the United States and China. The cut ostensibly bans NASA cooperation with the third member of the sky-high docking club.

The Royal Society, Britain's national science academy, reported in 2011 that China is now the second largest producer of published scientific research. The Royal Society expects it to supersede the US at the top spot by next year.

And of course, from the very beginning of the International Space Station, which was launched in 1998, Washington blocked Beijing's participation, citing technology-theft concerns.

“The space program carries Chinese innovation, technical prowess and it signals we have arrived we are among the big boys. I’m not surprised. I’m impressed," said the National Science Foundation's Lehming of its latest feat. "I don’t think we have seen anything like this in recent memory ... They may be a few years off [the US], but in the meantime, there is no question that China is making big strides in a number of key areas.”

Meanwhile, the Shenzhou-9 is expected to touch down in Inner Mongolia later this month.