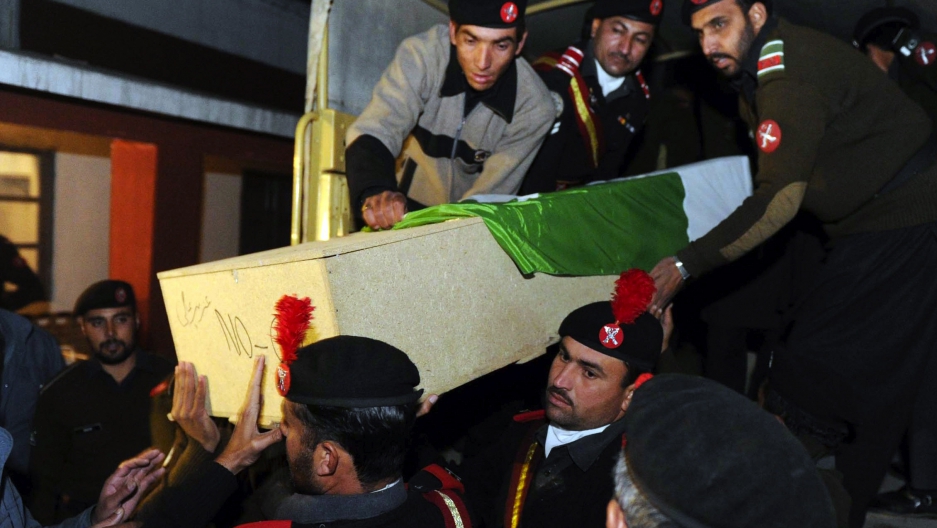 Pakistani Frontier Constabulary soldiers off-load a coffin of a soldier prior to a funeral ceremony in Peshawar on January 5, 2012. The bodies of 15 members of Pakistan's paramilitary Frontier Constabulary (FC) were found on January 5, almost two weeks after they were kidnapped from a northwestern town, officials said. The Tehreek-e-Taliban Pakistan (TTP) spokesman Ehsanullah Ehsan claimed responsibility for the killings, telling AFP: 'We have taken revenge for continued operations of security forces against us.
Credit: A. MAJEED
Share

The Taliban today released footage showing 17 Pakistani soldiers that they claim were killed in a recent attack near the country's border with Afghanistan, reported The Associated Press.

Agence-France Press said the video was claimed by the prominent Pakistani militant group Tehreek-e-Taliban, an alliance of extremist groups that united in 2007. The appearance comes at a time of heightened political turmoil in Pakistan, with former Prime Minister Yousuf Raza Gilani forced to leave office last week over a longstanding corruption case.

In the video, provided to AP by a Pakistani Taliban spokesman, the group's leader Hakimullah Mehsud said such attacks will continue until Pakistani forces no longer assist US counter-terrorism efforts and the government imposes Islamic law, or sharia, in Pakistan.

AP said the footage -- the date of which was unclear -- cited 18 dead but only showed 17 heads of soldiers claimed killed in a border assault on Sunday.

Senior Pakistani officials confirmed to AFP that 17 troops were killed in the attack near the strategic border transit area of Dir in eastern Afghanistan on Sunday.

The Afghan region borders Pakistan's volatile Swat Valley -- known as a haven of militant activity and the focus of a Pakistani army offensive in 2009, according to AFP.

Pakistan's foreign ministry today issued a formal complaint over the incident, saying, “the government of Afghanistan should take appropriate measures to prevent the recurrence of similar incidents in the future," reported AFP.

The United States has criticized Pakistan for not doing enough to crack down on extremist activity along its border with Afghanistan, accusing the government of allowing militants to cross easily between the two countries and maintain bases in the mostly lawless tribal mountain areas.