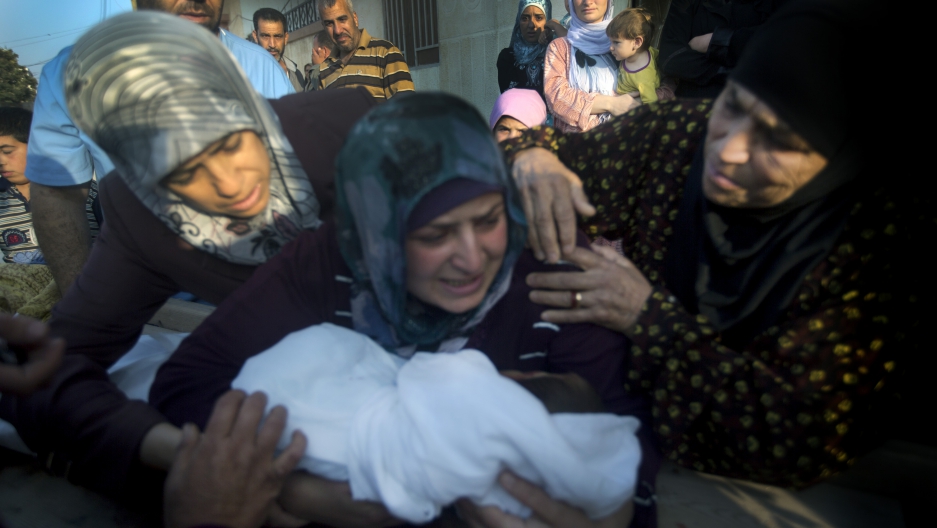 A mother holds the body of her 5 year-old son during his funeral after he was killed by a sniper outside the city of Homs.
Credit: STR
Share

Until two weeks ago, his family lived in the besieged city of Homs in western Syria. Here, in their new home further north in Kureen, this animated boy speeds around on his toy car, offering “tea” to guests from a plastic cup and teapot.

Having witnessed more bloodshed and destruction in his short life than most will in a lifetime, he speaks offhandedly about bombs, tanks and death. In the distance, gunfire breaks through the hum of helicopter blades.

“Why doesn’t that helicopter ever stop shooting?” he complains to his guests, as if talking about the weather. “We need an RPG. Would someone just shoot that thing?”

More from GlobalPost: Inside Syria: Adopt a Syrian rebel

Sa'id’s family is just one of thousands that has been displaced or worse since the Syrian conflict began 15 months ago. Their personal struggle is taking place against the backdrop of an international scramble to either hasten the fall of Syrian President Bashar al-Assad, or protect him.

The march toward foreign intervention may have taken a leap forward this week when the Syrian army shot down a Turkish jet along its border, sparking strong condemnations from Turkey, Syria’s neighbor, and NATO, which aided Libyan rebels last year by enforcing a no-fly zone and launching airstrikes against government targets.

All of that, however, is happening far from Kureen, a small Sunni village in Syria’s northern Idlib province, where Sa'id and his family attempt to create a new, albeit tentative, home.

At the sound of the helicopter gunfire, Sa'id's older brother Alah, 14, tells everyone to lay low.

Their father, Assad Agini, says that of his three sons, Alah suffers the most from traumatic stress. While he has heard the same bombs and screams as his brothers, Alah was born blind. So he has had to imagine the horrors going on around him.

Until the schools in Homs closed at the end of last year, Alah had always been at the top of his class. He showed off his brail typewriter on which he now writes about the killing happening all around him, and how much he misses school, his teachers and his classmates.

His mother, Maha, says that Homs had the only school for blind children in the country. Every school in Homs, she said, is now either destroyed or occupied by government soldiers.

Until his recent defection, Assad Agini, 39, had been a major in the Syrian air force. He said the air force intelligence unit organized most of the attacks on Homs. Although he says his position did not require him to kill, he witnessed atrocities.

Assad Agini said Homs had been the victim of a “systematic eviction” by means of “genocide.”

Over time, the conflict in Syria has taken on sectarian tones, and Assad Agini said the government was specifically targeting Sunnis. The majority of Syria’s population is Sunni, while Allawites, an offshoot of Shiite Islam and a minority, dominate the government.

“All Sunni areas are being emptied,” he said.

He described the process: first a city is surrounded by the military, which bombards it with heavy shelling. Then, a mixture of army, special forces and shabiha — civilian mercenaries fighting for the government — moves through houses looting and killing.

He has seen people slaughtered with knives, tortured and burned alive.

“We are told we are the army for our homeland. Our job is to protect our people,” he said. “Then we are ordered to carry out a brutal revenge against those we have sworn to protect. No words can describe how it feels.”

Assad Agini said he never witnessed army officials giving direct orders to kill. But, he said, those entering the city, in particular the shabiha, are given a “free hand” to kill, loot and attack at will.

“The job of the army is to prevent resistance to this kind of violence,” he said.

Some soldiers revel in the violence, he said, taking cell-phone videos so they can brag to friends. Many soldiers were benefitting from the looting. Especially for the newer recruits, wages are low, Assad Agini said, and these military actions have given them a chance to turn their fortunes around.

As for the rest, they are angry at the regime, he said. But they fear both the repercussions of defection and retribution from the rebels. Assad Agini said they see it as “kill or be killed.”

Often at home alone with the three boys, Maha said they are constantly afraid. While her husband was still an army officer, he was able to move more freely, enabling him to smuggle food for the family. Medicine, however, was harder to find.

Assad Agini sometimes managed to bring medical supplies back from the Lebanese border. On one occasion, Maha asked him to bring medicine for an old woman she knew was unwell. But when he got to the house, it had been set on fire. She was burned alive, Maha said.

Fearful that his family would be next, or that he himself would be arrested, Assad Agini defected after 20 years in the army. And the family fled to Kureen.

“We had to flee. There were snipers everywhere. We had to leave everything behind. This dress is all I have left,” Maha said. “I loved Homs. It was my home. Before the revolution it was beautiful.”

As Maha and her boys enjoyed dinner on the living room floor, Assad Agini cleaned his Kalashnikov rifle and prepared to join a new battle alongside the Free Syrian Army.

In between bites the boys giggled. When a rainstorm erupted outside, Sa’id yelled to his father: “Papa, the rain went boof! Just like a tank!”

“I don’t like Homs,” the boy added. “There are too many tanks and too much shelling. I like it here, where only the thunder goes boof.”