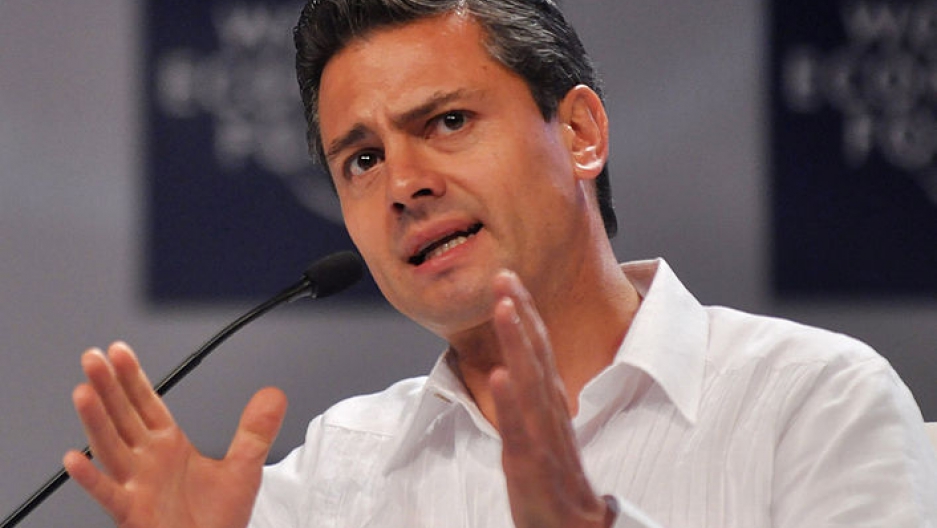 Wednesday marks the final day of campaigning before Mexico’s presidential election Sunday, when voters will head to the polls with the hope of electing a leader who can bring an end to years of drug-related violence.

Felipe Calderone, who launched the war against the drug cartels when he was elected president in 2006, cannot run again because of term limits.

And if opinion polls are right, the Institutional Revolutionary Party, or PRI, will return to the presidency after more than a decade long absence. Its hopes rest with a young, energetic candidate with a soap-star wife: Enrique Pena Nieto.

As he entered the convention center in the city of Tampico, Pena Nieto appeared more like a pop star taking the stage than a presidential candidate. Opponents accuse him of emphasizing style over substance. But Pena Nieto, the former governor of Mexico State, says he's more than just a pretty face.

But not everyone is swayed by his dashing good looks or his record in office.

During the campaign, a large student-led protest movement has formed around the slogan, "I am 132." The students oppose what they see as a favorable bias towards Pena Nieto's campaign by the country's main media outlet, Televisa.

The movement takes its name from the 131 students who posted YouTube videos about a university protest against Pena Nieto. It's since been been credited with a recent drop in his lead in the polls.

Grant visited Tamaulipas, one of the most dangerous states in Mexico, to investigates PRI's alleged ties to regional drug cartels. The state has been run for decades by the PRI. Two former governors, Tomas Yarrington and Eugenio Hernandez, are facing charges in the United States and Mexico for alleged links to the powerful drug traffickers.

On the day he arrived in the state capital, Ciudad Victoria, Grant said he saw scorch marks on the road in the business district. A car bomb had detonated there the previous day. Hours after the explosion, 14 mutilated bodies were dumped outside a municipal government building in a nearby town.

For many, Tamaulipas is still an example of the old PRI, of a party deeply mired in corruption and openly aligned with the drug cartels. In that sense, many ask how a Pena Nieto administration could really break away from the past. But Pena Nieto maintains that his party has evolved.

"I can say categorically that in my government, there won't be any form of pact or agreement with organised crime," he told the BBC.

In a hotel room, Grant met Susana, though that's not her real name. A few years ago, she dated a member of one of the most powerful drug cartels in Tamaulipas. She eventually managed to pull away from the group, though she now lives in constant fear for her life.

Susana says PRI will win again in Tamaulipas, but she doubts that the party has changed.

"We have a saying here: 'small town, big hell'" she said. "Well we live in a small town, and this is a hell that is too big."