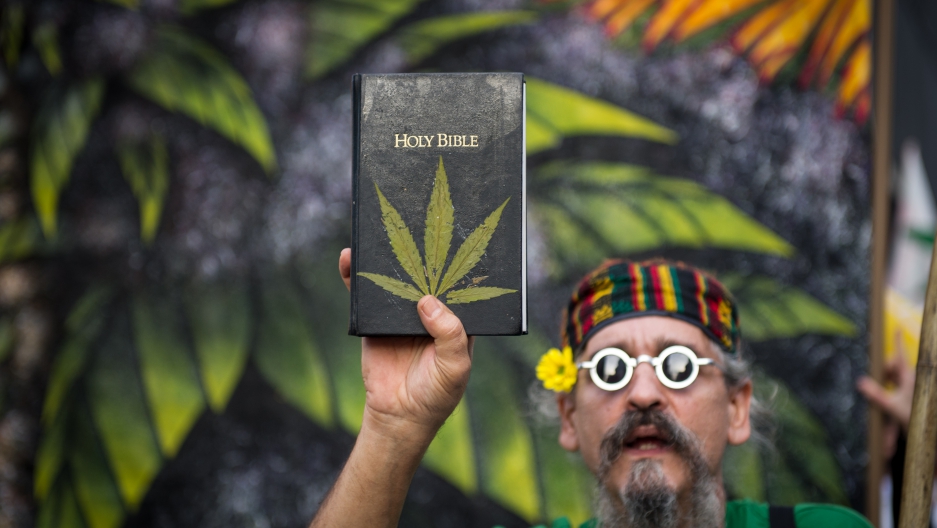 A man holds a Bible with leaves pasted on the cover simulating a marijuana plant during a demo for its legalization in Sao Paulo, Brazil, on May 19, 2012.
Credit: YASUYOSHI CHIBA
Share

Australians and New Zealanders are the world's biggest recreational drug users, according to the UN, with more weed smoked Down Under than anywhere.

In fact, annual use among Aussies and Kiwis for all drugs except for heroin "remain much higher than the global average," said the 2012 United Nations World Drug Report, published late Tuesday in Vienna.

"Heroin, cocaine and other drugs continue to kill around 200,000 people a year, shattering families and bringing misery to thousands of other people, insecurity and the spread of HIV," UN Office on Drugs and Crime (UNODC) director Yury Fedotov said in a statement.

Five percent of the world's adult population aged 15 to 64 — around 230 million people — was estimated to have used an illicit drug at least once in 2010, the report notes.

Problem drug users, mainly heroin- and cocaine-dependent persons, numbered one in every 200 people — or about 27 million, roughly 0.6 percent of the world adult population.

Despite this, opiate use in North America and Europe appeared "to be stable or shrinking."

Reuters reported that a poppy blight in Afghanistan was likely to drive up opium prices and fuel a shift to potentially lethal heroin substitutes like desomorphine — whose street name is krokodil.

"It is a powerful drug which can kill people in just two months, in a few weeks," Fedotov said of krokodil, a crude, codeine-based drug that users inject and which attacks body tissue, causing serious health problems.

Further, the drop in levels of cultivation and production of opium and coca had been offset by rising levels of synthetic drug production, the report found.

In terms of drug seizures between 2000 and 2010, the US came in second behind Mexico for cannabis, while for seizures of cocaine, Columbia topped the rankings with the US second.

For opium seizures, Iran came first by a huge margin (82 percent of the global total), while Spain seized more cannabis resin than any other country.

In terms of synthetic drug seizures between 2000 and 2010, the US led the way in ecstasy while Mexico seized more non-ecstacy "amphetamine-type stimulants," with the US fourth behind China and Saudi Arabia.

Meanwhile, the major destinations for cocaine traffickers continued to be in North America, Europe, Australia and New Zealand, with Mexican drug cartels making strong inroads into the Oceanic market, the report found.

In Australia, the use of ecstasy is in decline, but cocaine use is on the rise and Australians and New Zealanders consume more marijuana per capita than any other country.

Between 9.1 and 14.6 percent of the populations in those countries use the drug, compared to the estimated annual worldwide usage of 2.6 to 5.0 percent.