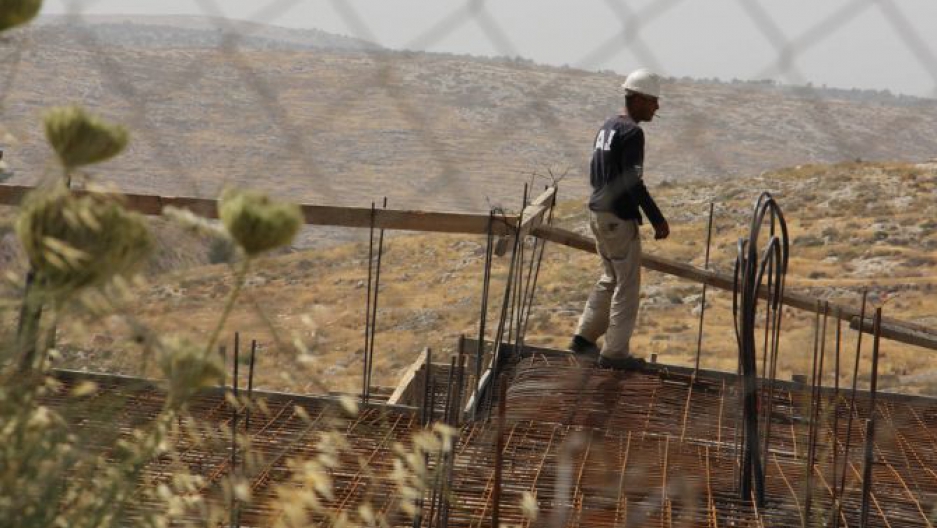 A Palestinian worker frames a house in the Israeli settlement of Nili.
Credit: Rebecca Collard
Share

He is putting the finishing touches on the office of a real estate firm that will sell new homes in this Jewish settlement in the heart of the Palestinian West Bank. More Palestinian workers frame new houses just down the hill.

Tile by tile, beam by beam, they are among tens of thousands of Palestinians laboring illegally to help Israeli settlers colonize the very land these workers hope will be part of their future sovereign state.

“We have no work. If there was another work, we wouldn’t come here,” says Ziad Abu Nar as he hangs the front door of the new office.

With their traditional farming economy disrupted by the Israeli occupation and the unemployment rate above 30 percent, West Bank Arabs like Abu Nar are left with increasingly limited options for supporting themselves. Although billions of dollars in international aid have helped turn the de facto Palestinian capital of Ramallah into a boomtown, the average West Bank resident hasn’t benefited.

“If you want to buy anything — hummus, a sandwich — it is very expensive. If I make 50 shekels a day, I cannot afford life.”

While the wages are low, prices in the West Bank are not. A liter of milk costs 12 shekels ($3.15), electricity is substantially more expensive than in the US and fuel is nearly twice the price.

Settlement construction jobs pay substantially more than most of the other jobs available, said a 21-year-old named Issa who recently quit his job at a Palestinian food-packaging factory to work in the Nili settlement.

“It’s three times as much,” says Issa, cleaning the grout from between the recently laid floor tiles.

There are now nearly half a million Israeli settlers living in among 225 Israeli settlements and outposts in the West Bank, captured from Jordan by Israel in the Six-Day War of 1967. In 2011 alone, there were 1,850 new buildings started in the settlements.

Some Israelis come to the West Bank guided by the belief that God promised them land, but others move there for more earthly reasons: Cheap, suburban homes and discount living. Housing, taxes, buses and some goods are more affordable here than in urban centers like Tel Aviv.

These settlements occupy hilltops across West Bank, while in much of the territory Palestinians must ask Israeli authorities for permits to build their own homes.

“These laborers have a big fear. They don’t want to speak about [abuses],” says Jabarin.

David Ha'Ivri, director of the Shomron Liaison Office, which advocates on behalf of Israeli settlers, says Palestinians do get the same rights as Israelis.

“All workers who work within Israeli communities are entitled to the same rights. Regardless of ethnicity,” says Ha'Ivri. He argues Israel is strict in enforcing labor law and that anyone suffering abuse should report it to the authorities.

The substantially higher wages offered by settlers, says Ha'Ivri, benefits Palestinian communities. “If the Israeli minimum wage is three times greater than the Palestinian, obviously it’s a benefit. It’s simple math,” says Ha'Ivri. “Which is why so many choose Israeli employers.”

While the Israeli courts have said settlers must respect rights of Palestinian workers, Eyal Hareuveni of the Israeli rights group B'Tselem, says, “there is nobody to enforce it … it has turned Palestinians into second-class citizens.”

More from GlobalPost: Worked Over: The Global Decline of Labor Rights

More than 100,000 Palestinians —including Abu Nar — once legally entered Israel proper for work. With the outbreak of the second Intifada, and frequent attacks and suicide bombings by extremists against Israel, Abu Nar and thousands of other Palestinians from the West Bank and Gaza had their permits cancelled.

Now many are given permits to work in Jewish settlements but are not allowed to enter Israel.

Israel replaced most of these Palestinian laborers with foreign workers primarily from Thailand, the Philippines and the former Soviet Union. It seemed like a quick, efficient fix, but now Israel is struggling to deport thousands of these workers — who want to stay in Israel — unable to simply send them back across the Green Line each night.

Abu Eyad maneuvers his aging donkey down the rocky hillside of his farmland in the West Bank village of Beit Sourik.

“That’s it. There. We can’t go any further,” says Abu Eyad, pointing to the ridge just below. He slides off his donkey next to a decades-old olive tree.

This land has sustained his family generations, but now Abu Eyad is unable to access 25 acres of it — some blocked behind a tall fence and security road used by the Israeli army and the rest expropriated for the much wealthier Jewish settlement, Har Adar, visible on the nearby hilltop.

Since 2005, he’s required a permit from the Israeli army to enter and work his family’s fruit and olive trees, but he says it’s been almost a year since he was last granted permission. Even if he is allowed access to his fields in the coming harvest season, he says, the trees’ productivity will have been stunted as he was unable to tend them all year.

“That’s my land over there,” he says, moving his hand to indicate the terrain reaching through the valley to the neighboring peak where red-roofed homes of Har Adar curve neatly around the slopping hillside.

“We used to live from that land. They took it for the settlement and put it behind the wall,” says Abu Eyad, still looking to his trees on the other side of the valley. “As an old man like me it’s hard to find another job. I have no other options.”

Abu Eyad’s children emigrated to the US in search of work, but many young people from this eroded farming community have joined in building Israeli settlements.

“There are big social problems because of the economic situation, people can’t get married,” says Muhummad Khaled Tari, head of the local municipality. He estimates the unemployment rate is 60 percent. “Poverty effects everyone and the psychological situation too. People feel like they are living in a big prison.”

“It’s often the case that people are on one side of the wall, and their land is on the other,” says Tari, referring to more than 400 miles of separation barrier that have been constructed by Israel to protect itself from attacks by Palestinian extremists. In 2005, Tari’s own land was also confiscated.

Hareuveni, who works with Palestinian farmers facing difficulties, says many lack water as settlements siphon off the majority of the resource. What Hareuveni calls a “vicious cycle” is essentially turning many Palestinians from small-scale farmers to laborers with few rights.

“They have to give up on their own agriculture because they don’t have any water and then they are going to work in agriculture in the settlements,” says Hareuveni. “And then the settlers are exploiting them.”

Here, things appear to be booming. Billions of dollars in international aid has bolstered the economy to the point that last year, the International Monetary Fund said the Palestinian economy is ready for statehood. But for Palestinian laborers this has meant very little.

According to a UN report released last year, while the economy of the Palestinian territories grew by 9.3 percent the year before, it didn’t relieve the massive unemployment, which remained around 30 percent. While unemployment is high, so is alleged corruption and nepotism and a handful of well-connected Palestinians have managed to get rich.

This, says Samir Awad, a professor of Political Science at the Birzeit University near Ramallah, is an indication of the “pseudo-boom” of the Palestinian economy.

“Yes, we realize right now the economy is emerging in the West Bank,” says Awad. But he cautions about this service economy without real industry — driven by the salary 150,000 Palestinian Authority (PA) employees and thousands of international aid workers.

Not only has it boosted prices in the Palestinian territories, making many workers’ salaries unlivable, but these jobs are fragile. If the PA doesn’t continue peace negotiations with Israel, both this aid as well as millions of dollars in taxes collected annually by Israel on behalf of the Palestinian Authority will be withheld.

In other words, Palestinians on the whole are becoming less and less self-sufficient.

Palestinian manufacturing has declined about half-percent per year since 1993 as cheap imports flood the market, closing factories and destroying jobs.

Even the black-and-white keffiyeh scarf — a symbol of Palestinian nationalism — is almost entirely made in China. There is only one keffiyeh factory left in the Palestinian territories and its staff has shrunk from a dozen people to one.

Meanwhile, exporting Palestinian goods is difficult due to “prohibitive transaction costs at crossing points arising from long waiting times, and by damaged goods — especially fresh produce,” according the UN report.

In 2010, the PA passed a law forbidding Palestinian workers from working on settlements, as well as the sale of settlement-made products in the territories.

“The Palestine Liberation Organization is threatening those who work in Israeli communities, but it has not been successful in providing another workplace,” says Ha'Ivri, also pointing out that despite the international money pouring into Palestine, there are still few jobs for Palestinians.

Here, Ha'Ivri and Jabarin agree. Without an economy that can employ these people, the law will continue to be ineffective.

“Yes, they said they would punish the Palestinian laborers working in settlements, but the questions before them is, how to solve their problem?” asks Jabarin. “How to find them jobs in other places instead of working in the settlements? It’s a big, big challenge.”