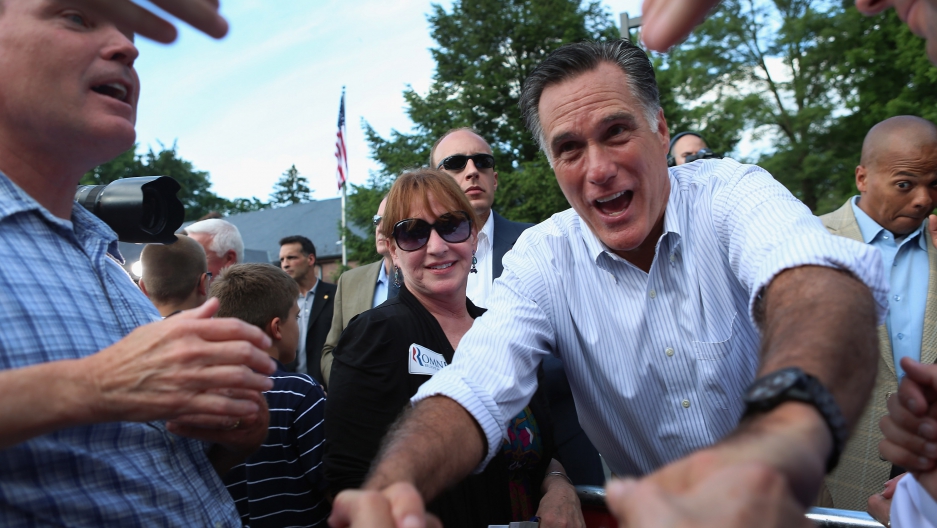 Republican presidential candidate Mitt Romney shakes hands with people during a campaign event. Romney will have to have to find a way to manage voters' demands with the demands of his faith.
Credit: Joe Raedle
Share

SALT LAKE CITY, Utah — Ben McAdams is the political equivalent of a unicorn. McAdams, who is running for mayor of Salt Lake County, is both a Democrat and a Mormon.

Sitting in his Salt Lake City office, staffed by enthusiastic young recruits, McAdams smiles as he contemplates his unique status.

The youthful politician — McAdams is just 37 — has a rich and varied past. A graduate of Salt Lake’s University of Utah, he completed Columbia Law School and practiced in New York City for five years before returning home. He is married to a fellow Columbia grad, who also works full time — something of a rarity for women in traditional Mormon communities.

McAdams sees no contradiction between being a Mormon — a Church whose members are overwhelmingly conservative — and a Democrat.

“I am a Democrat, not in spite of, but because of, my faith,” he says. “God teaches us to be good stewards of the earth, to help those who are oppressed, and to treat people with respect. Democratic concerns for the environment, for providing access to education and health care, are very much in line with my religious values.”

More from Highway '12: Of Mormons and beer

McAdams presents a refreshing change for many non-Mormons in Salt Lake — an estimated 55 percent of the city's population. Salt Lake County is home to some 43 percent of Utah’s voters. Young professionals see him as a bridge between their more liberal views and the Mormon community, which largely controls the state political machine.

But McAdams’ paradoxical political stance could prove a problem for him in November. He freely acknowledges that his loyalties are somewhat divided between Mitt Romney, the Republican candidate, who is Mormon, and the candidate of his own party, incumbent President Barack Obama.

“I think that President Obama has done great things under very difficult circumstances,” said McAdams. “But it is, of course, a moment to be proud of that a member of my faith is a strong, credible candidate. It is very exciting.”

In our age of political correctness and democratic inclusiveness, the Democrats are treading lightly on religion.  They have been careful not to make too big an issue of Romney’s faith.

But religious bias does exist, and has changed little over the past four decades.

A recent Gallup Poll shows that roughly 18 percent of Americans say they would not vote for a qualified Mormon candidate; a similar poll in 1967, when Romney’s father was contemplating a run for the White House, yielded a virtually identical number — 17 percent.

The recent poll, however, showed that one-third of respondents had no idea what Romney’s religion actually was.

In Utah, however, Romney’s religion is no impediment to success. Instead, it is the centerpiece of his attraction for the roughly 60 percent of Utahns who are Mormon.

More from Highay '12: In Iowa, American flags made in China

But for some in Utah, Romney’s faith is not necessarily a plus.

“Romney is a typical Mormon — smug and sanctimonious,” said Joseph Dimick, a retired Utah state judge. Dimick himself was raised a Mormon, but has “gradually drifted away” from the Church over the years.

"Tell me a man is a Mormon and I can tell you everything about him — his political stance, his economic policies, even what football teams he supports,” said Dimick.

Romney has done a good job of appealing to his core constituency, adds Dimick — “those who have, and those who identify with those who have.”

This means that the candidate has to walk a fine line between not irritating his base — the billionaires who support him for their own economic interests, such as less regulation and lower taxes — and the conservative, less affluent and less educated voters who nevertheless see themselves as aspiring to a more prosperous lifestyle.

“Romney’s constituents think that those who have money are somehow virtuous and deserving, and the poor are not,” said Dimick. “They want to see themselves as deserving.”

This sometimes leads to people voting against their own best interests — many experts have pointed out that Romney’s economic policies are unlikely to benefit those at the lower end of the scale, and could, in fact, tip the United States into an even greater depression.

Dimick says he is “not losing any sleep” over the prospects for November.

“Romney is unelectable,” he insists. “He has lost women, Hispanics, blacks, the educated. All he has left are angry white males.”

Romney’s appeal is to those who “want Mexicans to go home, want women back in the house, and who do not want evolution taught in the schools,” said Dimick. “He will also get the Bible belters, who will not vote for Obama under any circumstances.”

This seems to be borne out by developments — even Rev. Jeffress is now supporting Romney, because of Obama’s “unprecedented assault on religious liberty” and his “embrace of non-Biblical principles like abortion.” While the reverend still maintains that Mormonism is not Christianity, Jeffress is calling for Evangelicals to come out en masse and vote for the Republican candidate.

For lapsed Mormons like Judge Dimick, the prospect of a man of that faith taking control of power can be daunting.

More from Highway '12: Obama targets the Bain of Romney’s capital

“Mormons believe that they are destined to save the United States of America,” he said. According to church founder Joseph Smith Jr.'s prophecy, “They think that God is going to send the 'One Mighty and Strong' who will sort things out. They may not tell you this, but many, many people out there,” he gestures to the Salt Lake street outside his living room window, “believe that Romney is that man.”

Despite Romney’s status as a respected elder in the Church of Jesus Christ of Latter Day Saints, and his public piety, the judge does not think that Romney’s faith poses any contradiction or threat to his candidacy.

“Romney answers to no one but himself,” said Dimick. “There is no danger that he would take a position harmful to the United States just because some Mormon told him to.”

The candidate is in the middle of a delicate balancing act, he added — trying to retain his Mormon base while appealing to the wider electorate.

“Romney has to tightrope it,” said Dimick.

The greatest problem with Romney, added the judge, is something that many have remarked upon — the man’s seeming lack of core beliefs or principles.

“Romney will say or do anything to get elected,” said Dimick. “But the man is as hollow as an empty 50-barrel drum.”